Gowdy hoping for more of the same on Christmas morning 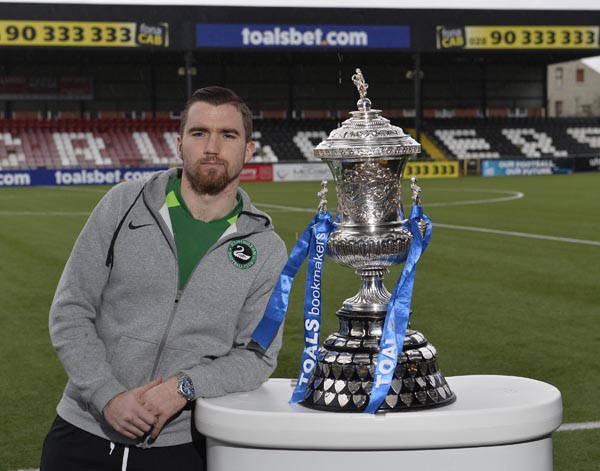 THE venue, the crests and the location may be the same, but Newington versus Linfield Swifts will be a very different clash than that of the Steel and Sons Cup final of 2017.

On that occasion, Newington triumphed 1-0 thanks to Padraig Scollay’s winning goal and this year’s Christmas Day final is a repeat of the 2017 decider.

Yet, both teams are vastly different entities this time around. As a development squad, many of the Linfield Swifts players from 2017 have either moved into the first team at Windsor Park or have moved on.

Similarly, Newington have only a handful of survivors from that cup-winning squad, including captain Richard Gowdy.

He insists that the importance of the Steel and Sons Cup is not lost on the newer members of the squad and says they are determined to taste glory in the prestigious competition once again.

“It is instilled in them from the very first round,” said Gowdy.

“They know from the team talks and how the preparation is done – there is a clear focus on how important it is to everyone involved at the club.

“Those who have come in who weren’t there two years ago, after speaking to the likes of myself or any of the other survivors, they then want to be a part of that.

“In 2017, it was an unbelievable feeling when that final whistle went. I hope we can provide that feeling for the young lads coming through and give them their first taste of silverware.”

When the sides met at Seaview two years ago, Linfield carried the burden of favouritism into the final as 10-time winners of the Steel and Sons Cup and as defending champions.

This time around, Gowdy insists Newington aren’t under any addition pressure after lifting the cup in 2017.

“It is a new year and a few squad. We weren’t involved in the latter stages last year,” said Gowdy.

“It is anything else, once you win it, you want more. We experienced it for the first time two years ago and we want to win it every year.

“I don’t think there’s any extra pressure on us this year. You are under a bit more pressure in every cup game. They are knockout competitions – if you don’t turn up, you are going to lose.

“If you work hard, you merit your place in the final. We feel we deserve to be in the final and we want to go the whole way again.”

While the Steel and Sons Cup is on the immediate horizon for Newington, they remain in promotion contention in the Premier Intermediate League after a strong start to the season while their recent 8-1 defeat of Craigavon City put them into the third round of the Intermediate Cup.

In the new year, Gowdy will have other commitments as the GAA season gets underway once again.

A key member of the O’Donovan Rossa Gaelic football team, he admits the commitments can be tough to juggle, but he wouldn’t have it any other way.

“It is difficult at times – I don’t really get a break,” said Gowdy.

“I’m playing 12 months’ a year. Come January or February when the pre-season starts for the GAA, I’ll be in and out with those sessions. I’ll not be able to fully commit. It is about managing your body and managing the sessions.

“The games and trainings are on different days. You do what you can to try and do your best for both codes.

“I manage it myself and speak to both managers as well. By the time the GAA season starts, it is crunch time for the football season. You could be in the latter stages of the Intermediate Cup or going for leagues.

“For Rossa, last season was about getting back to Division One, back to where we feel we belong and this is the year to prove we belong there and we have to get the season off to a good start.”