Harbinson calls for leagues to be completed 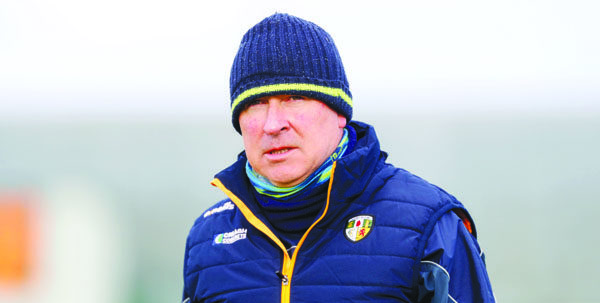 ANTRIM senior football manager Lenny Harbinson remains hopeful that there will be a return to inter-county action later this summer and has reiterated his call for the GAA to finish the 2020 Allianz Football and Hurling leagues.

Harbinson also expressed his disappointment at comments made by GAA president John Horan earlier this month.

Horan not only stated that Gaelic Games are unlikely to return while social distancing remains in place, but he also cast doubt on the leagues finishing despite an earlier commitment from the association to do just that.

In an interview with The Sunday Game, Horan stated: “I can't see it happening to be quite honest. If social distancing is a priority to deal with this pandemic, I don't know how we can play a contact sport. That is what Gaelic games is. It is a contact sport.

“When you look at the level of contact in sports, scrums in rugby are probably at a different level. But I don't think to say our games are non-contact is correct, no.”

He added: “I think this year's Championship would have to start in 2020 and go into the first two months of 2021.

“After that, if we're back in action, we would have to move on and get on with the 2021 competitions. At this stage I would be inclined to say we will struggle to finish the league.”

Horan’s comments haven’t been well received in counties with a vested interest in completing the 2020 league campaign, especially Antrim.

Harbinson’s men were strongly placed to gain promotion from Division Four prior to the Covid-19 pandemic and needed wins over Wicklow and Waterford to confirm promotion while Antrim were set to face Kerry in the Division 2A hurling final.

“I felt and I still feel the GAA acted swiftly and decisively and with clarity in tandem with the Irish government when the lockdown happened,” said Harbinson.

“My frustration over the last number of weeks has been that there seems to be mixed messages now coming out of Central Council.

“John Horan stating at has to be clubs first and there might not be any senior inter-county activity was one message. Other messages that have filtered through were that the clubs would start and the county footballers and hurlers across the nation would get a few games under the belt. The county season would then start some time in August to complete the football and the hurling leagues then you’d be straight into a knockout Championship.

“I’ve been disappointed with the mixed messages other the last few weeks. I’m not sure how aligned the president is with Tom Ryan (GAA Director General) and the executive who actually run the GAA on a daily basis.

“I think the GAA have been lacking in terms of producing a roadmap. Obviously this is a very dangerous virus and dates can change, but a roadmap to the future would have been helpful. They could have taken a leaf of the Irish government’s book and said this is phase one and that’s what it looks like. I think people need a bit of hope at this very difficult time and people would appreciate something to look forward to.”

The Antrim boss also disagreed with Horan’s view that clubs should return before county teams, arguing the point that, simply in terms of logistics, club games would be too difficult to manage.

“For me, the club is the wrong starting point simply because, if you look across Ireland, you’ve 32 counties, hurling and football with a core of around 2,500 people,” said Harbinson.

“That’s a lot easier to control and monitor than clubs. One club in Dublin could have a membership of 2,500 – you are talking about tens of thousands of members across Ireland descending upon their Gaelic pitch.

“It is easier to control and monitor a small group of people, which happens to be county players as we feel our way through this pandemic, so it doesn’t make sense to me.”

Harbinson’s comments come after the publication of Sport NI’s ‘Framework Guide’ last Friday which sets out advice and guidance for the resumption of sport and physical recreation as the coronavirus restrictions are gradually lifted in the North.

The framework sets out at what stages of the Stormont Executive five-step plan various sports can resume and in what manner.

The document seeks to assist sporting organisations develop their own return protocols including training and competition.

The Framework takes account of the geographic context within which sport operates here with some organisations working on an all-island basis and others on a UK or NI basis.

The framework also provides for all sports, including outdoor recreation, from grassroots level to high performance sport and professional athletes.

Antoinette McKeown, Sport NI CEO, said: “There is a huge appetite across sports; athletes, coaches, fans and spectators to return to sport and many sports are actively planning how to implement the first step on this pathway.

“We commend the leadership which sports have already shown in responding to Covid-19 and recognise that, through responsible actions within each phase and at each of the five steps of the Executive's pathway to recovery, all sport participants can play their part in gradually and safely transitioning NI towards a new type of normality.”

You can view the framework and timetable for resumption here: