Healthy food has never been this tasty 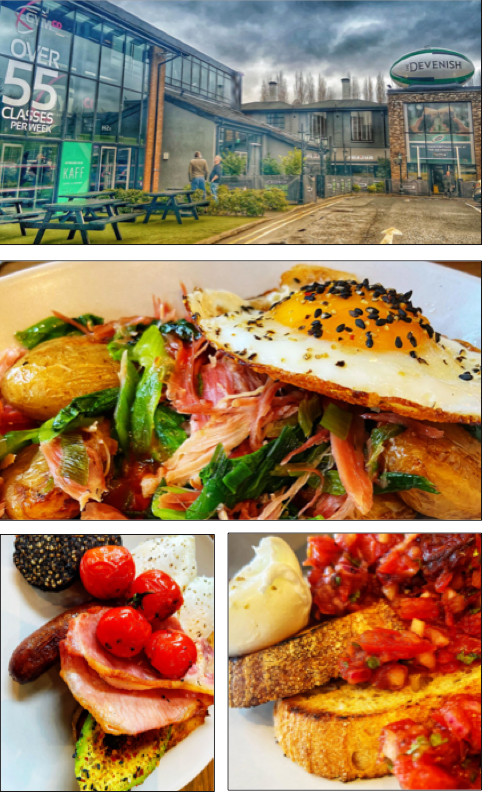 UNGUILTY PLEASURES: From top, the new Kaff at the Devenish Complex; the ham hock was melt-in-the-mouth; the all-day breakfast (bottom left) is that thing you thought never existed – the healthy fry; toasted sourdough with smashed avocado, smoked salsa and poached eggs

YOU could be forgiven for wondering why a new café has opened so close to one of the busiest gyms in West Belfast. After all, who wants a feed after healthy work-out?
However, Kaff is a café with a difference. Located beneath GymCo in the grounds of the thriving Devenish Complex, Kaff offers a food and drink menu that is very much caterd for those gym-bunnies who hop by it daily.
From a range of breakfast items to an all-day brunch, there is something for everyone on the menu – and for those who want a ‘cheat day’, fear not, Kaff offers a selection of freshly-made traybakes too, including caramel squares, raspberry ruffles and chocolate brownies.
It was a Thursday lunchtime when myself and two colleagues paid a visit to Kaff, which opened a fortnight ago. We were shown to our table by a friendly and helpful member of staff.
We were assured the coffee is very popular, so it would have been rude not to order my favourite, the simple, timeless, classic Cappuccino. An Americano and what I would call proper tea – the one in a pot with tealeaves – completed our drinks order.
On to the food and the menu was a challenge – in a really, really good way. You can be as creative as you want using the ever-popular sourdough bread, eggs cooked the way you like them, not to mention salads, sandwiches, smashed avocado and beans.
As it was lunchtime, we were drawn to the mouth-watering choices on the main food menu. I was immediately attracted to the ham hock, served with crushed potato, spring onion, spinach, a fried egg and siracha sauce. As someone who’s not exactly a gym regular, the dish was what I would describe as on the middle-range of healthiness.
The pulled ham hock was melt-in-your-mouth stuff and full of flavour, perfectly-accompanied by some expertly-cooked potatoes, spinach, spring onion and perfectly fried egg, all bound together with that hot kick of siracha sauce. Every bite was mouth-watering and I would not hesitate in rushing back to Kaff to order again- it was that good. Priced at just £8, it was great value for the generous portion.
Across the table, a colleague was feeling creative and opted for toasted sourdough, complete with smashed avocado, smoked jalapeno salsa, poacher and black sesame. The dish had an abundance of flavour and he described it as “refreshing” given that nice kick thanks to the jalapeno. You can do a lot with sourdough bread, as you will see in many cafes across Belfast, but Kaff’s offering was unique and clearly a lot of thought was put into it.
Our final lunch-goer couldn’t resist trying Kaff’s all-day breakfast – or to put it more factually, “a healthy fry”. It is was not a surprise to learn this is already proving to be a real hit with customers already – and it’s not hard to see why. It was made up of black pudding, beef sausage, grilled bacon, cherry tomatoes and some of the best poached eggs I have ever seen, all served with the aforementioned sourdough bread and smashed avocado.
My colleague was particular impressed by the smashed avocado and plans a rapid return just so his better half can give it ago. I have to admit I was kind of jealous when it was brought to the table. For just £7, you’d go a long way to find that quality at that value.
With our stomachs satisfied, we resisted the temptation to go for an after-lunch traybake, but I was instructed via phone by a colleague back at the office to return with a chocolate protein ball, which I was duly informed is essential for that tasty little bit of extra energy to get over the line in the weekly parkrun.
Kaff is serving food and drink with a difference. If, like me, you have tended to pull a face whenever you’re hungry and healthy food is mentioned, then,l again like me, you’re in for a very pleasant surprise.