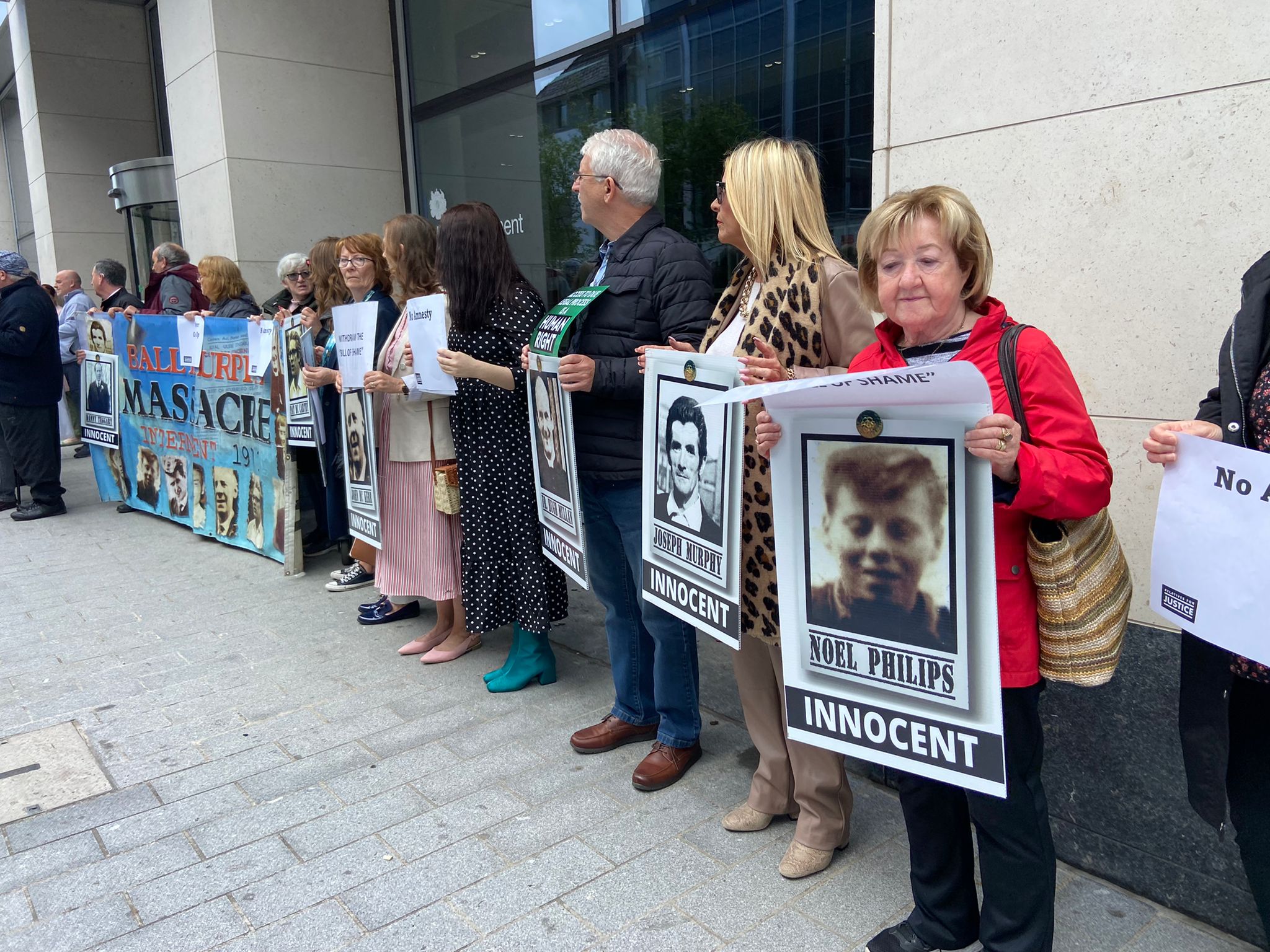 STANDING UNITED: Families protest against the Legacy Bill in Belfast on Tuesday

FAMILIES bereaved through the Troubles have spoken of their heartache during protests in opposition to the the British Government's controversial legacy Bill.

Victims' campaigners staged protests in Belfast, Derry and London to coincide with the second reading of the Bill in the Commons on Tuesday.

The so-called Legacy and Reconciliation Bill seeks to replace police investigations and due court process with an information "recovery and reconciliation body", which could offer amnesty for Troubles killers.

Natasha Butler's grandfather Paddy Butler was among five people murdered by the British Army in the 1972 Springhill-Westrock Massacre in West Belfast.

She told protesters gathered at the NIO's Belfast Office that the government's proposals were a "clear breach of its human rights obligations.

"We finally had our inquest granted, and we were one step closer to achieving the truth and accountability that we sorely deserve," she said.

"Now we see that cruelly and painfully taken away from us by the British Government's legacy Bill. This constitutes a breach of trust, a complete disregard for victims and all families stood here today. It has destroyed our hope of establishing the truth surrounding our loved ones' murders."

She added: "I can assure you that we are all united in total opposition to this Bill of shame."

Tommy Duffin, whose father Jack Duffin was one of the five people murdered in the 1992 Sean Graham Bookies massacre, described the Bill as a "kick in the teeth".

He branded the proposals a "total cover-up".

"This Bill is just to protect the very few," he said.

He continued: "The recent Police Ombudsmans' report said there was 28 murders with eight known agents involved.

"They were allowed to go out willingly, knowing that they were going to kill more people, and they were still used as agents. It's the perfect example of why this Bill can't go through – these people are going to get off with it. They will never be named and people will never get closure."

Robert McClenaghan's grandfather Phillip Garry was murdered in the McGurk's Bar bombing in 1971.

He said that his "heart's broke" due to the legacy proposals.

"My daddy is now 92 – after today there is going to be no more hope of a prosecution or inquest or a civil case," he said.  "My heart is broken on behalf of my father and everyone who is standing here today, who basically just want truth and justice."

He said the proposed truth recovery and reconciliation body would not reveal the truth.

"If you've been covering up the truth for 50-plus years, what would make you change your mind if you were part of the British Government, the RUC, or the British Army disinformation team?" he stated.

"I have no confidence whatsoever that my family or the rest of the McGurk's bar families will ever achieve truth or justice or acknowledgement."

Mark Kelly, whose 12-year-old sister Carol Ann was killed by the British Army, was part of the group who travelled to London to oppose the Bill.

“This Bill will deny all families who had loved ones killed truth, justice, and accountability, irrelevant of who the perpetrators were," he said.

“It will close down investigations, inquests, Police Ombudsman inquiries, and civil cases.

“These investigative processes are working perfectly well, and to good effect, on behalf of families save for interference by the British government.

“That is precisely why the British government has unilaterally tabled this amnesty Bill despite being fully aware of universal opposition to their amnesty plans. There is no support for this Bill whatsoever.

“The Irish government, all the political parties here, and the opposition parties in Britain oppose this Bill but most importantly victims from across the community oppose the Bill.