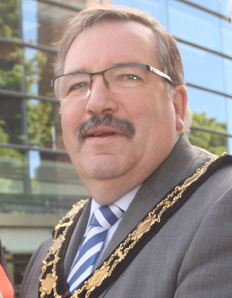 ONE of the UUP’s most high profile members has sensationally quit the party after declaring his unhappiness at how the local party is being run.

Cllr John Scott announced his resignation from the party to a stunned Antrim and Newtownabbey Borough Council chamber on Tuesday night at the August meeting of councillors.

Speaking to the North Belfast News, John said he was leaving because of internal party wrangling.

“This is more to do within our own grouping that anything else. It’s nothing to do with the party,” he said.

John, who served as Mayor last year, said he had considered his move and his mind was made up after an attempt to address the issue was ignored.

“This isn’t a step I’ve taken lightly, it’s something I’ve though long and hard about.

“We had our group meeting the other night and I tried to raise the issue but other group members were more interested in listening to the cricket than discussing it. But as I said, this isn’t about the Ulster Unionist Party who will continue to have my support as an independent, this is about the grouping within the council.”

The North Belfast News contacted the UUP press office however no response had been received at time of going to press.

Cllr Scott says he will serve as an independent councillor and has no plans to join another party.

“Council can confirm that at the Council meeting on Tuesday 29 August 2017, Councillor John Scott informed the Council of his intention to serve as an Independent member of Council.”