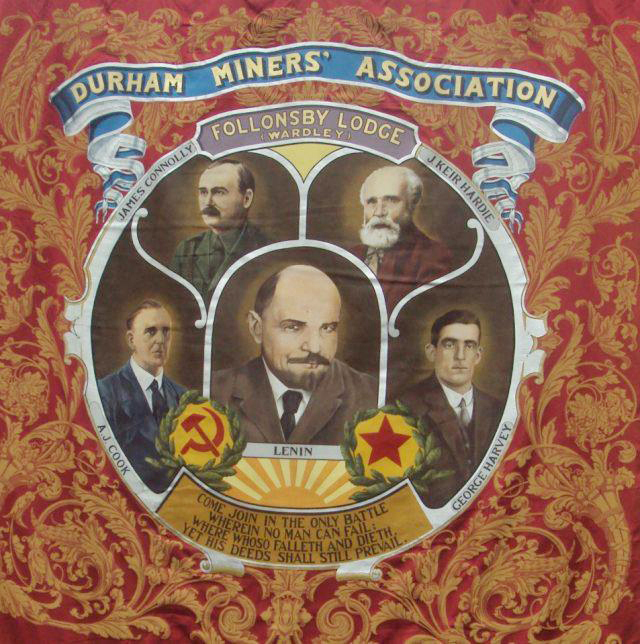 A controversial historic banner commissioned by English miners in the 1920s and featuring an image of James Connolly will be on display in Belfast this weekend.

The Follonsby Lodge banner was woven for the Durham Miners Association in 1928, just four years after the General Strike. In a reflection of the radical and militant mood of the time, it depicted, amongst others, iconic Irish republican socialist leader James Connolly and communist revolutionary Lenin – a co-founder of the Soviet Union just 11 years earlier.

But it wasn’t the Red Menace that made the banner controversial – the depiction of an Irish rebel on an English workers’ banner attracted negative attention and it was burned in mysterious circumstances in the 1940s.

In later decades the damaged banner remained a bone of political contention, and when the time came for it to be repaired Connolly’s image was dropped in favour of a succession of English workers’ leaders..

However, thanks to the efforts of the National Union of Mineworkers, working in conjunction with political activists and members of the Irish community on Tyneside, the original banner was recently restored to its original condition at a cost of £7,000.

The banner is being brought to Belfast by veterans of the 1984/1985 miners strike, including former miner and NUM organiser Dave Douglass, who is also the author of a book on the history of the miners in which the banner features.

The English delegation will join the main Belfast May Day rally on Saturday after which they will address a lecture in the Belfast Unemployed Resource Centre on ‘Lessons of the Miners’ Strike’.

The group will be in the city as guests of West Belfast republican ex-prisoners’ group Teach na Fáilte, whose spokesperson Gerard Murray said many people in the city will have an affiliation with the banner and what it represents.

“It’s a great honour for us to host this delegation of workers in West Belfast, as well as the Follonsby banner, an object which should hold great significance to all Irish workers, socialists and republicans alike,” he said.

“The miners’ strike struck a chord with most people in West Belfast, who amongst other things associated with the miners struggle against Margaret Thatcher, and indeed some who went on to become republican socialist prisoners were active on the streets along with the miners in 1984, so this is a very important visit for us all.”

The Follensby miners banner will be on display at the Belfast Unemployed Resource Centre, Donegall Street, following the main May Day rally on Saturday, May 2, which gets under way at noon.