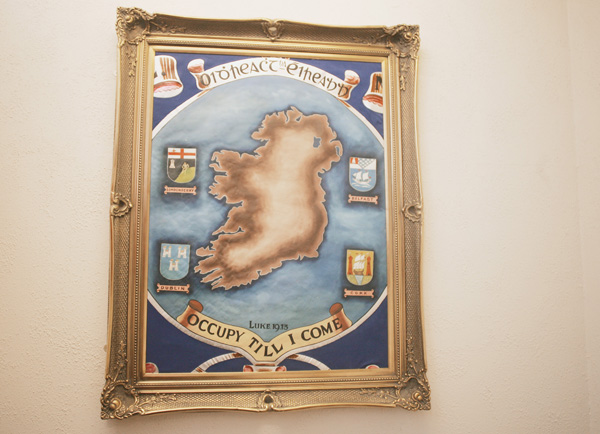 IDENTITY CRISIS: This painting of Ireland in the Orange Hall in Clifton Street is headed Oidhreacht na héireann, which translates as Ireland’s Heritage

LAST week Edward Stevenson, Grand Master of the Orange Order, declared that the Orange Order had no quarrel with those who enjoy the Irish language and wish to use it and that it had never sought to deny anyone the right to enjoy those traditions. Fine words, but history tells a different story.

During the Second World War the London government, desperate to recruit soldiers from the entire island of Ireland, encouraged northern unionists to develop a positive attitude towards Irishness. The Orange Order had other priorities.

At the December meeting of the Grand Orange Lodge of Ireland in 1942 the following resolution was discussed and adopted: “That the Government of Northern Ireland be asked to remove from the Curriculum of the Ministry of Education the Irish language, and that no facilities be given in public, secondary or elementary schools for the teaching of such.”

The Prime Minister of Northern Ireland, John Andrews, who was present at the Grand Lodge meeting, promised Joseph Davison, the Grand Master, that he would look into the matter to see how far the wishes of the Grand Lodge could be followed. On 17 December he sent a copy of the resolution to John Robb, the Minister for Education, with a note explaining his own view.

“I, personally, feel strongly that the teaching of Irish – the chief object of which is to foment antagonism to Great Britain and the second to gain a preference for those possessing this knowledge to obtain employment... in Eire – should not be paid for by us.”

He wanted Robb to tell him what to say in his reply to the Grand Lodge.

Ministry officials began gathering information at once to brief Robb. Amongst their papers was an interesting circular from the Welsh Department of the British Board of Education which was closely examined by senior officials in the Ministry, including Reginald Brownell, the Permanent Secretary. It was a glowing report on the efforts of the Board to encourage and support the teaching of Welsh in the schools of Wales. It even included the text of an apology made to the Welsh people in the British House of Commons by the President of the Board on behalf of the government for its negative attitude towards Welsh during the previous century.

On Christmas Eve 1942 Brownell wrote a short briefing note to Robb. He recommended no change to the current position affecting Irish. The only alternative, he said, was to issue a regulation banning the teaching of Irish in schools. The result, he declared, would be disastrous.

“Such a regulation would merely have the effect of increasing the spread of the language in the Roman Catholic schools; without a doubt all the schools which at present teach it would continue to do so after school hours, they would be joined by others who at present don't bother about it; and a situation would develop which would be disastrous for Northern Ireland – all this at a time when the Board of Education is taking the most active steps to stimulate the learning of Welsh in the schools of Wales.”

On 7 January 1943, Robb wrote to the Prime Minister. First, he gave him a summary of the current position with regard to the teaching of Irish in schools, emphasising that in all circumstances the regulations forbade any form of compulsion. Turning then to the Grand Lodge's resolution, he said that it was based not on educational but on political grounds and would involve the prohibition of Irish in schools. Dealing next with government’s educational policy he explained that it was based on the fundamental principle that when there was a demand for the teaching of any subject the demand should be met, so far as the course provider could do so reasonably within available resources. Moving on to the question of Irish he said that the demand for it was quite clear and that the language was also taught and examined in Queen's University, Trinity College, Dublin, and the National University of Ireland. He also mentioned that Scottish Gaelic was taught in Scottish universities, adding, “... and over and above that the Board of Education in England is at present busy with an effort to extend and develop the teaching of Welsh in Wales. For us now to forbid the teaching of Irish in our schools in face of the obvious demand for it would have a very awkward look.”

Commenting next on the unionist view, shared by the Prime Minister, that Irish was demanded for political reasons, he said that there probably was an element of truth in it, but pointed out that past unionist agitation to have grants withdrawn from the subject had had the opposite effect from the one intended, because it had increased rather than decreased demand for the language in schools by drawing attention to it. Reiterating Brownell's warning that the complete prohibition of Irish would most likely boost the teaching of the language in schools, he revealed another danger, “… and [prohibition] would have this further disadvantage that whereas now, the books used are under our supervision, and are politically innocuous, then we should have no control whatever over books or courses of teaching.”

He argued next that Catholic pupils needed to study Irish for certain careers including the priesthood and said that he could not see how the subject could be withdrawn when previous generations had had access to it. Finally, he declared forcefully,

“The position is this: the Manager of an elementary school or the Governors of a Secondary School may devote part of their pupils' time to learning Irish. If they do, in your opinion and mine the pupils might be much more usefully employed. But they do not think so, and the matter is one for them. Under our regulations we see that they do not make the subject obligatory and they must provide an alternative for any pupils not wishing to take it. But the choice is for them, and is part of that freedom of the individual for which we profess to be fighting this war.”

A week later the Prime Minister wrote to the Grand Master emphasising the dangers of prohibition.

“If we were to forbid the teaching of this subject, the effect would be that it would be taught somehow, somewhere, with no control over the books or the courses of instruction, and such a step, with the inevitable controversy which would arise, would probably have the effect of encouraging the teaching of Irish more generally and along lines much more detrimental to Ulster than at present.”

Personally he would have been glad, he said, to have the teaching of Irish stopped altogether but informed Davison that it did not appear to be possible.

The Orange Order will need to be more open about its past role as an agent of ‘militant cultural imperialism’ before its contribution to the present debate about an Irish Language Act can be taken seriously.