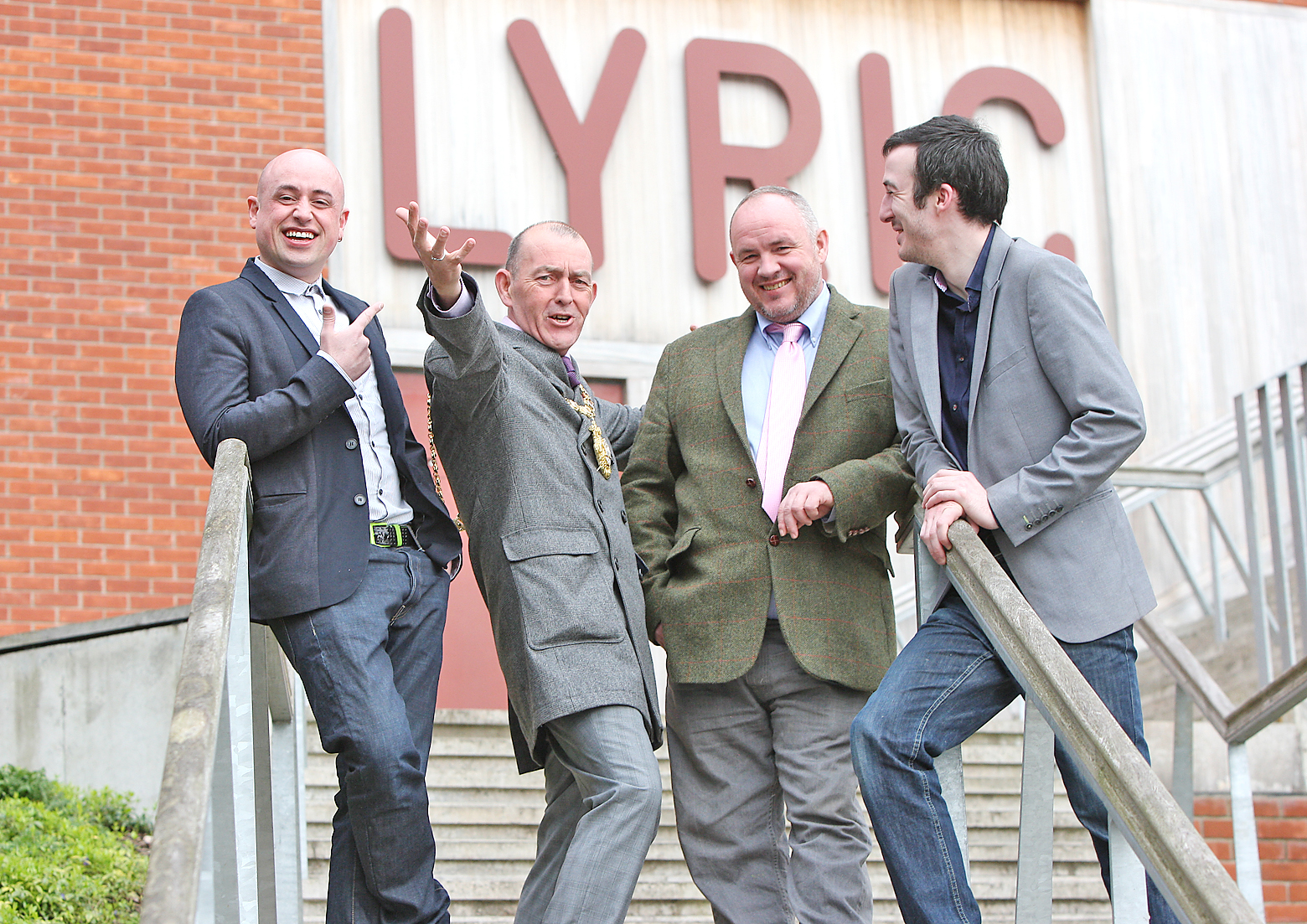 Writer of Man In The Moon, Pearse Elliott, centre right, with actor Ciarán Nolan, right, and artistic director of Brassneck Theatre Company, Tony Devlin, with Belfast Lord Mayor Arder Carson at the launch of the play at the Lyric Theatre

Following an acclaimed run of shows overseas, the hit play Man in the Moon is set to return to Belfast and the Lyric Theatre next week.

A hilarious one-man show with deeply poignant undertones, Man In The Moon tells the story of Sean Doran, a young dad struggling to deal with everything that life has thrown at him. The play traces Sean’s thoughts as he sits at Lenadoon’s Half Moon Lake with a carryout on a moonlit night reflecting on his past and present troubles.

Along with classic West Belfast humour, the production tackles wider issues around mental health, suicide and the economic struggles of ordinary people. During its original run it met with critical acclaim while a series of sold-out shows at the Roddy’s led to bigger productions at the Baby Grand and Waterfront Hall theatres.

After a four-week off-Broadway run in New York City last year at the Irish Theatre Festival, the play was nominated for the Best Writer, Actor and Director awards. The latest overseas venture for the Brassneck theatre company was a series of sold-out shows at the Bozar theatre in Brussels.

Daily Belfast caught up with playwright Pearse Elliott, lead man Ciarán Nolan and director Tony Devlin to discuss bringing the play back to Belfast and how the more colloquial elements of the play travel.

“We’re excited to bring the play back to Belfast and see if we can attract an audience who might not normally go to the Lyric” says Tony.

“We'd also like to see Lyric regulars identify with the character, to take people out of their comfort zones,” says Pearse. “Obviously there are bits of the play that are specific to West Belfast but we are dealing with universal themes. The character is an amalgamation of a lot of what young people face today in terms of disenfranchisement and alienation, it resonates with audiences everywhere, whether Belfast, Glasgow, or New York.”

While the play tackles the tough topic of suicide and its too-frequent occurrence in working class communities across Belfast, those involved equally emphasise that the play also offers a positive message about survival.

“The play is bigger than suicide,” adds Pearse. “When we first embarked on the play we discussed its themes and while suicide is one, it is approached subtly. It’s not didactic or heavy-handed. Our goal was to immerse the audience in the character’s journey.”

And what about the actor with the physically and emotionally demanding task of portraying such raw and varying emotions?

“For me, the play is ultimately about hope,” says Ciarán.

The last two nights of Man in the Moon at the Lyric have sold out. Limited tickets are available priced at £16. Contact the Lyric box office on 02890381081.