Hot-potch of characters brought to life at The Threepenny Opera 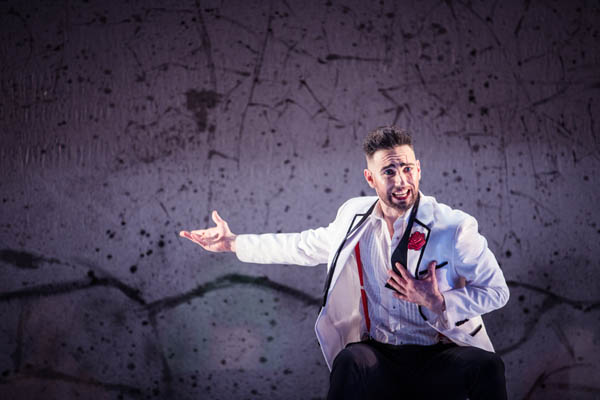 WITH tickets in hand we took our seats for the Lyric Theatre’s The Threepenny Opera with all eyes drawn to the dazzling set.

Steep stairs, flecked with neon are decked as such that I initially thought the cast were about to do a few tap numbers but all was to become clear once the first notes from candy striped members of the Ulster Orchestra struck up.

Actress Kerri Quinn, playing madam Jenny Diver, slinked out to the strains of crooner classic Mack the Knife setting the scene as we were introduced to a bunch of bawdy colourful characters wheeling and dealing in London’s underbelly on the eve of Queen Victorian’s coronation.

The costumes are a visual treat with anti-hero Macheath played by Mark Dugdale, resplendent in fitted tux and bow tie, more a suave 007 than the sinister lowlife who’d rob your last pennies should the notion take him.

The play begins with Macheath having secretly married Jayne Wisener’s Polly Peachum, much to the despair of her parents including her father Jonathan (Steven Page) who just happens to be head of all of London’s pickpockets. Determined to have Macheath hanged Jonathan sets out to have the rogue arrested but Mack won’t give up without a fight. All actors were in pitch perfect form and managed the stairs with aplomb as trapdoors dotted throughout the stage made way for hasty cast entrances and exits. Threepenny Opera marries the songs with the action on stage well marking a bold start to the Lyric’s 50th year programme.

The Threepenny Opera runs at the Lyric Theatre until February 10.