Huge weekend of basketball ahead at St Malachy’s International Supercup 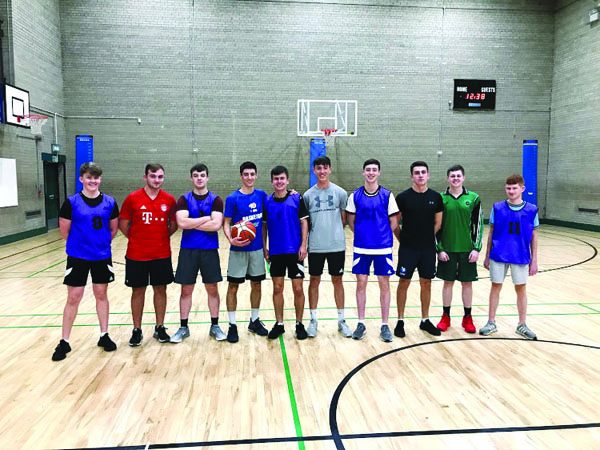 The organisers taking part in a team bonding session

TEAMS from throughout Ireland and England will take part in a four-team basketball tournament this weekend for the St Malachy’s International Supercup.

The Antrim Road school’s competition is the brainchild of 10 A-Level Sports Science school pupils who were given the task of running an event as part of their A2 coursework.

Having considered various options and in keeping with the North Belfast college’s rich tradition in the sport, they decided to run an U15 international basketball tournament and their vision will become a reality on Saturday and Sunday this week.

Taking part in the competition is the host school as-well-as Killester Basketball Club from Dublin and Sliabh Luachra, Rathmore from Kerry, while Cheshire Phoenix will make the trip from England to take part.

While still considered a minority sport, basketball is certainly one on the rise and its growing popularity is translating into bodies on the court with high-profile competitions such as the Belfast Classic giving young players the opportunity to watch top American college players up close.

There has also been a boost for the game thanks to the exploits of Belfast Star in the Irish SuperLeague with Adrian Fulton’s team building on a positive last season to push on this term where they currently are at the top end of the table heading into 2020.

“The purpose of this tournament is to promote basketball in the country,” said one of the tournament organisers, Conor Ryan.

“Recently, it has been on the rise which is great to see. The Belfast Classic in 2017 and 2018 really helped create awareness about basketball in Belfast.

“The recent success of Belfast Star basketball team as they sit joint top of the Super League shows how basketball is improving here.

“Every game I notice more and more spectators at La Salle to watch Star play on a Saturday night and it’s great to see such a buzz about the city thanks to their success.

“We want to continue inspiring participation in the younger generations through this tournament, by engaging local governing bodies (we have gained a sponsorship from Basketball NI) and by providing exposure of this sport.”

Running a competition of this nature is not simply about inviting teams and throwing a ball onto the court.

Much planning and preparation has been required with sponsors coming on board and logistics to coordinate for the visiting teams.

The St Malachy’s pupils have also decided that the wider community should benefit from this tournament and they have nominated two charities who will avail of any profits made over the weekend.

“We have received funding from a number of sponsors to help run this tournament,” added Conor.

“Sponsors such as Eterna, J&F group, Boost, and Basketball NI. After having paid all expenses such as accommodation for the teams, we plan to have some money left over.

“We plan on donating this money to two charities: TAMHI (Treating All Mental Health Issues) and Lighthouse.

The tournament takes place at St Malachy’s Sports Hall with the action beginning at 9.45am on Saturday and 10am on Sunday with the final scheduled for 1.15pm on Sunday.