THE MOTORMAN – GERRY FALOONA: Hyundai give the enthusiasts what they want 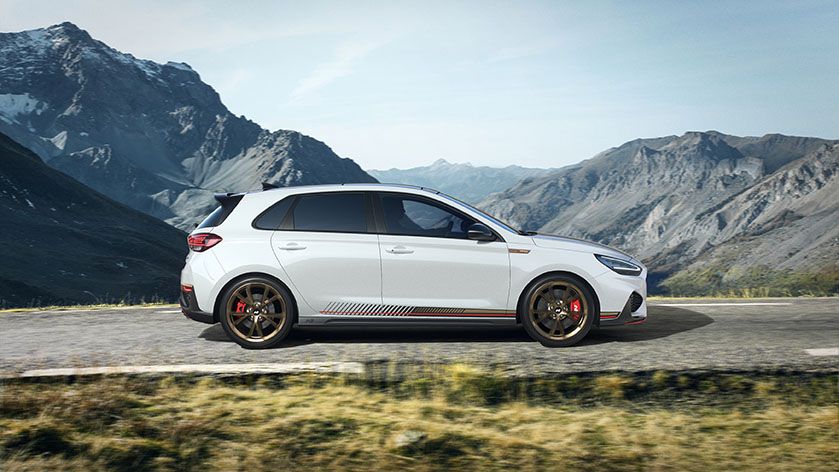 HYUNDAI has announced the i30 N Limited Edition

HYUNDAI has announced the i30 N Limited Edition, an exclusive special version of the high-performance Hyundai i30 N.

This unique edition of the i30 delivers the same high-performance driving experience but with a distinctive exterior and interior design. The limited run of 800 units began production in the last week of April, with 75 vehicles destined for our market, but you better be quick.

To develop this Limited Edition, Hyundai listened to feedback from Hyundai enthusiasts using market and media feedback and its community of Hyundai N fans who have for years been modifying their i30 vehicles. The exclusive edition is available in two body colours, Phantom Black Pearl and Serenity White Pearl. The i30 N Drive-N Limited Edition is equipped with the i30 N’s 2.0 T-GDi engine, with a peak power of 276bhp, combined with an eight-speed gearbox and three performance boost button functions for an even sportier experience.

The exterior will feature 19-inch alloy wheels in a dark bronze matte finish; black badges; special decals on the side, front, and rear; and two N badge decals on the sides. This high-performance i30 was developed, tested and honed at the world famous Nürburgring-Nordschleife racetrack, that’s where the ‘N’ in the name comes from. Inside, each car is fitted with a unique numbered badge, depicting its position among the limited volume of 800 total units. Alcantara with red stitching covers the steering wheel, gear lever, armrest, and handbrake with red accents throughout, and exclusive floor mats.

The new 130 N is expected early summer and Daly’s Garage on the Falls Road is the local Hyundai dealer.

Drama in the Holywood hills as Menzies takes the honours


IF you have never heard of hill climbing, let me give you a quick overview. It is a form of motorsport which as the as the name suggests involves racing uphill, and the more bends that can be fitted in the better.

Hill climbs are usually on a closed public road and the quickest up the hill is the winner. The cars that compete might surprise you, though, as there is everything from Minis and Cleos right up to incredibly powerful single-seater F1-style race cars.

Last Saturday was the turn of Craigantlet in the east of the city and this event was to be a round of the British Championship. Wallace Menzies, a driver from Alloa in Scotland, clearly demonstrated why he is the current Avon Tyres British Hill Climb Champion by setting the fastest time of the Day. He also won his class and rounds three and four of the Hill Climb Championship – quite a haul. And to make it a family affair, his wife Nichola was the fastest lady up the hill for the second year in a row.

Craigantlet was the second round of the Millers Oils ANICC Hill Climb Championship and it provided some great drives from local drivers, the pick of which was Tim Woodside from Dunadry in his Pilbeam. Not surprisingly, due to the wet conditions no hill records were broken this year. Clerk of the Course, Wilson Carson, took the opportunity in his drivers’ briefing to thank all the sponsors, volunteers, residents, marshals, competitors, and spectators for their support for one of the oldest hill climbs in the UK, with next year’s event being the 110th anniversary climb.

A few minor excursions into the scenery resulted in dented pride and some modified car bodies, but thankfully no-one injured and the event finished on schedule. Great to see two more women drivers featuring on the hill for the first time: Ruth Nugent from County Meath in a Mini Cooper, and Amy Hawthorne from Belfast in a Renault Clio.
Bring on 2023.


MAX Verstappen passed the Ferraris of Charles Leclerc and Carlos Sainz to win the inaugural Miami Grand Prix for Red Bull despite a late safety car that saw championship leader Leclerc put the defending champion under intense pressure in the closing stages of a thrilling race at the new Miami International Autodrome.

Verstappen’s third win of the season was set up at the race start. Polesitter Leclerc made a good getaway to take the lead but Verstappen, on the clean side of the grid in P3, also got away well. As the field raced towards turn 1, the Dutchman drew alongside second-placed Sainz and taking a wide line into the first corner he held his line and his nerve to pass the Spaniard. Red Bull’s Sergio Pérez was in fourth behind Sainz, Alfa Romeo’s Valtteri Bottas fifth and Pierre Gasly in an Alpha Tauri was sixth.

Back at the front, Verstappen shadowed Leclerc through the opening phase of the race and on lap eight he closed right up to the Ferrari down the long back straight. He couldn’t make the move stick into turn 17 but as they crossed the line to begin the next lap, Verstappen got DRS again and swept past the championship leader into turn 1 to take the lead.

On lap 41 a safety car threatened to change the outcome of the race. Verstappen and Leclerc stayed on track, but Red Bull pitted Pérez and he was able to take on fresh tyres and re-join ahead of Bottas to hold fourth ahead of the Mercedes pair of Lewis Hamilton and George Russell, who benefited from a free stop behind the safety car.

When the safety car left the track the battle for the lead was intense. Leclerc closed in on the Dutchman and with the aid of DRS made repeated attacks. But, with better straight-line speed, Verstappen was able to keep the Ferrari at bay and on lap 53 of 57 began to pull away. The Dutch driver took his third win of the season, and the point for fastest lap, almost four seconds ahead of Leclerc. Sainz managed to hold off Pérez to take his ninth career podium with third place. Behind Pérez, Russell passed Hamilton in the closing stages to take fifth, Bottas was seventh, Esteban Ocon eighth in an Alpine, his teammate Fernando Alonso ninth and Alex Albon tenth in a Williams.

Leclerc leads the World Championship table but now only by 19 points from Verstappen. Third is Pérez, with Russell fourth and Sainz in fifth.