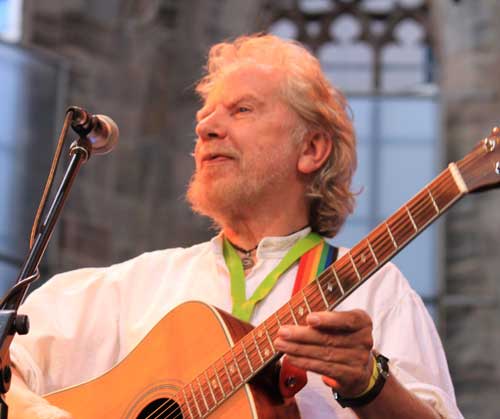 'I Can't Breathe' was featured in a two-hour live-streamed concert last week in which Irish musicians, the bulk from the USA, contributed works in support of justice and equality for African-Americans.

Rostrevor-based Tommy Sands, a member of the celebrated Sands Family clan, said that, having spent many years gigging in the US, he was very proud to have been asked to join in the musical rebuttal of racism.

"I have played music in every state bar North Dakota," he told belfastmedia.com. "The Irish Americans who attended our gigs would have been progressive people with no time for racism but there's no doubt there was a tension in society between the black community and the Irish community. At times, it was as if the blacks were trying to get on to the bottom rung of the ladder and the Irish didn't want to share that bottom rung with them."

As well as gigging with Mick Moloney's Green Fields of America ensemble in the seventies and eighties, Tommy also worked in prisons. "Almost everyone there was black or Latino," he said. "I met black people who had emerged from appalling neglect and poverty and effectively been raised as jail fodder."

During his time teaching in jails, Tommy conducted songwriting workshops. "I worked with a Judge Frances Doherty in Reno, Nevada, who had to make the decision whether to move a young person at the age of 19 from the youth facility into the tougher main prison system. A prisoner had the right to petition the judge in writing but the majority of these prisoners were uncommunicative and would never write a letter to anyone, never mind a person in authority. But the judge agreed to accept songs instead and some of the songs submitted by these young prisoners were very powerful and moving. It was a case of the tougher they are, the more fragile they are.

"We kept it simple, three verses and a chorus. First chorus about the past, second about the present, third about the future. When it came to finding a medley, I thought they would all know a familiar song from someone like Elvis Presley but in fact none of them had ever heard of Elvis. We settled on the one medley they did know in common, Twinkle, Twinkle Little Star."

After George Floyd's killing, Tommy says Mick Moloney gave him a call and asked if he wanted to join the roll call of Irish musicians donating their services to the Infinite Hope online concert. "Mike believes that a jig or a reel can be political, that a céilí dance in bringing people together is political because it creates unity in a room so he wanted to use our music to take a political stance," said Tommy. "I decided to write a song inspired by George Floyd's dying words, 'I Can't Breathe', but married to an earlier song I wrote called Your Daughters and Your Sons which is really about how those who die seeking justice and who think they have failed will see the seeds of freedom sown in future generations."

Tommy says he is hopeful that the Infinite Hope intervention will give any Irish racists in this country or anywhere else pause for thought. "To hate someone on the basis of the shade of colour of their skin is such an illogical position that it's hard to know sometimes where to start," he said. "But if you know the Irish experience of forced emigration then you can't fail to see the pain that others are suffering simply because they are different. We know about discrimination and inequality. Being Irish and not being able to identify with that in members of our own Irish family is not to be Irish at all."

At this time of year, Tommy is usually preparing for his annual Fiddler's Green Festival which brings hundreds of visitors to his native Rostrevor. "We've cancelled this year's event," he said, "and while we wouldn't like to do anything which would bring people to gather here in case they catch the virus but perhaps we may do something online."

You can see more about Tommy Sands, download his music or buy his memoir at his website.

I can't breathe. The air is leaving me.

I can't breathe, The air is leaving me.

His forefathers’ chains remain on the nation.

His forefathers’ pay was to hang from a tree.

Calling for justice, crying out for mercy.

Poisoning the air with the shackling of conscience

Bending the Bible to justify greed.

Poisoning the air with cowardice and silence

So not to hear nor heed.

You come from the shore of shadow and sorrow

Should we ignore the pain and the plea?

A Sister, a brother just another shade of colour

How can we breathe free?

How can we be free?