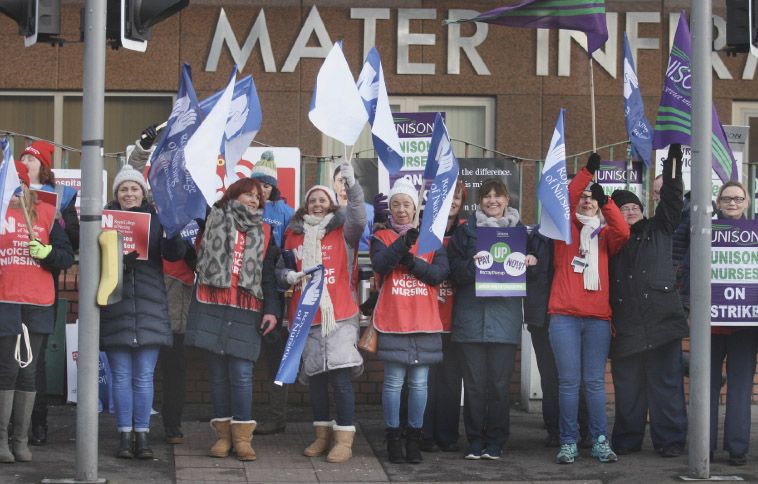 UNDERVALUED: Striking nurses is an all too common sight – and migrants face particular problems

THERE Is a crisis in the National Health Service (NHS) over the shortage of nurses.  The Belfast Trust is desperately urging all registered and unregistered nurses to go to work. There is a similar problem in the Western Trust area.

This serious problem will affect many patients in the coming winter months and government should act. If there is a crisis in Northern Ireland with domiciled nurses not attending work because of various unforeseen circumstances, the immigration authorities, politicians and the NHS should act vigorously in recruiting nurses from other parts of the world. An emergency situation calls for fast action. The Health Minister Robin Swann should really avoid all the needless international recruitment roadblocks and apply his powers, whatever they are, to urge the private companies to bring nurses forthwith.

Last week, the Belfast Trust used its social media handle to plead with nurses to come to work. When a busy large organisation like the NHS makes such an announcement anywhere, let truth be told, it is in a big crisis. “We are under extreme pressure as we care for an increasing number of sick patients. We are asking for any available nursing staff (both registered  and unregistered) who can help this afternoon, tonight and over the coming days to contact their department manager.”

There is this thing called brain drain.  It is being blamed for the unequal distribution of health sector workers around the world. It is true that an impoverished society will face more problems in their health services because of low numbers of doctors and nurses.

Private sector agencies are recruiting thousands every year from other countries and the poorer economies take the hit. There are two moral lessons here. The countries that are exporting their medical personnel to the outside world should pay them much better, that way they won’t leave their work stations to come to Northern Ireland. Also, the NHS system should appreciate the locally trained nurses and also pay them better. This is not a play with words. Nurses the world over are probably fed up with not being given the recognition, monetary or otherwise, that they deserve from their employer. Actually, while the new nurses are here, why are they the ones to suffer most in the crisis that the Health Service is going through?  When they arrive, their rights must be guaranteed as per the contract with their recruiter.

In my community activism, sometimes I see more than one should see. Only just the other day, I received a call from a union member of a nursing organisation who is based in England. She told me that a colleague who was directly recruited from Kenya  is in a crisis of her own because of how her agency contract was terminated when she had poor health. I phoned the trade union and one of their officials was tremendously helpful. Of course, because of data protection regulations, I had to urge the nurse that she would have to make the call herself and approve my conversation with the trade union.

The problem was not that she could not speak for herself, no. She had just reached the edge and could not take this situation anymore.

No foreign nurse or doctor should go through what this lady has to tolerate right here in Belfast. So the country needs nurses, but then contradicts itself by terminating the contract of a hardworking nurse because of her recent health issues?

• Elly Omondi Odhiambo is a writer based in Belfast  ellyomondi@gmail.com