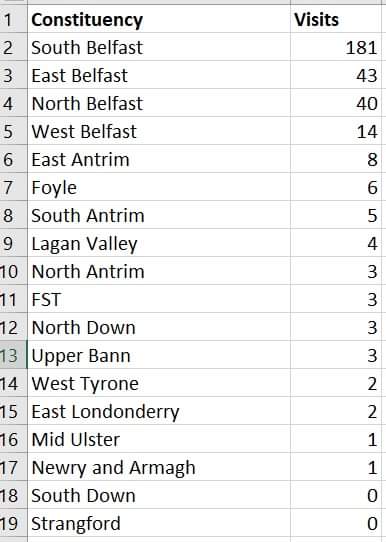 ONLY 14 visits were made to the West Belfast constituency by potential inward investors, hosted by economic development agency Invest NI, compared to 181 in South Belfast new figures reveal.
The figures for 2018/19 also show that East Belfast received 43 visits, while North Belfast had 40 visits. West Belfast is continually at the bottom of Invest NI inward investor figures for the city.
West Belfast MP Paul Maskey told the Andersonstown News that he has already requested a meeting with the newly appointed Invest NI CEO Kevin Holland to discuss his concerns and how the agency has “treated West Belfast over the years”.
“It is clear that these figures highlight the inequalities in certain areas,” he said.
“Invest NI have a history of igoring areas like West Belfast over the years and I will be stating that quite clearly at the meeting. Thankfully the unemployment rate in West Belfast has reduced in recent years, but it could be further reduced if Invest NI stepped up to the mark and brought potential investors to this part of the city.
“I will also be raising with them about their lands in West Belfast and what they plan to do to ensure they are used and developed to assist future investors. I will be insisting the new CEO recifies this ongoing inequality as a matter of urgency.”
SDLP representative Paul Doherty said that with significantly less inward investment visits taking place here than in other parts of the city, West Belfast is yet again “being left behind”.
“We want to see all of Belfast prosper, but this is simply unacceptable given the level of high unemployment and ongoing disadvantage experienced by the people of West Belfast.
“I will be calling for an urgent meeting with Invest NI to seek clarity on why West Belfast continues to receive unfair treatment. Invest NI has a responsibility to target areas of need and I will be making it clear to them that they must ensure that West Belfast is given greater priority going forward.”
The local rep said it is understandable why Invest NI have come under pressure to change the way they operate.
“These figures are testimony to that. This isn’t a one-off either, we have seen similar figures year in, year out which are consistent with the decline in investment and jobs in West Belfast and a constant flow elsewhere,” he said.
“At present, we have companies in West Belfast who are eager to expand and provide those all-important and much-needed employment opportunities. We also need to harness the potential of the talented workforce that already exists in West Belfast, and it is key that Invest NI assist companies in making that a reality.
“I have met with some talented entrepreneurs in West Belfast in the last number of months and they too are understandably frustrated at what they see as constant missed opportunities of bringing investors to this part of the city where they can engage and pitch the potential of this area for investment.
“We need to showcase West Belfast. The continued growth of Huhtamaki, based just off Kennedy Way, is further proof that West Belfast can be a great place for businesses to locate, but it is vital we build on that. Invest NI need to develop stronger relationships with all stakeholders in the West in order to grow current businesses such as Huhtamaki, who can continue to grow and employ more people.”
A spokesperson for Invest NI said: “Invest NI and the 11 local councils are actively working in partnership to help grow investment and the economy in every part of Northern Ireland. Investment comes in many forms and a set of figures about the number of inward visits is not reflective of the work that is going on.
“For example, nearly 75 per cent of Invest NI’s offers are to companies outside of Belfast, with recent investments in Derry such as the 256 jobs being created by Alchemy Technology Services, the 300 jobs being created by Fintru, the 67 jobs being created by Danske Bank, the 100 jobs being created by Terex Corporation as part of a £12 million investment in a new facility in the city and expansions by Computershare and Axa.”
“Addressing the point that over 80 per cent of inward visits go to Belfast – this should be viewed in context. The vast majority of visit programmes start in Belfast before going to other locations, or in some cases the investor has no time to visit specific locations so are hosted at our HQ in Belfast. What is more relevant is that over the last five years, nearly 40 per cent of investors chose to locate their project outside of Belfast.”