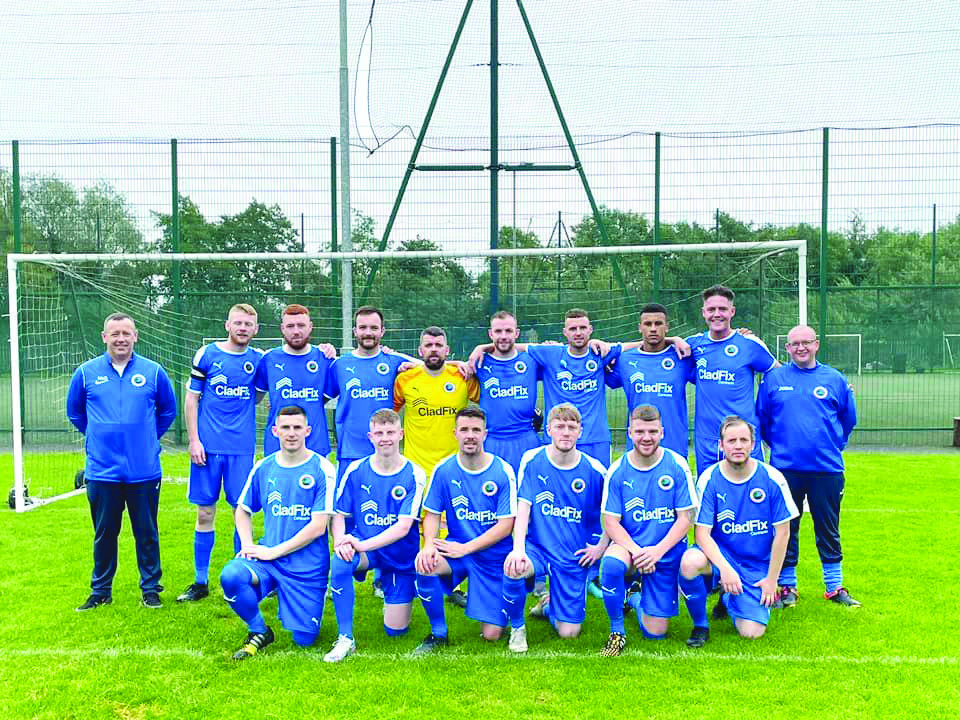 COLIN Valley are just one win away from a possible glamour tie against an Irish Premiership team as they bid qualify for the first round of the Irish Cup at the expense of Bangor on Saturday (Colin Valley Park, 1.30pm).

The eight winners from this weekend’s fourth qualifying round will go into the hat for the last 32 of the competition along with teams from the NIFL Championship and Premiership.

The Poleglass men have one significant hurdle to clear and Premier Intermediate league-leaders Bangor will be strong favourites to progress, but Colin Valley are determined to give Saturday’s cup tie their all.

While McKenna knows the odds are stacked against Colin Valley, he is adamant they won’t be overawed by the occasion.

“Bangor are sitting top of their league with five wins from five and they haven’t conceded too many goals,” said McKenna.

“It is going to be a tough game, but at least we have home advantage and we have to try and make that count.

“It would be massive for us to reach the next round. We are a community club. It is a lot of hard work to keep the club going and we’ve never got this far in the Irish Cup. It would be a really big achievement to get into the next round.”

Colin Valley defeated Glebe Rangers 3-0 in the second round of qualifying after receiving a bye in round one.

They followed that up with an impressive 4-1 win at home against Mid-Ulster Intermediate ‘A’ side Crewe United with Darren Ferguson scoring twice while James Mullan and Stephen Morelli bagged the other goals in a comprehensive victory.

However, they suffered a heart-breaking 5-4 defeat to Linfield Swifts after extra-time at Migley Park in the Intermediate Cup last Saturday and McKenna has urged The Valley to follow in Bangor’s footsteps and respond in a positive manner.

“Bangor had a disappointing result in the Steel and Sons (against Newington), but they to beat Larne Tech in the Intermediate Cup in extra-time last weekend,” stated McKenna.

“They are coming off the back of a good win at the weekend whereas we, unfortunately, lost out to Linfield Swifts in extra-time with the last kick of the game.

“It was an encouraging performance and we’ll look build on that when we take on Bangor.

“At this stage, there are no easy games. We won’t be sitting back – we believe in ourselves and we’ve a young squad.

“We are definitely underdogs, but at home, we don’t fear anyone and we’ll be up for it.”

Newington, meanwhile, are remain standing in all three cup competitions and they’ll seek to continue their Irish Cup journey on Saturday when they welcome Derriaghy CC to Solitude (1.30pm).

They booked their place in the third round of the Intermediate Cup on Saturday as a late brace from substitute Aodhán Gillen gave them a 2-0 win at Richhill.

The North Belfast side will also contest the final of the Steel and Sons Cup on Christmas Day against Linfield Swifts thanks to their dramatic 5-3 win over Bangor in extra-time at Seaview last Tuesday night.

Manager Paul Hamilton made a host of changes for the trip to Co Armagh and, while the performance was more workmanlike than impressive, he was content to progress to the next round.

“The game against Bangor took a lot out of us and we picked up a few niggles,” said Hamilton.

“We brought in a few fresh faces. We have to look after the players.

“The boys who came in done alright and we are into the hat for the next round. That’s the main thing.

“With the conditions, we told the boys it is going to be heavy. Having said that, we didn’t do ourselves justice because we didn’t move the ball quickly. We got them in at half-time and things went our way in the second half.”

Hamilton will look to strengthen his squad for Saturday’s Irish Cup game with the likes of Richard Gowdy, Gary Warwick and Kevin Bradley all expected to return.

“We’ll probably make some more changes and the guys who were rested today (Saturday) will be ready to go on Saturday,” added Hamilton.

“The Irish Cup is a competition we want to get a good run in. We are never going to win it, but we’d like to progress and get one of the big clubs in the next round.

“Richhill didn’t give us an inch and they were right on us from the start. I’d expect next week to be the exact same. We’ve played them (Derriaghy) already in the Steel and Sons Cup and we beat them 2-0. It was a very tight affair and they pushed us all the way.”