Irish schools being ‘set up to fail’ by Dept of Education 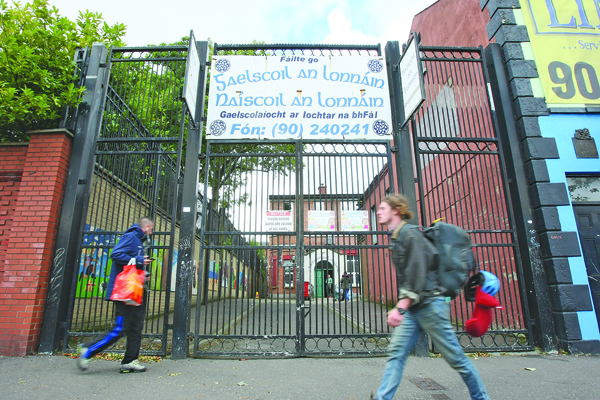 CLAIM: Gaelscoil an Lonnáin on the Falls Road

THE CHIEF EXECUTIVE of the trust fund for Irish-medium education has said that Irish language schools are being “set up to fail” by the Department of Education (DE).

Pilib Ó Ruanaí of Iontabhas na Gaelscolaíochta (InG) has warned that, despite the growth and successes of Irish-medium schools, some are struggling to survive due to a lack of support from the DE.

An InG report on the current state of Irish-medium schools in the six-counties has highlighted a number of DE shortcomings that are inhibiting their growth.

The report suggests that there are a total of eight Major Capital Projects being undertaken at Irish-medium schools including the £10.5 million development of Coláiste Feirste. However, it notes that as many as five of those projects have “no cast iron agreement” that would ensure their completion. Two of the projects are out for tender, while five others are still under procurement meaning that they have yet to be finalized.

The trust fund’s report also states that nine schools are in need of funding typically provided by the DE Minor Capital Works projects, which have an upper spending limit of £250,000.

Five of those schools, including Gaelscoil an Lonnáin on the Falls Road, need relocated due to inadequate facilities and in some cases are confined to temporary accommodation. Many of them lack amenities and are in a state of disrepair, whereas others are simply too small to house the growing numbers of pupils attending Irish-medium schools.

Four schools facing similar problems have been unable to attain DE funding for the development of their current sites, which are unable to fit their needs.

The department has rejected a number of school applications for Minor Capital Works projects on a cost basis, but the report by InG suggests that many have been rejected without a full investigation into their financial viability. A letter from the DE dated 9/8/17 states that it would not be approving any more projects this year due to cuts to the capital budget.

Speaking to Andersonstown News, Mr Ó Ruanaí said that departmental investment must meet the demands of the rapidly growing numbers of children who are being educated through the medium of Irish.

“The Irish-medium sector has been the growing sector in education despite a declining population of school age kids,” he said.

“In recent times there is a greater need for increased capacity and resources to meet the demands of pupils.
“The Department of Education might rightly say that they are spending more money on Irish-medium education than they have done in the past, but it still doesn’t mean that they are doing enough to help the schools catch up.

“They could say they are doing more for Irish-medium sector in comparison to the English-medium sector because our sector is so small, but that doesn’t detract from the fact that we have recently come through an intensive phase of development and growth and are in greater need of capital support and infrastructural investment.”

Mr Ó Ruanaí said that while the DE had previously acted to meet the needs of Irish-medium sector while Sinn Féin MLA John O’Dowd was minister, there was “marked difference in the attitude of the department” when the DUP’s Peter Weir became minister.

“One of Peter Weir’s first moves as minister was to visit Coláiste Feirste, and he had said that he would treat all schools equally. Treating everyone the same is not equality and some of the decisions Peter Weir made were extremely questionable.

“He created delays with Gaelcholáiste Dhoire in Dungiven. He delayed the development of Bunscoil an Traonaigh in Lisnaskea and the relocation of Gaelscoil an Lonnáin to the former St Colmgall’s school site was rejected under his watch too.

“It was easy for Peter Weir to say he is in favour of equality, but that’s not to say the department was meeting the needs of the schools.

“There are serious issues now in terms of funding so we have to understand things in that context, but we would be worried that some of the negative decisions that Peter Weir made in relation to Irish-medium education are still being adhered to now.”

Notably, Mr Ó Ruanaí insisted that some Irish-medium schools would become unsustainable without DE support.
“The aim of any school is to become viable, and the criteria for that include the numbers coming into the school and community confidence in the school.

“I’m concerned that some of our schools are being set up to fail. They just have enough to keep the wolf from the door, but they don’t have the resources or the capacity to become viable and sustainable schools.

“Precedence has shown that whenever an Irish school has been set up in an area, when it has been given proper support, then they have thrived. We would be confident that schools will thrive when they are given the required support.”

“In addition many IM schools have had accommodation upgraded and extended through the £2 million accommodation fund managed in conjunction with Iontaobhas na Gaelscolaíochta to address accommodation issues in developing schools in the sector.

“Additional funding is also being provided to develop high quality bespoke curriculum materials for the sector and also directly to schools to assist with delivery of the curriculum through Irish. This is all being done against a backdrop of severe pressures facing all aspects of the Department of Education’s budget.”

The Andersonstown News contacted the DUP for a comment but they were unable to provide a response.