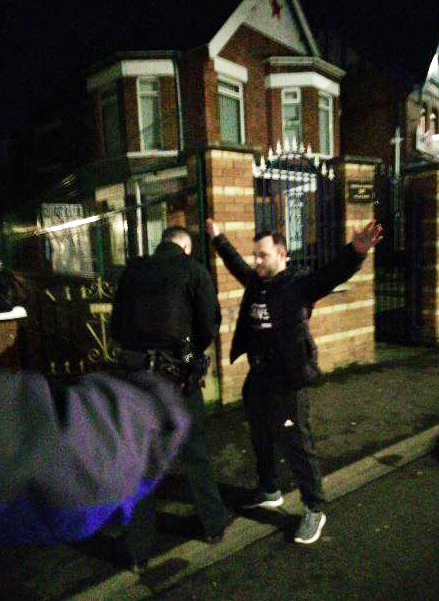 SEARCH: IRSP activist Michael Kelly being searched by the PSNI earlier this month

AN IRSP member who says he is followed by the PSNI daily has accused police of attempting to “intimidate” party activists.
Lower Falls man Michael Kelly was one of a number of IRSP members who were searched by the PSNI as they arrived for a meeting at Costello House earlier this month.
Speaking to the Andersonstown News, Mr Kelly reiterated his parties claims that PSNI are involved in “political policing”, and accused police of harassing party members and their families.
“I have been getting stalked – it’s every day,” he said.
“There are days when it’s worse than others, but there are comrades who get it far worse than myself.
“We have a member in St James’ and the cops have a patrol outside his house every morning when he is going to work and bringing kids to school. When he comes back there will be another jeep sitting there or another car sitting there, sometimes marked sometimes unmarked.
“This week he was going to get his child from a school event and they stopped him. He pleaded his case that he was running late to pick up his kids and the PSNI boot-boys told him he would stay as long as they ‘saw fit’.
“A few weeks ago, I went to pick my son up and I was pulled over and the man said ‘are you in a hurry, Mr Kelly?’ I said I had to pick up my son and told him to get on with whatever he was doing. Again they said ‘you’ll be here as long as we want’. I was there for about ten minutes and I was late to pick up my son.
“It’s not just political activists who experience what this brings, it’s also our families – our kids and our partners. Our partners are being intimidated. Two years ago I was approached by MI5 on the Grosvenor and they followed my partner as she was bringing my daughter to crèche.
“The try to intimidate our family members when we’re not there. It’s clear that the ‘reformed’ police service, as they are called by those who work alongside them, are only accommodating to those who tow the line of the establishment. Those who stand in opposition to the British police force in Ireland are fair game, and that also extends to our families.”
He continued: “It’s no coincidence that this attempt at criminalising the republican socialist movement, it is starting to rise again when our party is starting to grow and we are doing fantastic work in Belfast.
“It will fail today as it has done over the 45 years of the existence of our party. It will continue to be rejected by those on the ground who we work on behalf of.”
The Andersonstown News has contacted the PSNI over the IRSP’s claims and is awaiting a response.