Irvine confident he can rule the flyweight Roost 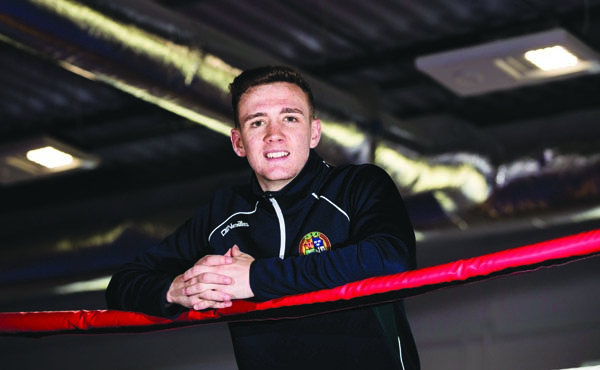 REACHING the medal podium is the bottom line for Brendan Irvine as the West Belfast man prepares for the start of the World Elite Championships in Hamburg this week.

The St Paul’s flyweight came back from the European Championships with bronze after losing out to England’s Niall Farrell at the semi-final stage and anything less than a last four berth would be a disappointment.

This is the 21 year-old’s second World Championships after his very credible performance in Doha back in 2015 when, boxing at light-flyweight, he reached the last eight before running into eventual winner, Joahnys Argilagos of Cuba.

That experience and his subsequent outing in the Rio Olympics plus European bronze has helped establish the Glencolin man as one of Irish amateur boxing’s leading lights and he intends to cement that reputation by picking up a medal in Germany.

“I’m flying at the minute so I can’t wait to get going,” he said.

“I would get started now if I could.

“In Doha, I was beat by the eventual winner in the quarter-final. Obviously now I’m at a different weight so I hope I can come back with a nice medal.

“That would be the main target for me now – to bring a medal home. If I then get into the medal stages, I worry about the colour then.”

Having got bronze at the Europeans in Kharkiv, Ukraine, his next target was to upgrade the colour, but it wasn’t to be against Farrell.

Disappointment was the overriding emotion after that loss, but Irvine believes he has something of a point to prove should their paths cross again, but regardless who he is drawn to face, the world number 10 is determined to ruffle a few feathers and add a World medal to his growing collection.

“I know myself I could have done better (in the European semi-final),” he admits.

“I was sickened with myself a bit, but I just had to pick myself up and keep driving on for the Worlds.

“This is the biggest competition, so I will be going there with good intentions. I will be trying to bring back a medal because it’s one of a few I haven’t got yet in my career.

“I have got the two European medals, so now I have a chance to get one at the Worlds and that’s what I’m aiming for.”

It will not be an easy task with the cream of world boxing travelling to Hamburg with similar ambitions and he acknowledges he faces a tough path to the podium.

“You always need a bit of luck on your side,” he continued.

“You can’t ask for an easy draw, just take what you get and hope for the best. You would be happy enough to fight anyone at this stage because there are no mugs in the World Championships. Everyone has qualified to get there, so it’s going to be as tough as it comes.”

Irvine was a newcomer to senior, elite boxing back in Doha.

Ireland went into that competition having never won gold at the World Championships, but that was rectified by Michael Conlan who blazed a trail and proved his credentials as the world’s best.

The psychological boost of that result has not been lost on the current amateur team with Irvine saying they take confidence from the fact that world champion status is attainable.

“That gives us a lift,” he agreed.

An experienced member of the Irish team given his recent experiences, Irvine could be forgiven for feeling the heat, but relaxed as always, the St Paul’s man is taking it all in his stride and says he is looking forward to performing when the opening bell sounds for the flyweight competition on Saturday.

“No pressure at all. You only put pressure on yourself,” he insists.

“I’m relaxed and confident, not worried about anything. I just go with the flow and enjoy it. That’s the best thing to do.”