‘It was an execution – they came straight in and bang!’ 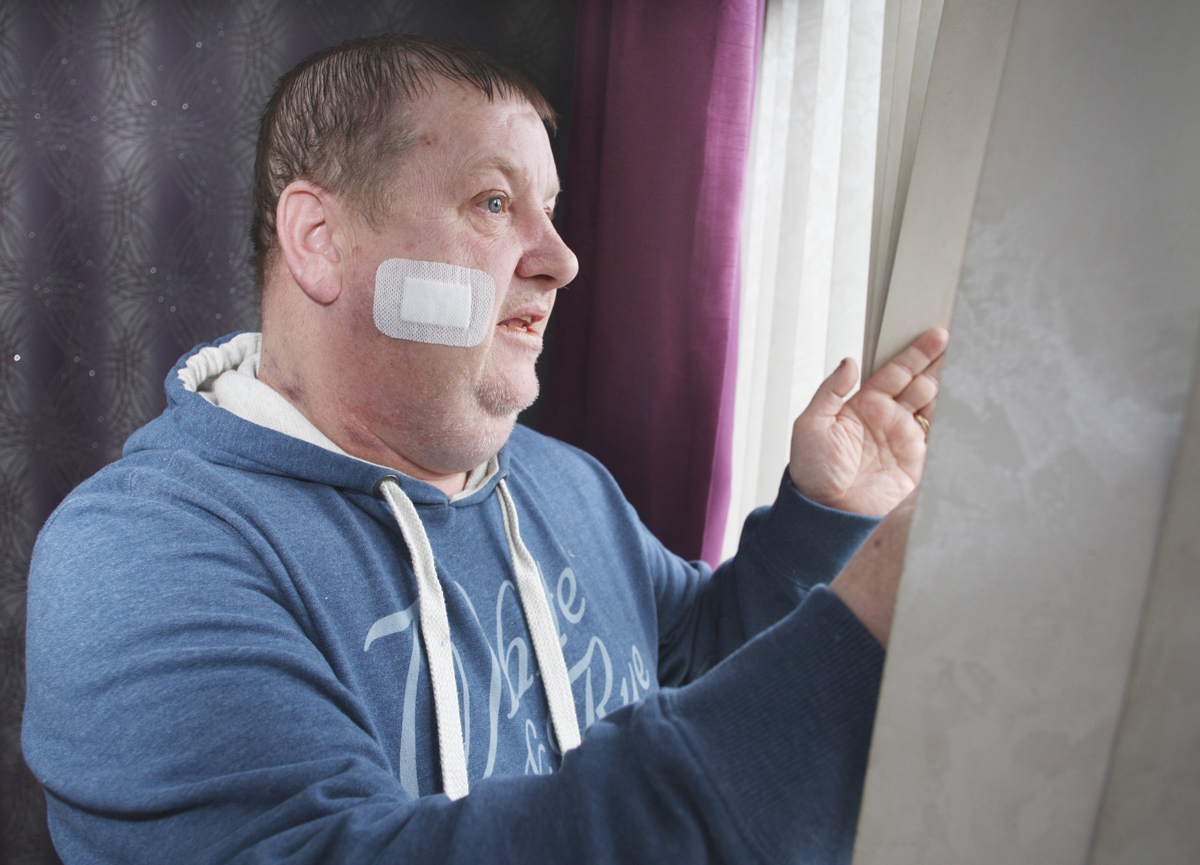 A man shot in the face during a weekend murder attempt in Belfast has spoken out, telling Daily Belfast he been left “devastated” by the attack and accusing those responsible of attempting to blacken his name.
Dan Murray (53) denied being involved in the illegal drugs trade said he signed himself out of hospital early after emergency surgery to remove a bullet from his shoulder so that he could speak to paramilitaries to clear his name.
This is the second time Mr Murray has been shot – he was previously targeted by the Continuity IRA. It’s believed this latest attack was carried out by a criminal gang operating under the wing of the INLA.
On Sunday night, two masked men entered Mr Murray’s St James Mews home off the Antrim Road at around 9pm, minutes after his son of 20 months had been put to bed. They pushed passed his partner Ciara and fired one bullet at his head.
“I didn’t hear anything but Ciara said they shouted ‘Republican Movement!’,” he said. “They had a 9-mill gun. It was an execution – they came straight in and bang! They didn’t hesitate, they didn’t give any warnings. I turned around and the bullet went into my face. It hit my jaw, hit the bone and went right down and [into] my shoulder. I staggered when they shot me, I thought they had shot me in the throat at first and I could feel most of the pain in my shoulder. There was a lot of blood.”
Mr Murray, a hot food delivery driver on the Falls Road for 22 years, denied that the attack was drug-related and rubbished media reports that there had been an ongoing threat against his life.
“I went to Óglaigh na hÉireann, I went to the Real IRA, I went to the Irps (IRSP) and I have a meeting with another group this week and none of them have claimed an attack on me or have a problem with me,” he added. “I have no idea why they were here and my name is blackened again.”
Mr Murray spoke of the previous attempt on his life which he said was an extortion attempt.
“I was shot in the past. It was an extortion attempt, I wouldn’t give them anything and they ambushed me when I called to a house in Beechmount. I went and met the groups then too. I said then what I am saying now: bring one person in front of me that says I sold them cocaine, heroin or any other drug and they won’t be able to. Whoever carried this out can’t justify it.”
Mr Murray and his partner Ciara Austin say they’ve been overwhelmed by the support shown to them in the wake of the attempted murder.
“Not just friends, family and neighbours – we have had messages of support and offers to help in anyway from the wider New Lodge community,” said Ciara. “It’s sad to think that something like this has to happen before you realise what people think of you but we really appreciate it.
“We’re just ordinary people. If he was a drug dealer he’d be the poorest drug dealer around and we just want an explanation for this.”
Detective Constable Gareth Hussey said: “Anyone with any information about this incident is asked to contact CID at Musgrave Police Station on the non-emergency number 101. Information can also be given anonymously via Crimestoppers on 0800 555 111.”