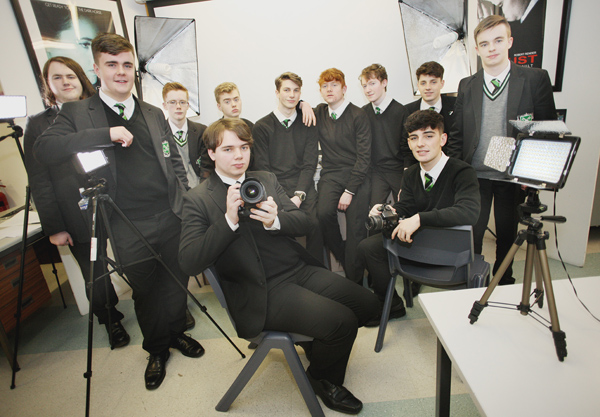 In 20 years time there’s a good chance the Irish film industry north and south will be dominated by St Malachy’s College pupils.

That’s because the school has been one of the pioneers in taking on the Moving Image modules as part of their art course and the boys have been so successful that moves are now under way to develop an official link with the Irish film school at the Irish Institute of Art and Design in Dún Laoghaire, County Dublin.

Under the tutelage of art teacher Joe Gallagher, St Malachy’s is making its name nationally and Joe says he believes the best is yet to come.

“Something that we do in here is that we may not the best equipped or resourced college but we produce the best work and that’s because we allow the students to explore,” he said.

Fostering a love of film is as important as learning technical skills and throughout their time in the course the boys are taught to use their creativity.

Rory Davidson, 17, says he is now looking at following a career in film.

“I was always really interested in films and picked it at GCSE because it sounded quite interesting.

“Feature films were my main interest at the start and then when I started learning more about the process I gravitated to short films. I didn’t even know short films existed until I did this course.”

The hard work that has to go into a production was a shock.

“It’s a much longer process, definitely. At the start I thought I’d just pick up the camera and go but I soon realised how much preparation was going to have to go into it.

“I’m working on a short film at the minute about a priest who is told something in confession and the film will explore the conflict he has about whether he should do something about it or not. Hopefully it will be as good as I have it in my head.”

Rory was among a handful of students to complete a residential course with the British Film Industry (BFI) which he says he found “really really intensive”. Joe says that this is a way to further enhance the boys’ skills – and that can be seen in Rory’s work. “Rory came forward with his idea about the priest and the breaking of the confessional and that’s a wonderfully mature subject. I said to him just to make sure you are not being clichéd because you can get caught up in obvious things. I told him to focus more on the subtleties and the dilemmas.

“The stuff these fellas are doing is much much more sophisticated.

“It’s subtle and that is because it comes from the brain and the heart, it doesn’t come from having the best film suite or editing suite, or even the content.

“We’re not playing the poor mouth, we are actually okay, but there’s some schools are kitted out almost to a professional standard.

“A new build has been confirmed for here and when that happens will we have studio space because we don’t have a studio at the minute. Other schools would have maybe two Apple Mac suites for video editing and a studio space and more cameras and lights but we have enough.

“Having the best equipment doesn’t make you the best filmmaker or photographer. Good photographs and films some from creative individuals.”

Moving image is taught at GCSE and A-Level and also as an ‘enrichment’ course after school.

“I was taking photos randomly and that got me into photography and I started learning more about famous photographers like Don McCullin and Tim Hetherington through documentaries and from there I got interested in film,” he said. “When I saw the school offered these subjects I thought I may as well pick it up.”

Aaron hopes to pursue photography as a career but Joe says other boys are learning skills that will help them in other spheres.

Jake Owens says doing the course has opened his eyes.

“I want to do a computer science course and become an entrepreneur,” he said. “My family are very business minded and that’s how I was brought up, but this has allowed me to be more creative and look at things differently – not everything is black and white.”

The hands-on approach of the course is what sets them apart, adds Joe.

“Every year we do buy new equipment because our equipment does get worn out but that’s the way it should be.

“Equipment shouldn’t be pristine because it’s sitting there not being used. Our cameras are battered and scraped from use and that’s the way it should be.”