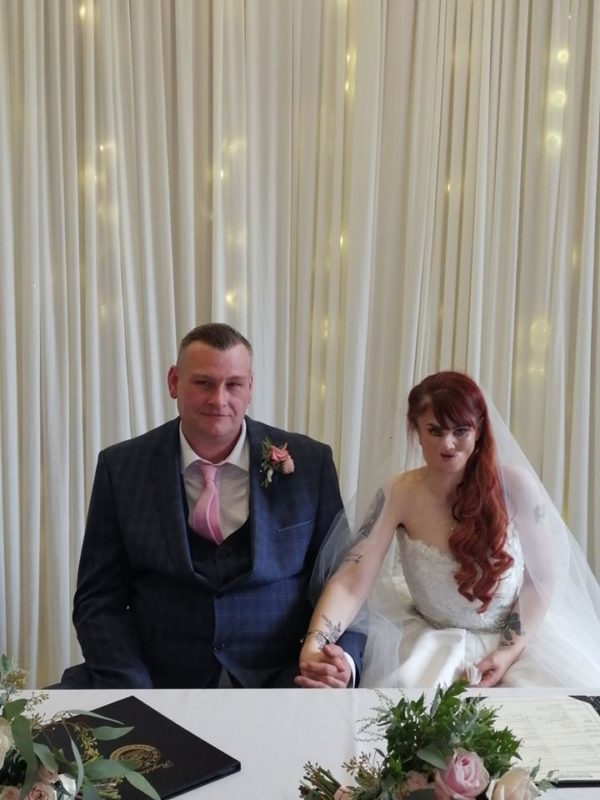 BIG DAY: Janine and Matthew tied the knot back in October

WELL-known local woman Janine Howard will feature in tonight's edition of the popular BBCNI documentary series, True North.
‘Saving Face’ follows the story of 35-year-old Janine and her preparations for her marriage to fiancé Matthew Light in October.
Janine was just two years old when she was diagnosed with leukaemia. During treatment for the condition, she developed the rare life threatening condition necrotizing fasciitis, also known as the flesh eating disease, resulting in surgeons removing large parts of the soft tissue in her face.
Despite the trauma, Janine survived but her story made local headlines back in February 2018 when she approached the North Belfast News for help after suffering abuse on the street and online because of the way she looks.
In a heartbreaking interview, she revealed that she’d had to start wearing earphones when she left the house to block out the abuse and insults she was receiving from young people. But the North Belfast community rallied round and she was inundated with cards and gifts, restoring her faith in human nature.
In the programme, Janine talks about her life, the surgical treatments she has received and the difficulties she has faced her entire adult life, including the cruel taunts she receives because of how she looks.
As Janine and her partner Matthew plan their wedding, they are met with generosity from local businesses who want to help. But as the day approaches Janine has one wish – to get her smile back. She is hoping doctors may be able to reverse some of the effects of her facial scarring through reconstructive surgery and hopefully restore her smile for her wedding photographs.
True North: Saving Face is made by Triplevision Productions for BBC Northern Ireland. It will be broadcast on Monday, January 27 on BBC One Northern Ireland at 10.35pm and available on BBC iPlayer.