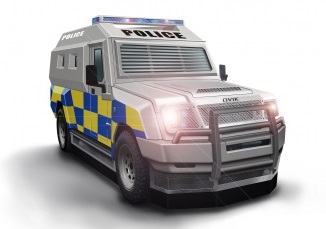 SQUINTER thought at first glance this is a Range Rover Evoque, the fancy 4X4 so beloved of second-tier football players, small company directors and mid-level drug-dealers. But he was wrong. In fact, it probably won’t be long before you see one of these at a Camp Twaddell near you.

This is the new generation of armoured public order vehicle about to come on stream and the company that makes them, OVIK, has announced on its website that it has recently made its first sales of the new-model Pangolin to UK police. And because you don’t see many of these things in Chipping Norton, Aberystwyth or Kircaldy, Squinter’s assuming that it’s the Trevors who will be handed the keys.

Now when Squinter says OVIK makes them, that’s not entirely accurate. The precise details of their derivation must not take up too much of our time, so let’s just say that OVIK buys your basic Land Rover Defender, strips it down and turns it into a mobile blast-proof sangar. The durability of the vehicle is staggering. The Pangolin can withstand a direct hit from an RPG7; it is impervious to armour-piercing bullets; and its roof can hold up to three morbidly obese loyalist bandsmen before it collapses.