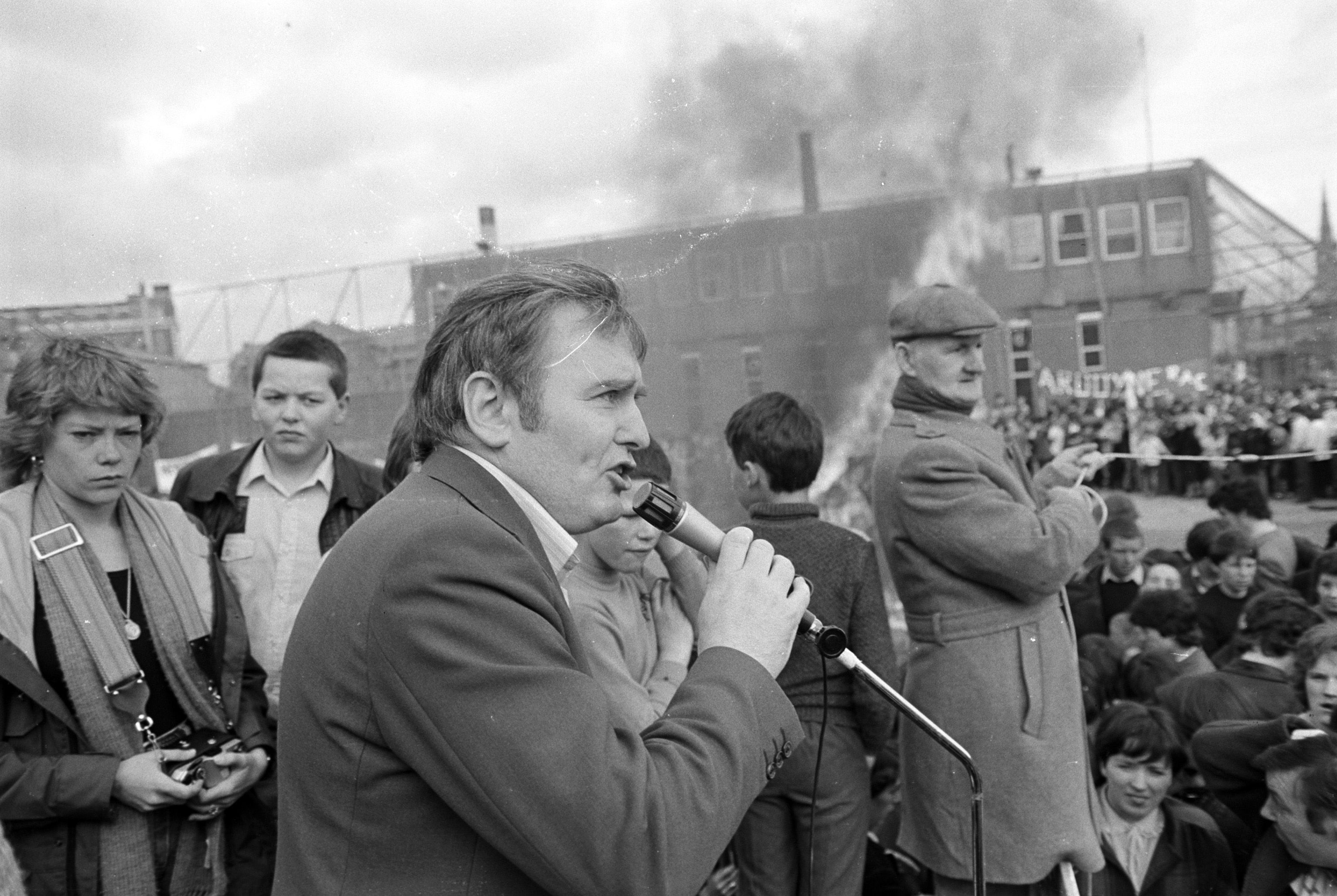 DEMONSTRATION: Jim Daly at a census burning protest in Belfast, 1981

TRIBUTES have been paid to a former Queen’s University professor and leading political campaigner James ‘Jim’ Daly, who passed away on Monday.

Jim was the husband of IRSP Chairperson and INLA Volunteer, Miriam Daly, who was murdered by a state-backed UDA death squad at their Andersonstown home in 1980.

Brought up in an Irish family in Cheshire, England, Jim moved to South Armagh when his parents died.

He met his wife Miriam, who was from Swords in Dublin, through a mutual academic acquaintance.

The pair moved to the Stranmillis area of Belfast in 1968 when Jim was appointed as a lecturer at Queen’s University, where Miriam took up a lectureship shortly afterwards.

Both Jim and Miriam became involved in the Civil Rights movement and became affiliated with People’s Democracy, the radical left section of the movement. They were both members of Sinn Féin and were regular contributors to the Republican News, before later joining the IRSP.

In 1974, they were forced from their Stranmillis home and moved to Andersonstown after being informed that they were on a loyalist death list.

Jim and Miriam later became involved in the National H-Block Armagh campaign, whose committee became a target for the British state and its proxies.

Miriam was shot dead by the UDA at her home in Andersonstown on 26 June 1980, aged 51. Fellow H-Block campaigner John Turnley was shot dead that same month. Campaign spokesperson, Bernadette Devlin, had survived a UDA murder attempt in January that year.

Miriam’s murder also came amidst a targeted campaign of assassinations against the Republican Socialist Movement. In another case of collusion, INLA members Ronnie Bunting and Noel Lyttle were murdered in Andersonstown in October 1980 in an attack claimed by the UDA.

Speaking to the Andersonstown News in 2001, Jim said of his wife’s murder: “She came very much to the notice of agencies that were poking their noses in here, for sure. That’s why she was targeted.”

“She never stopped,” he continued.

“It was amazing how much dedication she had. She was always upbeat and confident and optimistic. If there is an opposite to demoralise, she moralised people.”

Despite suffering personal tragedy and the threat of loyalist and state violence, Jim continued his work on behalf of the prisoners in the H-Blocks and Armagh Gaol.

Jim was at the bedside of INLA Hunger Striker Patsy O’Hara when he died on 21 May 1981 and also chaired proceedings during his funeral in Derry.

Jim Daly was also a respected academic of some 40 years, lecturing in Philosophy at Queen’s University for over 30 years. He is the author of ‘Marx: Justice and Dialectic’ and ‘Deals and Ideals’.

His last public political engagement is thought to have been the 2016 unveiling of a mural to his wife Miriam in Beechmount, which was erected by the IRSP.

Paying tribute, the IRSP said they are "deeply saddened" by Jim's death.

“Jim was a dedicated republican socialist activist who held senior roles within the IRSP.

“He was held in continuously high esteem throughout republican and socialist circles for his political intellectual abilities.

“Jim was the beloved husband of former IRSP chairperson Miriam Daly, who was tragically assassinated by a British death squad in 1980.

“Our thoughts are with the entire Daly family at this time.”

Jim and Miriam’s friend, Jim Gibney, said: “When I think of Jim, I think of Miriam and their children, Donal and Marie and their loving family home on the Andersonstown Road.

“I practically lived in the house for most of the late 1970s.

“Jim and Miriam were an inseparable couple. Where one was the other wasn’t too far away. They were an intellectual powerhouse.

"Their home was a political ‘drop-in’ centre for republicans, without an ‘open all hours’ sign above the door but it was an open house.

“I first met Jim with Miriam in 1973, when with other Queen’s University lecturers they came into Long Kesh to visit the internees and speak to us.

“Miriam was an early political mentor of mine and Jim was never too far away with his own political views.

"Miriam’s killing by loyalists, acting for the British state, took place in their home. It was a devastating blow to Jim and Donal and Marie.

"I recall asking Jim at the time about selling their home but he said there was only one bad memory, Miriam’s killing, the rest were great memories, and he would not let the killers deprive him of those memories by selling the house.

“Jim’s attitude to staying in the house, indeed continuing his political activism, after such a shocking and awful killing sums up his inner strength which he drew off to raise Marie and Donal, without Miriam’s actual presence but with her spiritual presence in their home.

“Jim’s manner was gentle and persuasive and behind the gentleness was a sharp, keen and knowledgeable mind which he used in the struggle of a united Ireland.

“He loved the Irish language and I used to marvel at the way he weaved Irish and German words together, he also spoke German, as he tried to master Irish grammar when we attended Cluan Ard.

“Jim was kind, generous and friendly and always had time for a laugh and a chat no matter how long it was since the last time he saw you.

"He will be greatly missed by Donal and Marie, the grandchildren and his friends.”

Jim's remains will leave his home, 83 Andersonstown Road on Saturday at 12.30pm to arrive at St Agnes Church for 1.00pm Requiem Mass followed by burial in Milltown Cemetery.

He is survived by his children Donal and Marie.