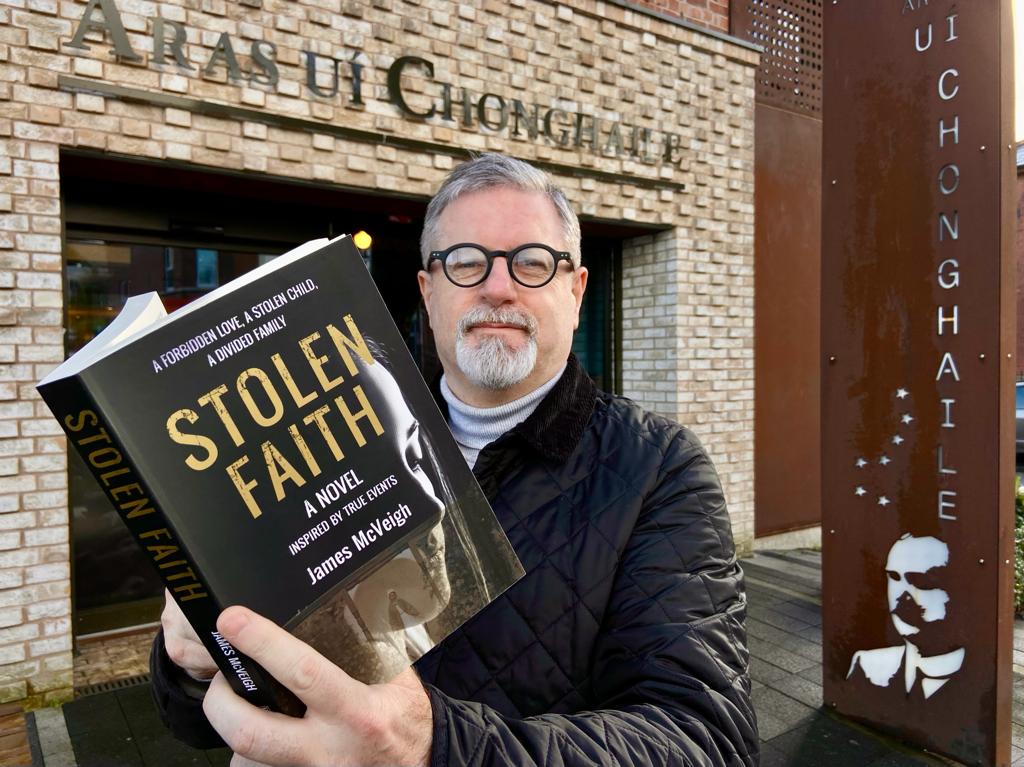 BOOK LAUNCH: Stolen Faith by Jim McVeigh will be launched at Áras Uí Chonghaile on March 3 at 7pm

Stolen Faith tells the story of a girl from the Falls Road who is forced to give birth in Tuam mother and baby home following a brief affair with an American GI and it goes on to the broader sweep of the global implications of human trafficking conducted by the Catholic Church.

Although the book not being released until the end of February, there has already been talk of turning the story into a movie with interest from a number of studios including the makers of the hit History Channel series, Vikings, and the Mel Gibson classic Braveheart.

“I have written a couple of history books, one was about Tom Williams, one was about Joe McKelvey and the executions in 1922," Jim tells me. "I had a little bit of experience in approaching publishers and most people who write will be rejected by multiple publishers before getting commissioned.

“A friend of mine sent the manuscript to O’Brien press. Michael O’Brien got my number and rang me personally to tell me that he loved it and that it had him in tears. That never happens, usually it is a case of authors chasing publishers.

“I had given copies to a few people in the literary and artistic world and almost all of them have come back and said that it is very moving.

“When you write a novel you just don’t know what the reception is going to be like. I gave it to people who I knew would be critical and I got a strong, positive reaction.”

Jim said that he is very aware of the brutality meted out to women at the hands of the Catholic Church and as such, he reached out to a few women whom he knew were victims to gauge whether he had struck the right tone.

“I thought a great deal about how I would deal with the treatment of the women and I was conscious that there were lots of victims. I sent them the manuscript at different points and told them that I was taking a no-holds-barred approach to describing the treatment of the women and children. I asked if they felt that would be insensitive and they came back and said no, absolutely not to pull any punches as they wanted people to be faced with the reality of what went on at the hands of the Church.

“This is probably the biggest scandal of the last century in Ireland. When you look North and South there were around 100,000 women effectively imprisoned in these institutions."

And Jim has his own story about the location of the infamous story.

I was aware of the breaking scandal but I also had a personal connection to Tuam.

“After 1969, we didn’t live too far from Bombay Street. I ended up on a Catholic Church-organised trip to Tuam. I hardly remember much about it but I remember arriving in an abandoned Church-run building.

“I am not sure whether we stayed in the convent or the home and I have tried to find records of the trip through the parish but there doesn’t appear to be any official record.

“When I got out of jail, I was in Galway and asked a friend to take me to Tuam. He took me to this monument from the Civil War. Prior to being a home, it was a workhouse and during the Civil War, three IRA volunteers were executed within the grounds of the home.

“When the place was knocked down, some people had the foresight to keep the part of the wall where they were executed and the bullet strike marks are still visible. When we were there I noticed a little shrine behind a gate and asked my friend what it was.

“He told me that there had been rumours that kids from the home had been buried there. That was in 2001. When the story then broke in 2012, everything came together.”

Jim added that around five years ago he stumbled across a photograph in a book, taken by American war photographer James Vanderbilt. He had passed through Belfast on his way to Normandy and took photographs on the Falls Road.

“I was sitting in the house one day and decided that I would have a flick through the book. The first page that I came to had a photo of my mother when she was 17, sitting outside my grandfather’s shop on the Falls Road. That is how the story begins.”

The story of Stolen Faith also incorporates the scandal surrounding clerical sex abuse in Boston, which provides a platform for an international interest in the novel.

“The more I researched, these kids who were adopted or trafficked in  many cases ended up in horrible situations in Ireland and abroad. A significant number were abused both sexually and physically.

“I had read My Name is Brigid and became aware that not only were the adoptions an injustice, but at times these kids were put into awful situations.

“I consciously wanted to make it a global story and it is quoted in the book that a HSE report found that a senior social worker came across a huge number of records of adoptions to the United States.

“This would dwarf any other issue involving the Church. People understand that children were effectively stolen from their mothers but the scale of it hasn’t been properly realised as the focus has been on the homes.

“This was done on an industrial scale and we had situations where the church was chartering whole planes and flying children to America. Maybe only a quarter of them were legal, the rest had no passports and were perhaps flying under fake names and identities.”

Jim said that he hopes that people are moved by the book and that it motivates people to question the actions of the Church when it comes to these injustices.

“This is only the second novel ever about this subject matter. I hope it resonates with the victims, survivors and that it helps bring attention to the issue and makes people angry because I don’t think the full story of what went on in these homes has yet come to life.

“The remains at Tuam are still lying in the septic tank. There has been no police investigation. We don’t know who put the bodies there, who knew it was going on or how many bodies are actually there. I hope this book motivates people to actually find the answers to these questions.”

Stolen Faith by Jim McVeigh is published by Brandon, an imprint of the O’Brien Press. It will be released on February 28 and will be available in all good bookshops.