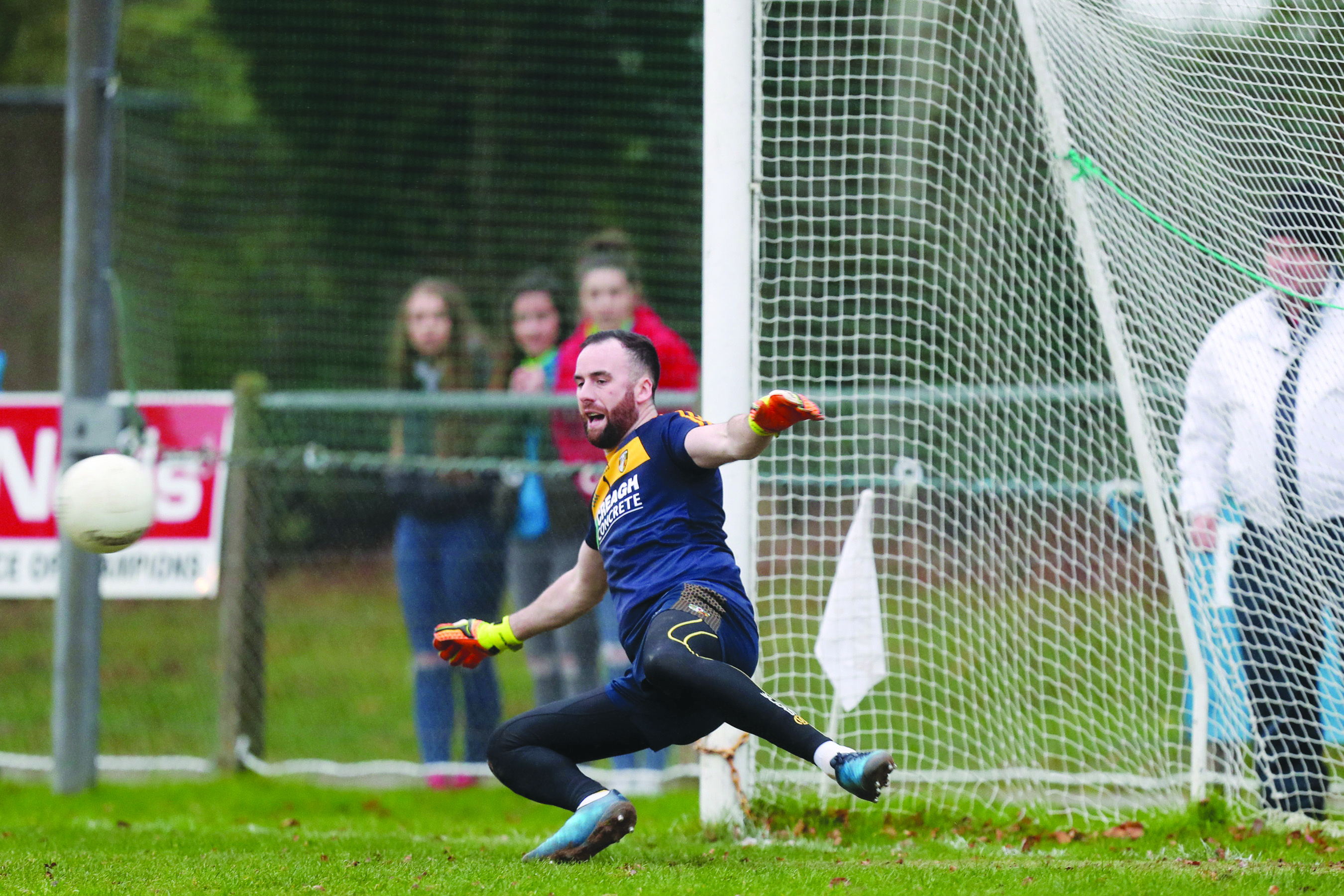 Ex-Antrim goalkeeper links-up with Grange in Armagh, but still has plans to play for St Gall’s this season

CHRIS Kerr says he is excited to take on his first senior coaching role after linking up with the Grange footballers for the forthcoming season.

The former Antrim ’keeper will work with the Armagh club as a coach for their outfield players as well as their goalkeepers while he still hopes to return to action for St Gall’s later in the season.

Kerr missed the vast majority of the 2019 club season with an ACL injury with former Fermanagh goalkeeper Ronan Gallagher returning to St Gall’s.

Last year, Kerr returned to action in a league game and featured in the Championship win at Gort na Móna, but missed the subsequent home defeat to Naomh Éanna with a minor groin strain.

However, his season would end prematurely as slip in training led to a rupture of the same anterior cruciate ligament.

In the wake of his second major knee injury in as many seasons, Kerr questioned if he’d have the appetite for yet more rehab.

Yet, almost eight months later, Kerr is itching to get back on to the pitch, both in a playing and a coaching capacity.

“Everyone is having cabin fever at the minute and all players are mad to get back at it,” said Kerr.

“Everyone is doing individual workouts and keeping themselves ticking over, doing runs etc. There is only so much of that you can do without being around your teammates.

“When I initially got the second injury, I was sickened that it happened and, being reactive, I didn’t know if I could do the rehab again. Now I have it done, I feel good.

“I obviously still want to play for St Gall’s and I still feel I’m good enough to play and I still have that itch to play.

“I want to play for St Gall’s, first and foremost, and hopefully I can help the Grange out along the way.”

With the GAA set to confirm their roadmap for the 2021 season tomorrow, it is anticipated that the inter-county season will resume next month before a club campaign later this summer and the extra few months should allow Kerr to return to full fitness.

“I think I was one of the few players hoping county went before club this year and last,” added Kerr.

“I always heard of other people having the injury, the likes of my own club-mate Terry O’Neill, but you don’t appreciate the effort that goes into the rehab until you’ve been through it.

“When I was out the first time, I actually only missed seven games in total between league and Championship -that’s just the way the seasons panned out.

“I’m back running and I’m able to kick footballs again, so I don’t think I’m that far away.”

The St Gall’s ace is now living in the Cathedral City and plans to juggle his new coaching commitments with his return to action with the Milltown Row club later this year.

The Grange have been one of the most improved club sides in Armagh since winning the Junior title back in 2010 at the expense of local rivals Tullysaran.

Backboned by a host of senior and underage county players, they secured the Intermediate title in 2019 and Kerr believes they ready to establish themselves in senior level.

“I moved down to Armagh around this time last year and, between lockdowns, a lot of players were training sporadically at the College Fields,” said Kerr.

“I was chatting to one of the Grange players, Brendan Rafferty, and he was telling me that they were on the lookout for coaches.

“Peter Nugent (Grange manager) gave me a call and we took it from there.

“They are a good club and the club scene in Armagh is a lot like Antrim- you have a lot of teams who are there or thereabouts who fancy themselves.

“Grange have all the ability in the world, it is just about making the step up to the next level.

“If you look at their team on paper, you’ve the McKenna (Cathal and Miceal), Ethan Rafferty, Ben Toal, Diarmuid Rafferty – all quality players. Páraig Rafferty is another class act and they’ve a load of great young players coming through.

“They have all the attributes to do well, but it is about taking that next step from playing Intermediate to Senior football.”

Kerr also had a word of warning for those in Antrim who feel St Gall’s are a spent force following their quarter-final exit to Portglenone last summer.

“It is not like previous years when you have one dominant team then a big gap to the chasing pack – now you’ve so many games you’ve games going to replays and extra-time,” added Kerr.

“So many teams are at a similar level. I’d say you have five or six teams who will fancy their chances of being Antrim champions and we are no different.

“We’ll always feel we have a chance of winning, but it is now seven years since our last title and that’s seven years too long for St Gall’s.

“If we have everyone fit and ready to go, I still believe we are as good as anyone.”