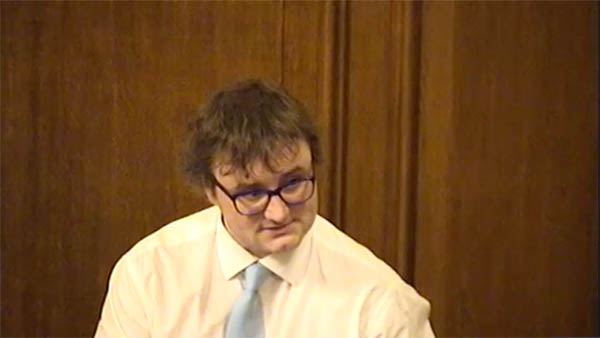 THE big screen at Belfast City Hall, street disorder and hire charges for Council pitches were among some of the issues discussed at Belfast City Council’s monthly meeting on Monday night, writes Conor McParland in the chamber.

Things got off to a fiery start with the issue of declaring an interest and leaving the Chamber during discussions causing some tension between rival parties, with the SDLP’s Tim Attwood calling for more clarity on the rules for members.

It was the big screen in the grounds of the City Hall which brought the first show of hands of the night with the UUP’s Jim Rodgers, a lively figure throughout the night, proposing the screen is put into storage immediately and sold off. High Sheriff Rodgers claimed the facility costs up to £27,000 a year, but his amendment was defeated.

As decided in the Strategic Policy and Resources Committee earlier this month, the screen will remain in situ until such a time as it is requested or acquired by a third party. It will disappear after 2019.

Unprecedented waiting lists for hospitals was on the agenda for the UUP’s Sonia Copeland. She pointed out that 392,000 people – or one in five of the population – are currently on a waiting list and declared the problem at its worst in 15 years.

Members echoed her concerns and agreed that an all-party delegation would be sent to meet Health Minister Michelle O’Neill as a matter of urgency.

Street disorder in South Belfast was then raised by Alliance Cllr Emmet McDonough-Brown. He called for the Council to take responsibility for the issue. The installation of CCTV will be referred to the relevant committee later this month.

People Before Profit’s Matt Collins then raised his concerns over excessive hire charges for Council pitches. It was noted that some users have been faced with a prince increase of up to 25 per cent for grass, 3G and 4G pitches. Cllr Collins said the charges were “simply unattainable” for many local teams and a re-examination of City Hall’s pitch pricing policy was referred to committee.

Proceedings closed for the evening with unanimous support for Alliance’s David Armitage’s motion on mental health. The Alliance representative movingly and honestly revealed his own personal mental health journey to fellow members, with the DUP’s Guy Spence congratulating his fellow member on his bravery and courage.

Perhaps it was fitting that the night ended on agreement on such an important issue, with the Council agreeing to provide appropriate training for staff and to write to the Health Minister calling for the appointment of a champion for the mentally ill.