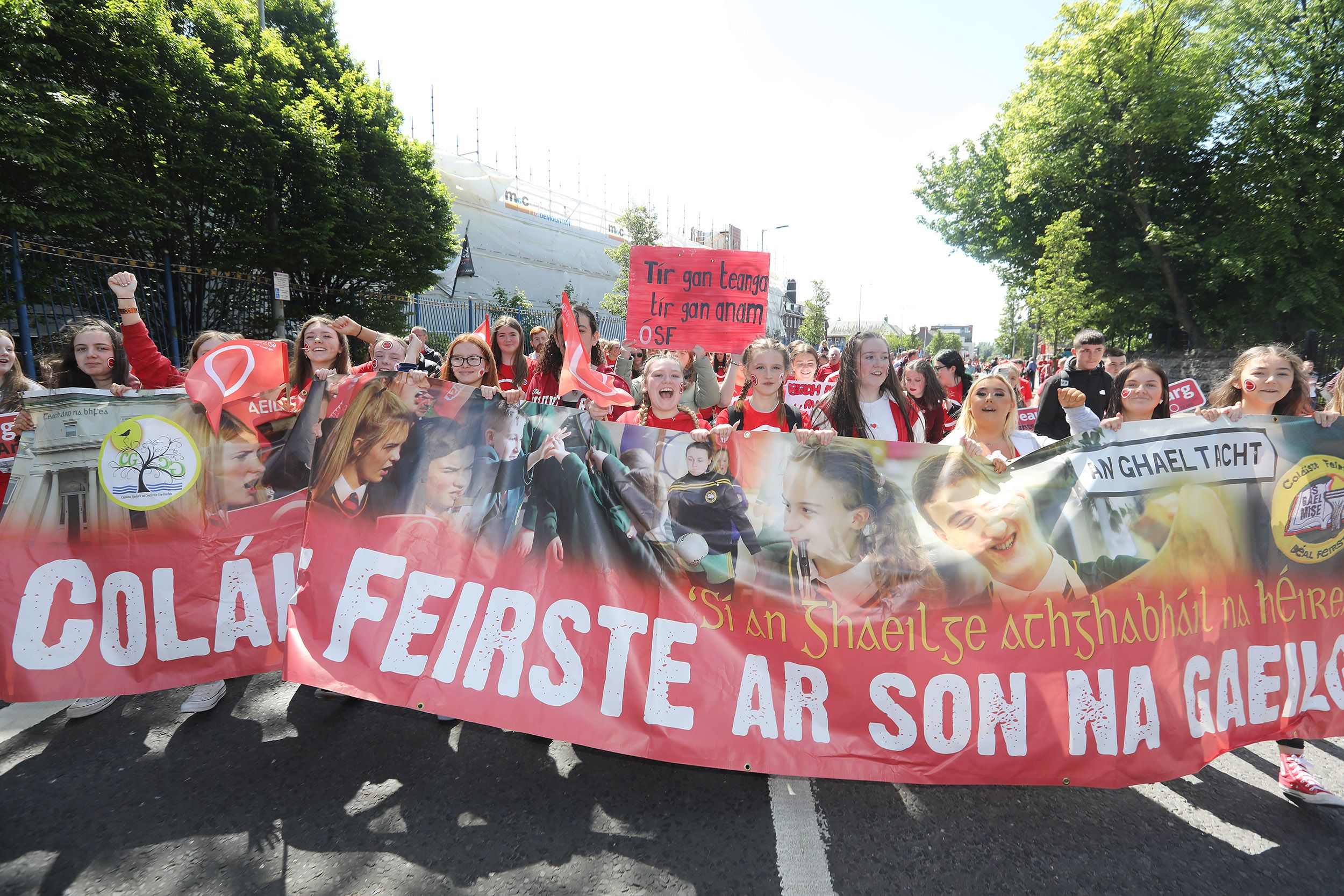 ACHT ANOIS: Up to 17,000 marched for Irish language rights on Saturday

SATURDAY'S Lá Dearg march has been hailed as the biggest demonstration for Irish language rights in "a generation".

An estimated 17,000 took to the streets of Belfast to call for the immediate implementation of Irish language legislation.

Irish speaking families, community groups, GAA teams, sports clubs and others joined together in a colourful and vibrant march from Cultúrlann McAdam Ó Fiaich to Belfast City Hall, where speakers and singers called for equality and recognition for the Irish language.

Speaking from the stage, Conchúr Ó Muadaigh, spokesperson for An Dream Dearg, said: “We have been absolutely blown away by the incredible support for Irish language rights today both from within the Irish speaking community and the wider support from broad sections of society here. We knew it was going to be big, but this is undoubtedly the biggest Irish language demonstration of a generation.

"An Dream Dearg has built a grassroots movement that has pushed the Irish language from the margins to the very centre of political and civic discourse both here and internationally, a movement that has spoken truth to power and ensured our community would no longer be treated as second class citizens, marginalised or excluded. Those days are gone for good. Our message is clear and unequivocal. It is time for the British Government, the DUP and others with power and influence to end their decades-long veto and obstruction of Irish language rights.

"The Irish Language Act is long, long overdue. Our community cannot and must not be made to wait any longer for the same language rights enjoyed by citizens across these islands. We demand better. We demand an inclusive and tolerant society, a society where our rights are enshrined in law to protect all those who wish to live their lives through Irish. Now is our time. Acht Anois.”

Clíondhna Ní Mhianáin from Carntogher in County Derry was only 11 when she took part in her first Lá Dearg in 2014, demanding a new secondary school in south Derry. In 2017 she marched again and on Saturday she took time out from her A-Level preparations to address the crowd in Belfast.

Clíodhna said: “As a young Irish speaker I have seen first-hand the transformative impact our community can have when we organise and challenge this state on their dismal record on language rights. They told us in 2014 we couldn’t have a secondary school in Derry so we took to the streets. Our public campaign succeeded and in 2015 we opened Gaelcholáiste Dhoire with 13 students. Now almost 300 students have come through our doors, and as a member of the first year group, I am now finishing my journey.

"None of that would have been possible without a community campaign for equality and rights, without Irish speakers demanding better, demanding an Irish Language Act. Now it’s time for our generation to play our part, to organise and demand a society that not only recognises us, but celebrates our native language as a central part of our diverse society and provides space for us to flourish. We now have a community of young, confident and educated Irish speakers standing up to protect and promote an Ghaeilge, and we won’t take ‘no’ for an answer.”

Special guest of honour on the day was five-year old Dáithí Mac Gabhann, who has been raised through Irish. Dáithí recently changed the law in support of organ donation and has been consistently involved in the campaign for an Irish Language Act.