Labour MP to push for equal marriage in the north 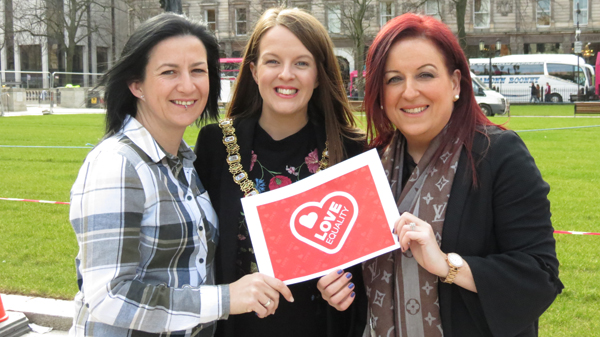 A LABOUR MP will introduce a bill at Westminster later today calling for same-sex marriage to be legalised in the north.

Conor McGinn, who was born in County Armagh, is the current MP for St Helen’s North in Merseyside.

A similar private members’ bill was brought before the House of Lords on Tuesday and passed its first stage.

The north remains the only part of the UK and Ireland where same-sex marriage is still illegal.

Lord Mayor Nuala McAllister, who met with representatives of ‘Love Equality’ this week, said no-one in such a large section of society should be discriminated against.

“People often say that we aren’t a liberal society, but I don’t believe that is true. Over the past year I’ve been amazed at the open, welcoming and inclusive Belfast we have been building – a global Belfast ready to showcase its potential to the world. This is the Northern Ireland we should be promoting, not one who actively discriminates against a large section of society.”

Green Party member and LGBTQ activist Malachai O’Hara said the idea that equal marriage for the north could be delivered through Westminster was “bittersweet”.

“This legislation is long awaited and a very welcome step forward, but it doesn’t change the fact that this should have been delivered by our own Assembly,” he said.

“The Executive parties have never passed any legislation to progress sexual orientation or gender identity equality and LGBTQ campaigners are left in a position where they have been abandoned by those who have a duty to legislate for them.

“Relying on Westminster to once again progress LGBTQ legislation is a return to the status quo.”