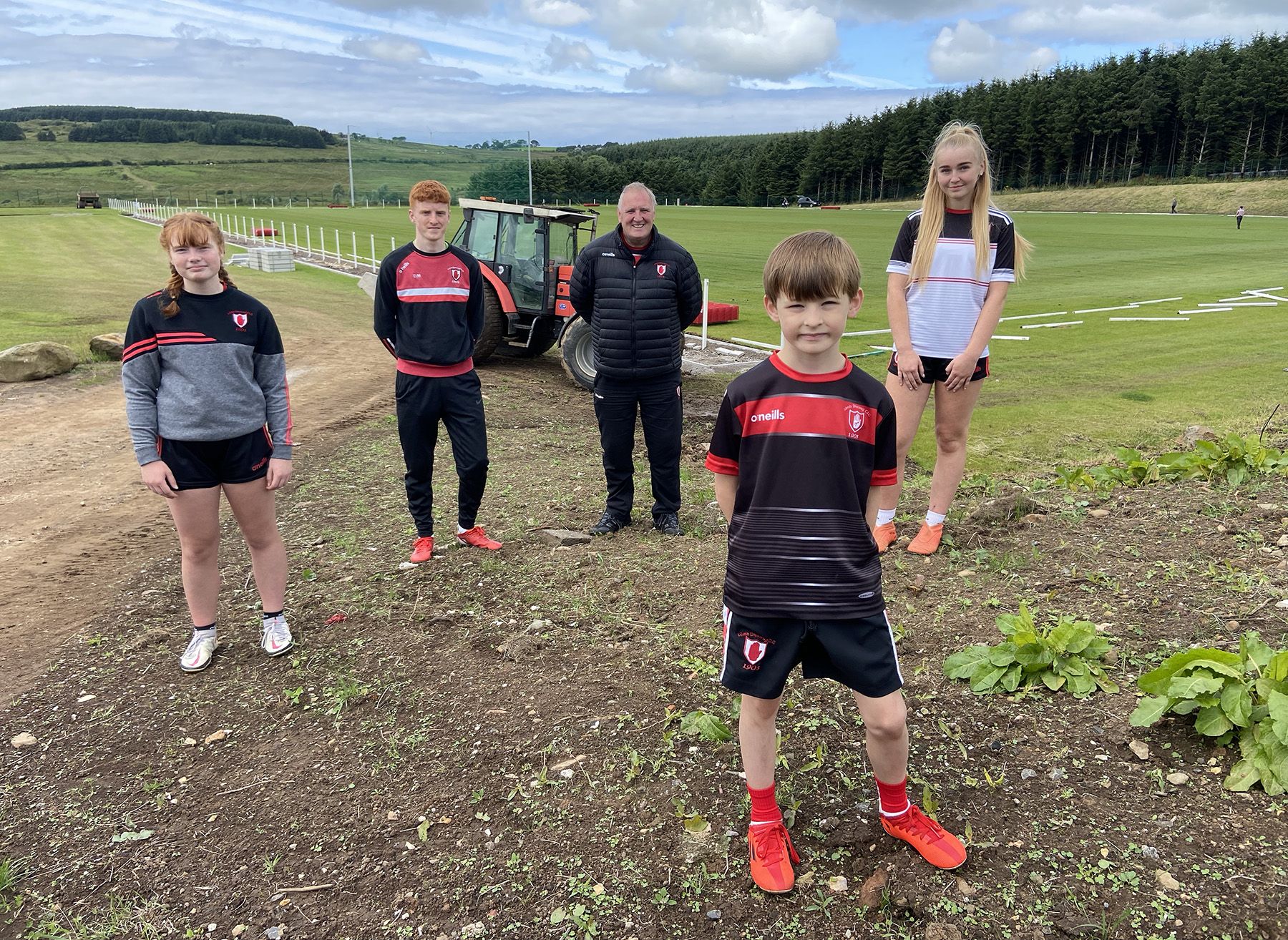 One West Belfast GAA club will be celebrating the opening of their new pitch, and also the growth undertaken by the club in recent years with a community festival next weekend.

Lámh Dhearg, based in Hannahstown on the outskirts of West Belfast will be celebrating its growth over recent years and holding several events to celebrate the new pitch.

Paul Buchanan, Public Relations Officer for Lámh Dhearg and Chairman of the Pitch Opening Committee spoke on the club's efforts to get the new pitch, and how the need for another one came about.

“In 2016 the Committee created a five-year Development Plan 2016 – 2021. The most important target of the plan was the necessity for a second pitch to cater for the growth of youth and senior players across football, LGFA, hurling and camogie.

“Around five years ago three longstanding and highly respected  members Joe Finnegan, Frank Fitzsimmons and Pat McCague couldn’t believe how our senior teams couldn’t get on the pitch to train because we had an upsurge in teams especially camogie and  ladies football.”

The decision was quickly made that the club would be in need of a new pitch and Joe, Pat and Frank began going around and knocking on doors asking for donations, and were overwhelmed by the generosity of donations from members. As the response was so enthusiastic we established a Pitch Development Committee to create a brand new state-of-the-art pitch and training pitch.

“It’s not only a great asset to our club and our teams but also to the county as it gives us more opportunity to play different games at different times,” said Paul Buchanan.

“Over 240 patrons have donated to the pitch either through donations or standing orders and the pitch is the result of their generosity. We’ve had practically no funding from any sporting agencies or the government and this has been self-financed by the club. Red Hand's pitch and patron scheme were the work of the development committee.

“The generosity of our members and patrons is much appreciated and will provide our younger members with the best of facilities to nurture and develop their interest in Gaelic games.”

He listed some examples of the fundraising and efforts club members went to raise money for the new pitch.

“One of our juvenile members Maddie McDonald went out trick or treating for Halloween and donated her money to the pitch development fund.

“We also held two very popular golf classic days at Balmoral which sold out and we are very appreciative to everyone who participated and sponsored a tee and for those who bought from our auction of items after the entertaining history of Lámh Dhearg chat show, which featured club legends Joe Finnegan, Sean McElhatton, Pat McCague and Frank Fitzsimons. We also utilised the National GAA Draw twice to boost funds for the new pitch.”

Flashback picture today of the parade at the opening of the pitch on Monday 23rd April 1984.

Excitement building for our parade on Sunday 7th August from Hannahstown church to the new pitch which promises to be a colourful spectacle. pic.twitter.com/4d0BLRlo28

Speaking on the upcoming festivities to celebrate the opening of the pitch, he stated some of the activities which would be taking place including a senior citizens tea dance on Friday, August 5.

Paul said: “The senior citizens of this community over the years have been very supportive of this club and we want to recognise that and acknowledge it, and we will also be reaching out to cross-community groups across Belfast as well.”

At 7 pm on Friday, August 5 there will also be a photographic exhibition in a marquee, funded by Belfast City Council.

During the launch of the photographic exhibition, Lámh Dhearg will also launch their commemorative programme, alongside special commemorative t-shirts and retro jerseys. 65 children under the age of 14 will also be taking part in a sleepover at the club to symbolise the future of the club.

Paul noted: “This sleepover will symbolise that the development of the new pitch and the new pitch is for the younger generation, it’s for the future.”

At 5.45 am on Saturday, August 6, the club will be hosting the ‘Dawn Walk’ around the club's highway to health which will symbolise a new beginning and future for the club.

From 10 am-4 pm there will be a festival of Gaelic games where every one of Lámh Dhearg’s teams will get the opportunity to take to the pitch to play against other local clubs. During this time, a community summer market will also be held in the marquee with a BBQ for the local community and those who wish to attend.

On Saturday evening they will play their opening JHC game.

Sunday, August 7 will see the main event which will feature a parade from Hannahstown Chapel at 2.15 pm, marching behind a piper to the pitch and the pitch will be officially opened by Ciaran McLaughlin, President of the Ulster GAA and Lord Mayor of Belfast Christina Black.

The pitch will then be blessed by Fr Kevin McGuckien followed by dancing from the Ferris Bunting School of Irish Dancing, followed by a grand carnival sports day for everyone featuring egg and spoon races, wheelbarrow racing, long kick and long puck competitions. The weekend will conclude with an evening’s entertainment in the clubroom.

“It's hard to believe that our field of dreams is now nearly a reality, and we can’t wait to proudly open this pitch and celebrate how our club has grown.

“When the first pitch opened in 1984 we had seven teams in total, now we have over 39, and part of that growth has come from ladies' football, and from camogie and has really helped to diversify the clubs’ identity and membership.

“This year we have two senior teams for ladies football, and compete in minor level for camogie, and will be progressing into senior levels in a few years. It’s a great time to celebrate, yet we have further plans to expand and develop our facilities, such as by getting floodlights, a ball wall and expanding our popular highway to health to enhance our oasis of Gaelic games and I have  every confidence that our members and patrons will continue to support us positively.”

Paul also made an appeal for any former club members to come back to join in the celebrations at the weekend and said that he knows of even some members who will be returning from distant places such as France, Qatar and the Netherlands etc.

The weekend will no doubt be a historic and landmark event for the Hannahstown club in their distinguished history. 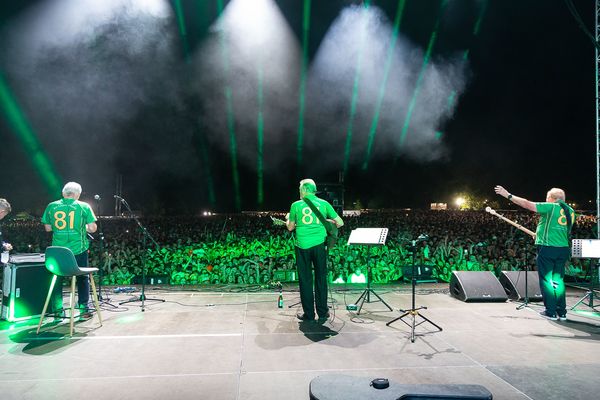 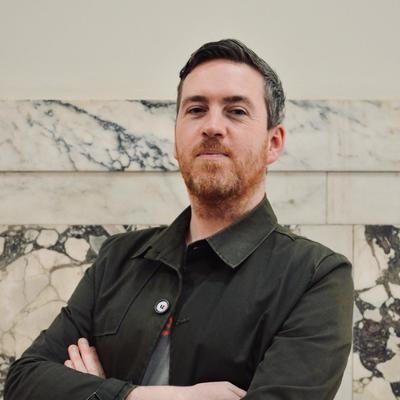 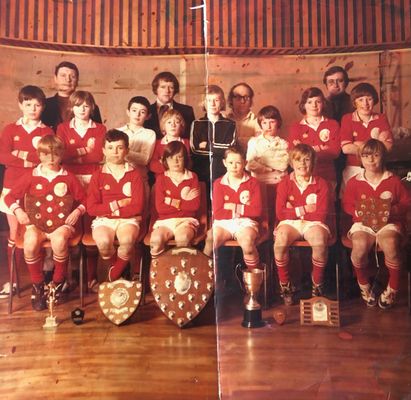