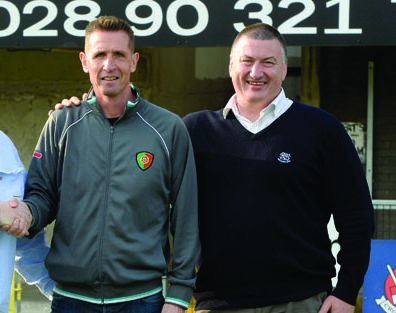 Crusdaers’ Vice-Chairman Mark Langhammer (right) believes and all-island league is vital if the game is to make any progress Photograph: Stephen Hamilton/Presseye

Mark Langhammer, Vice-Chairman of Crusaders FC asks: “Why was the all-island League rejected?”

Yet with a population of nearly 6.6 million people, why do leagues in countries with similar populations, like Denmark, grossly out-perform Irish clubs in European competition? That’s the question Kerry tech-entrepreneur Kieran Lucid and his All-Island League advocacy group have been posing.

Both the northern Irish League and the southern League of Ireland suffer from low revenues, no substantial broadcast deal, low commercial sponsorship and regular cash-flow crises. An all-island league has widely been seen as a key proposition to improve standards, performance, stadia and incomes.

The northern Irish Football Association (IFA) flatly rejected the initial “full fat” proposal for an All-Island league in late October 2019.   The most recently revised proposals of Lucid’s All-Island League Advocacy Group, included a detailed, persuasive and extensive report prepared by ‘Hypercube’, a Dutch analytics company. This appears to have been flatly rejected with little or no discussion.

The latest ‘compromise’ would have seen a ‘split-season’ with Northern and Southern leagues competing separately in the first half of season – each club playing each other twice – before an All-Island League phase of 13 matches and a ‘King of Island’ knock-out phase as a season’s finale.

The proposal dealt with the vexed issue of European qualification places, the main initial barrier, and preserved the respective authorities of the IFA and FAI. So why have the IFA rejected it?

The IFA President, David Martin, set out his reasons in an extended interview/article in the Sunday Life, on May 17. He set out three broad grounds.

First, the rejection came after “careful consultation”. Did it? Crusaders FC have been a leading club in the north over the past decade, and hold the highest European co-efficient ranking of all northern clubs. Crusaders weren’t consulted. I am not aware of any other club who has been consulted.

No IFA or NIFL (Northern Ireland Football League) consultation paper has issued, on an issue of the utmost importance. And my understanding is that five of the six top clubs (by current position) remain prepared, at minimum, to fully test the concept.

Second, Mr Martin cited “uncertainty over finances”. There is a “chicken and egg” element to this reason.

It is impossible to wholly ‘bottom-out’ the level of commercial support a new all-island league format would attract. The market will decide.

Broadcasters and commercial sponsors have been sounded out, with detailed briefs and business plans exchanged. The soundings are positive.

Even taking the most conservative assessment of the revised Hypercube format, the levels of finance on offer are significantly ‘north’ of current incomes.

If the IFA had been prepared to await UEFA’s formal views on the AIL concept, commercial and broadcast incomes could actually increase from Hypercube’s conservative estimates. One is tempted to respond that broadcast and commercial incomes to the current leagues couldn’t be worse.

Take the current TV deal in Northern Ireland. The IFA pockets around £60,000 from the BBC. A further £3750 is distributed to each of the 12 senior clubs.

For Crusaders, the switch from Saturday to Friday night games reduces food, drinks and hospitality income. If the match is a sell-out, we lose seating capacity to accommodate camera angles. We actually lose money through the TV deal, notwithstanding the benefits of broadcasting domestic games to a wider audience!

In effect, I believe that the latest IFA rejection has nothing to do with uncertain commercial incomes. It has everything to do with blocking the proposal from UEFA eyes, where the proposal is seen as ‘in-line’ with current UEFA thinking. Those closer to the proposal have high confidence that incomes from an all-island league would be transformative.

Finally, Mr Martin stresses that Senior football a priority for the IFA: “Since the NIFL came into existence in 2013 and before that when clubs were under the umbrella of the IFA, senior clubs have been a priority for us. They are the flagship of the local game…..We want to improve significantly the League’s club co-efficiency rating on the European stage.” And that: “The senior game is prominent in the five pillars of the Irish FA’s five-year strategy”.

These are astonishing remarks given the evidence. On Mr Martin’s ‘watch’ as IFA President, it is sobering to reflect that the Irish League fell as low as 52nd ranked of 55 European Leagues (it currently sits at 48th, largely due to Linfield’s impressive European campaign in 2019).

How has our League plummeted lower than Malta, just squeaking above the leagues of Gibraltar, Montenegro, Kosovo, the Faroe Islands, and Estonia?

Investment, mainly. The Irish Football Associations 2017 strategy set ambitious targets for the domestic league to break into the top 40 of European leagues, a big ‘ask’ requiring serious commitment and investment. Here, the charge-sheet for the IFA makes dismal reading.

The IFA commits to “rebuilding the football estate” with “significant high-profile redevelopments of NIFL Premiership grounds”. None have materialised, yet the IFA receives over €1.1 million every year to help develop stadia and facilities through UEFA’s ‘Hat-Trick’ fund. No club or grass-roots facility has received a penny of this since Cliftonville’s 3G pitch received assistance in 2010. Where has it gone? That, according to the IFA, is “commercially sensitive”, even for members of the Association.

The IFA committed to “help support the club’s preparation for their European matches” including “the provision of top facilities”, “help with releasing players” and “coaching clinics”, “lifestyle programmes” committing the Association to “fund courses for clubs and will provide experts to help guide and form the clubs’ training and nutrition programmes for players.”

Beyond a cursory offer for the international manager to take a training session or two, no club – to my knowledge - have received any assistance.

A further commitment was that: “The Irish FA will provide a pot of funding to be used to help pay for administration staff at NIFL Premiership clubs. Our aspiration is that through our funding and through other partner support there will be a full-time administration officer in every NIFL club.” None has been provided.

Strand B of the UEFA Hat-Trick monies is allocated towards the “running costs of Associations and good governance projects” along with running UEFA tournaments and meeting UEFA commitments. Many of these commitments require the involvement of clubs. The Irish FA received €1,250,000 in 2018-19 under this strand. This includes funding for referees, coaching, grassroots, womens’ football development, elite player development, social responsibility programs, and “integrity” programmes. Little or none of it reaches League clubs or to League administration/governance. How this money is spent is, again “commercially sensitive”.

This month, following UEFA’s announcement that they had released over £200m “to help its 55 member associations meet the challenges of Covid-19 in their respective countries”.

The IFA's share is around £4m, and it has been explicit that none of this will issue to grassroots, youth, womens, intermediate or senior league clubs.

UEFA ‘Solidarity’ funds, for youth development, is normally passed on the clubs, though it can be withheld for months or years to ‘cash-flow’ the Association. Rather like Father Ted Crilly’s apt defence: “it was resting in my account”.

The only ‘positive’ on the balance sheet was that the IFA have pressed the need for a change in seasonality, to allow local clubs a competitive run-in to European competition. The fault, or tardiness to adopt this obvious, ‘no brainer’, change lies with clubs.

Who does it better?

This time last year, a group of coaches and administrators visited Iceland to see how they do things.

The Icelandics, with a tiny population of just over 320,000, sit above Northern Ireland in the rankings and qualify regularly for World and European championships in the senior, youth and womens’ game.

With the clear out of Delaney and his cronies in the Republic, our sister clubs in the South have a rare opportunity to change things. Kieran Lucid’s all-island league concept is widely supported.

By stark contrast, the governance and lack of transparency at the IFA is startling.

Our “commercially sensitive” Association is charged with subsidising an outsized empire on the back of monies allocated to clubs and the game as a whole. That’s why we lie 48th of 55 countries.

It’s not that “There’s something rotten in the state of Denmark”! It’s much closer to home, and it’s time for change.