Large crowds turn out to say farewell to Father Reid 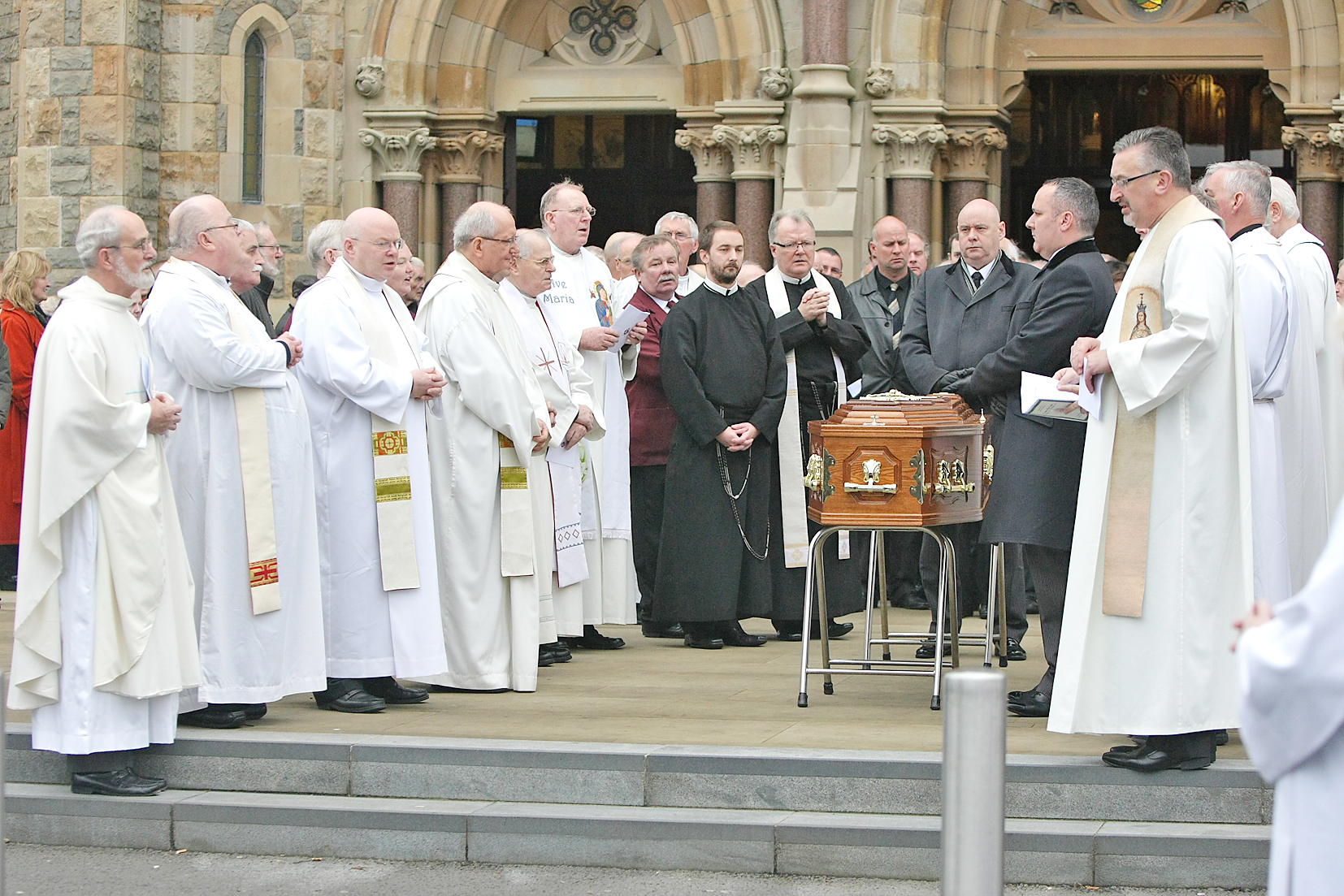 Clonard’s Church of the Most Holy Redeemer was, appropriately, filled with both tears and laughter yesterday (Wednesday) as people came together to give thanks and celebrate the life of Fr Alec Reid.

In a large operation usually reserved for the annual Novena, stewards lined the car park to direct the heavy flow of mourners who had come from far and wide to pay their respects to the much-loved Tipperary priest who made West Belfast his home.

In a scene straight from Vatican City, scores of nuns and priests converged on the church for the two-hour Mass for the 82-year-old who passed away last Friday. They mingled with political figureheads from both sides of the political divide and the border, former republican prisoners and, of course, parishioners from Fr Reid’s beloved Clonard district.

And in a testament to the hard work on outreach at which Fr Reid excelled, the DUP was represented and Mike Nesbitt, leader of the UUP was also present. John Hume and the SDLP’s Mark Durkan and local brothers Alex and Tim Attwood also took their seats in the beautiful packed-to-capacity church for the celebration.

But it wasn’t just local politicians that turned out for the funeral. The US government was represented by US Consul General Gregory Burton, Enda Kenny and Irish President Michael D Higgins both sent representatives while former Irish President Mary McAleese made the journey along with her husband, Martin.

The Celebrant, Clonard Rector Fr Michael Murtagh, welcomed the large congregation which, he said, was a testament to the impact of Fr Reid’s life.

Fittingly for this peacemaker, the Gospel was The Beatitudes from Matthew’s Sermon On the Mount.

Redemptorist Fr Michael Kelleher delivered a moving homily about his brother in clergy who, he said, loved the people and the streets of Belfast. “He said that whatever he learned about peace-making,” said Fr Kelleher, “he learned on these streets between 1968 and 1998.  For the last number of years, he wanted to share what he called his Lessons from the Streets.”  Fr Michael  went on to share each of the seven lessons, giving a real life example from Fr Reid’s days on earth – including the challenges of acting as a go-between for Sinn Féin and the SDLP in the early days of the peace process – to each religious message.

“I’m sure Fr Alec would like me to offer you an invitation today,” he said, summing up the Lessons from the Streets. “An invitation to become peacemakers here in the shadow of Divis and Cave Hill and beyond.  An invitation to go from here having put on the armour of God.  An invitation to take up the shield of faith, the sword of the Holy Spirit. Be peacemakers.  Know that without the Lord we can do nothing.  Recognise the dignity of the human person.  Be committed to dialogue and to the importance of the male/female dynamic in all human life.  Blessed are the peacemakers; they shall be called children of God.”

Referring to the time when Fr Alec Reid gave the British queen the thumbs-up, Fr Kelleher concluded his touching homily with a personal story.

“Over the past few years we have had some hearty laughs together.  That little postcard was in Fr Alec’s bedroom in St Vincent’s when he died and the undertakers put it in the coffin with his remains.  I saw it there and smiled. I pray and am confident that Jesus, the Redeemer, the Supreme Peacemaker, the Word made Flesh, will have given Fr Alec the thumbs-up last Friday as he arrived in Heaven.”

Following communion, Fr Reid’s friend, the former President Mary McAleese, spoke warmly of a man who liked to do things his way, Christ’s way, but not always his superior’s way.

“I recall he was moved from here once,” she explained.  “He agreed to go... but he never went.”

She spoke of a priest who was “not a liturgy and lace man, but a humble and ever faithful servant of Jesus.”

She went on: “In a world where people barricaded against one another, there often seemed little space for Christianity to flourish. Then came the quiet and humble figure of Fr Reid.”

She spoke of his “careful and quiet care of the embryonic peace process” and, in a nod to his love of hurling, said he quietly coached the team that scored “the great goal of peace”.

“May Alec now rest in his richly deserved heavenly peace.”

Bishop Treanor then addressed the congregation and spoke of the tribute that Fr Reid paid to West Belfast when he chose this district to rest for an eternity.

“That this son of Tipperary, of great hurling prowess in his youth, chose to be buried here among us speaks eternally of his bond with the people of Belfast and the generations he served during his forty years of priestly ministry here,” he said.

“On behalf of the bishops, priests and parishioners of the Diocese of Down and Connor I offer my condolences to his family and to the Redemptorist community in Clonard. I thank the Redemptorist Congregation for Fr Alec’s work and priestly ministry among us for over 40 years. That ministry as a priest and Redemptorist was the source of immeasurable blessings for countless individuals.”

As Fr Reid, carried by his fellow Redemptorists, who also formed a guard of honour, made his final journey from his beloved Clonard church, the congregation broke into Slievenamon, the lilting anthem of the Tipp hurlers.  And as the cortege made its way along Clonard Street, residents came to their doors and bowed their heads to show respect for the man who choose to forever remain in the shadow of our own Sliabh Dubh.