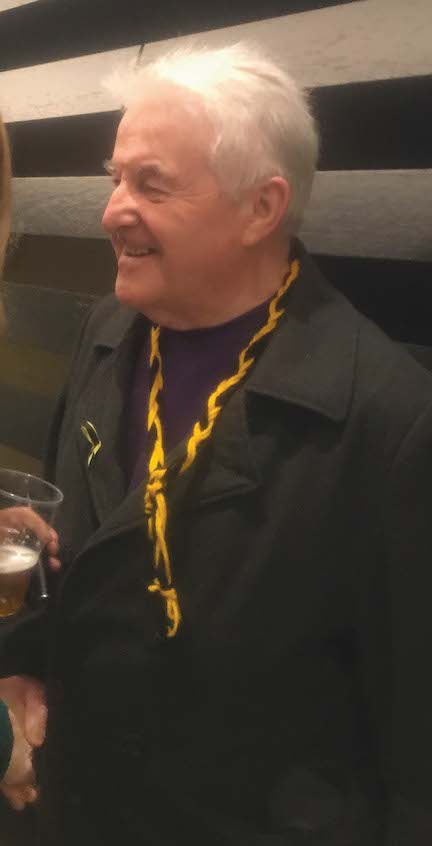 BILLY QUIZ: A man with all the questions and all the answers: Billy Gillen.

“Who would you associate with a Monstrance?”

“What is a paraprosdokian?”

I was delving in a cupboard the other day and ended up with an old school copybook in my hand. On opening it I found it contained a series of questions and the questions above leapt out at me.

I immediately realised that the book contained sets of questions for pub quizzes which had been made up by Billy Gillen.

Before the advent of smartphones Billy presented pub quizzes at many different pubs and clubs. Originally from the Falls district, Billy has been resident in the north of the city for many years where he has deployed his talents.

He knew how to keep his audience entertained. His quiz usually had eight rounds. Each of the first six rounds had a theme. Thus we might have Round 1:  Rivers of Ireland. Round 2: Definitions (the first  question above came from this category). Round 3: Picture round, Round 4: Music round. Round 5: More pictures. Round 6: Contemporary news.

For the last two rounds most division 3 teams were fed the answers from members of division 1 or 2 teams, who were now no longer their competitors, to ensure that the dreaded zero score was avoided. At this stage of the quiz the quizmaster ignored the secret conversations. He regarded this as “good dialogue”.

Billy was a very astute quiz master. He knew his audience strengths and weaknesses and he worked to ensure that everyone’s interest was held until the last few questions of Round 8. He was also aware of their preference of categories of questions. At a GAA club you might be asked about the nickname of Kerry or the county colours of Cavan but in the pub it was more likely to be about Man Utd or Liverpool FC.

On the night he asked the question about the Monstrance he knew he had erred. He turned a blind eye to redbearded Bob who phoned his wife on the pub phone. Billy knew it was a mixed marriage! He had several requests for the spelling but was “unable to help”. Eventually he called in the answer papers. As the next round was a picture round he had plenty of time to deal with his dilemma. He checked all the answers and realised he had not one correct response about the Monstrance. He would have accepted, priest, Catholic Church, Fr Paddy, Pope, bishop etc but got none.

“Unfortunately Maura’s atrocious handwriting has let me down and I've made a dreadful mispronunciation of question No.6. I should have said ‘demonstration’ and as everyone knows that is what the Orange Order have every 12th July, so no problem there for anyone. Everybody got that right.”

I spoke to Billy last week, “The lockdown is doing my head in,” he told me.

Billy is a great source for Irish historical books and he had a good one for me but there was a sting in his tail. As he gave me the book he said, “You didn’t remember my birthday, did you?” Before I could answer he asked, “Can you remember what age I am?” It was like another quiz. I told him I wasn’t sure about his age but would guess it was somewhere between 79 and 81. “You're 100% right.” It began to look like I would be in Division for the last two rounds!

I got my question in first.

“Billy, what on  earth is a paraprosdokian?”

“It's a bit hard to explain. The first part is a figure of speech but the second part is unexpected. Here's an example from Winston Churchill speaking about the Allies defeating Germany in World War 2: “History will be kind to us for I will write it.”

He then gave another more mundane example. You have been playing football in the street. The ball goes over your head and breaks a window. You are nearest. The woman of the house comes rushing out and catches hold of you as all the others disappear. You claim your innocence. She points at the broken window and says, “I didn't say it's your fault. I said I'm blaming you.”

Billy then changed the subject. “You didn't get me anything for my birthday.”

It had been arranged by a few of us to have a cake and candle, a bottle of clear Irish poitín and a Powers ready for a Tuesday night but the Three Cs was closed down the week before his birthday. I told him I'd bring down a few cans of Guinness.

Billy gave me one of those knowing smiles of his.

“I've been drinking Guinness for sixty years – wee bottles, big bottles, Single X, Double X. What the advertisement says is true. Guinness is good for you but d’ye know what? I'd sooner drink it out of a pisspot before I'd touch a can.

“That's another paraprosdokian for ye.”