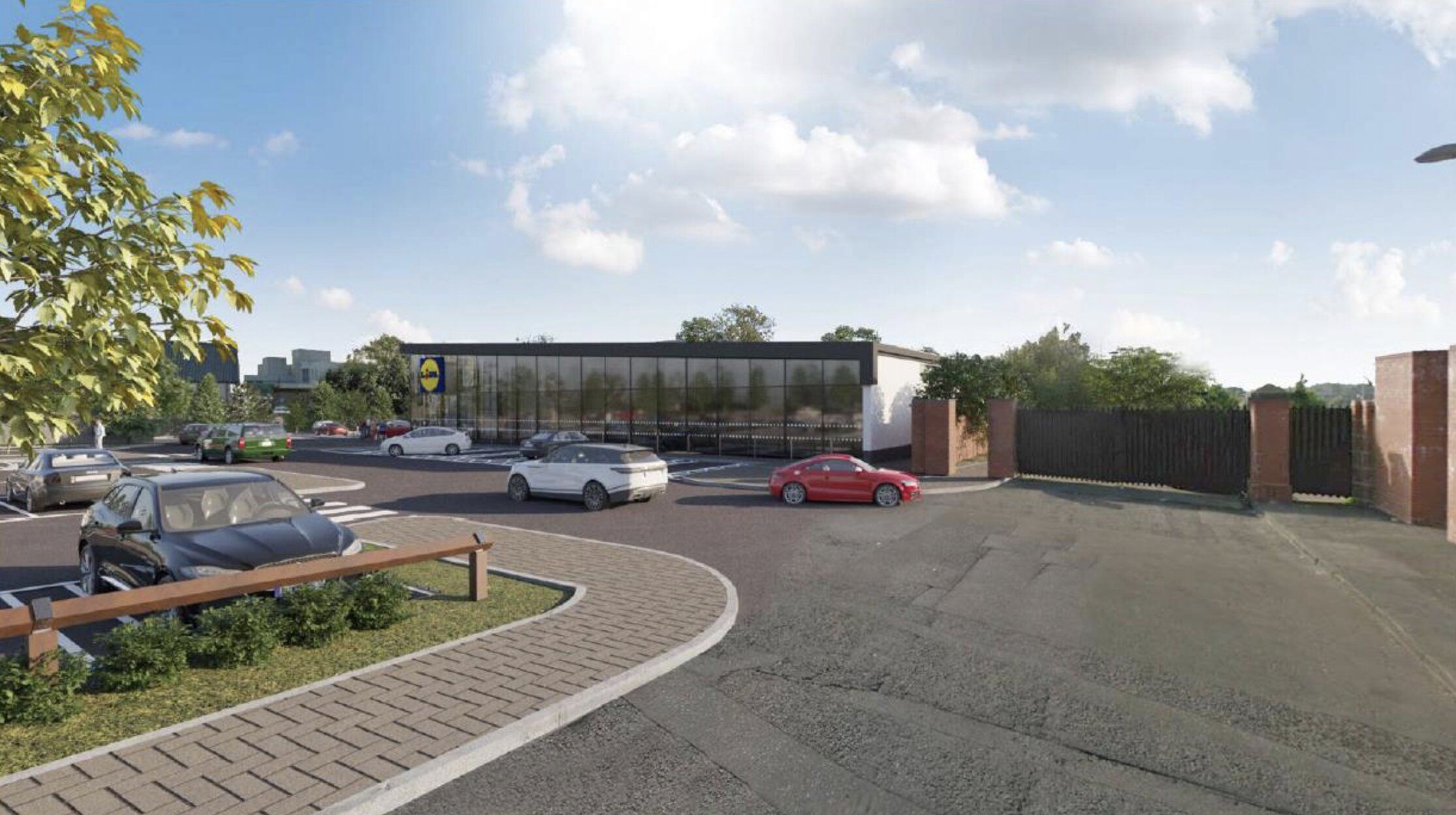 REDEVELOPMENT: Plans for the redevelopment of the Lidl store on Stewartstown Road have been approved by Belfast City Council. Above, how the store will look

A PLANNING application for the demolition of the current Lidl store on the Stewartstown Road and the construction of a new store has been approved by Belfast City Council's planning committee – despite an objection from DUP MLA Edwin Poots.

The application proposes the development of a new store at the site which will be significantly larger than the current store at 2,475 square metres (sqm), an increase of 1,095 sqm.

To facilitate the redevelopment, Lidl are planning to take ownership of seven per cent of the communal land owned by the Housing Executive at the rear of the site.

This area has a reputation of attracting anti-social behaviour and is the site of the local Twelfth bonfire.

As part of the proposal, Lidl have committed to investing £281,482.75 in two outdoor facilities including the development of a Multi Use Games Area (MUGA) at Suffolk Playing Fields and an upgrade of the pitch at Lenadoon's Millennium Park.

Objecting to the proposal, the DUP's South Belfast MLA told the planning committee that the proposal of a 20m by 40m sized MUGA at Suffolk must be upgraded to a 60m by 40m in order to be acceptable to the local community.

"I have been working with the Suffolk community since last summertime," he said.

"It is a very isolated community, even though it is in a built-up area. They don't have political representation from their community within the City Council or indeed in the Assembly and they have significant concerns that need to be addressed."

Mr Poots said that at the outset, it was suggested that a 60m by 40m MUGA would form part of the proposal, an issue which was later clarified as coming on to the table after Mr Poots made an initial representation on behalf of the Suffolk community.

"I wish to make it very clear that a 20 by 40 MUGA will not suffice for the needs of this community," he continued.

"They have not had the investment in this community over the last 40 years. If one looks around the area within a couple of miles you will see new leisure facilities, new recreational facilities but Suffolk has not had investment for a very long time.

"Therefore, it came as a surprise that a substantial chunk of the money that was being set aside by Lidl is actually being taken away from Suffolk and being utilised elsewhere because it is Suffolk who are losing the land.

"It is the Suffolk estate alone that the open space is being taken from. I have to say that the community are unhappy at the 20 by 40 proposal but they would be much happier where an amendment made to reflect the condition to what they had always agreed to which is a 60 by 40 facility."

A representative for Lidl told the committee that they had been engaging with the community since May 2020 and a number of proposals had been put on the table before arriving at the agreement for a MUGA including opening up the nearby river for tourism.

Alan Mains said: "The 20 by 40 size was one that we did put on the table but Mr Poots is quite right to say that when he got involved which was some time quite far down the road, that he picked up the representation that they wanted a bigger one which they wanted to be financially viable as they wanted it to be a business."

Responding to Mr Poots' input, Sinn Féin Cllr Matt Garrett refuted the suggestion that the community do not have representation, as he is the local councillor for the area.

"To correct a few of the issues that he [Edwin Poots MLA] raised, within the Ladybrook ward there are five council amenities, four of them are within the Suffolk estate, the other one is on Blacks Road.

"They are Carnanmore Park, there are five council football pitches, one of which is under a Service Level Agreement with the Council and Suffolk Swifts Football Club who got a changing facility through the local investment fund, got dug-outs and brought up to Intermediate standard.

"Carnanmore Park has recently gone through the playground refurbishment scheme and had enhanced features installed in the play park, so I don't think it is accurate to say that there aren't proper facilities in the area."

Mr Poots added that he would be submitting a Freedom of Information request to clarify the level of investment from the Council within the Suffolk estate.

When put to a vote, the proposal was passed unanimously and will now go before full council in February for ratification.