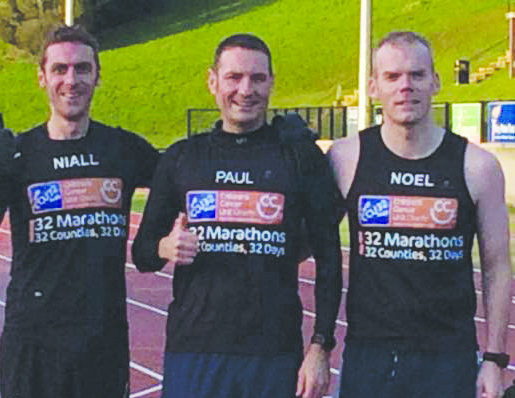 THE training is done and the itinerary set for a number of local runners who are about to take on a mammoth challenge in aid of the Children’s Cancer Unit at the Royal Victoria Hospital.
On Thursday at the headquarters of sponsor Manfreight in Portadown, Paul Tyrell, Noel McNally and Niall Farquharson will set off and head to Armagh to complete a marathon around the city’s park run course to start an epic journey of a marathon in each of Ireland’s 32 counties on consecutive days.
They will be joined at various stages by Beechmount Harriers clubmates, Brendan McNally and Damien Grant over the 32 two days as they aim to complete a quite remarkable challenge.
After they complete their first marathon on Thursday, it will be on to Tyrone on Friday, Derry on Saturday and Louth on Sunday as they begin clocking up the miles and eventually crossing the finish line on home turf at the Mary Peters Track on Sunday, September 2.
“Paul Tyrell is doing all 32 marathons,” confirmed Grant who will do over half the challenge alongside his friends.
“In partnership with Beechmount Harriers, there is going to be at least one or two people following Paul every day, like myself and Brendan.
“Brendy is running 21 marathons and I’m running 20 of them, so it’s all good. “Everything is positive and we have just been doing promotional stuff leading into it and things have picked up.
“The running side of it, we have all done our training so it’s time to cool down and ease off a bit to let the body recover. We are all looking forward to it.”
Of course, there is a point to all of this and raising money for charity is the primary objective.
The Children’s Cancer Unit at the Royal Victoria Hospital, which exists to support the work of the Children's Cancer and Haematology Unit at the Royal Belfast Hospital for Sick Children and their families, is set to benefit from the lads’ efforts over the 32 days and a target of £100,000 has been set.
They hope to raise enough to pay for the purchase of a much-needed ultrasound scanning machine.
Currently, over £20,000 has been raised and it is hoped the public get behind their efforts and donate and also take part alongside them if even just for part of the way on any given day.
“We are sitting at £20,000 at the minute,” confirmed Grant.
“That’s all before we’ve even started running. We haven’t put a foot out yet so that is fantastic.
“The £100,000 for the Royal Victoria Hospital is going to kids who are sick.
We are blessed that all of our kids are healthy, so this is a big push for them to give something back to a local charity.
“Noel decided we should do it for them as they don’t have a massive fundraising team and we can help them out.”
On the event website, ccu32.com or on their Facebook (CCU32) or Twitter (@CCU32challenge) you can follow their progress with Paul Tyrell planning to do a daily vlog.
There is also info on their marathon schedule and, most importantly, how to donate to ensure their remarkable task is the success it deserves to be.
Donations can be made through the website ccu32.com by card, or donations from £2 to £10 can be made via text message on 70070 (type CCUC99 followed by amount ranging from £2 to £10).