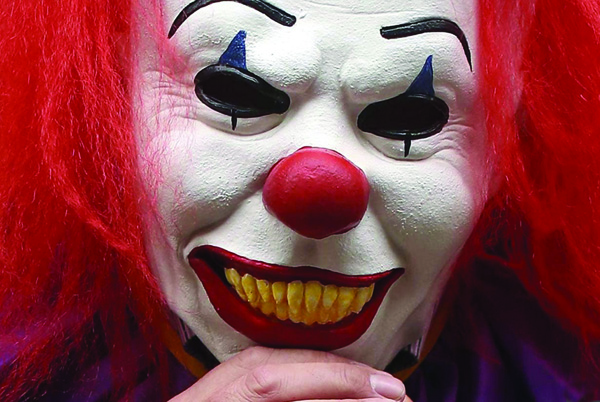 ‘Killer clowns’ have caused much controversy in recent weeks

THE growing controversy over ‘killer clowns’ has led a North Belfast school to slap a ban on kids wearing the costumes at Halloween.

Holy Cross Boys’ School in Ardoyne has contacted parents to say clown costumes of any kind will be prohibited from the annual mid-term celebrations.

Principal Kevin McArevey said he’s taken the step because of fears being spread by the global craze.

“We are concerned the clown costumes would affect our younger pupils,” he said. “If the P1s or P2s saw an older pupil in any sort of clown outfit it would create a lot of fear so we have taken the decision to ask parents not to send their pupils to school in clown costumes.”

The craze originated in the United States when a woman posted a picture of a clown standing beside a highway sign. She said she feared the person was trying to lure children into nearby woods.

The picture went viral leading to a worldwide explosion of people dressing in the terrifying costume and warnings from police that they would take action against ‘killer clowns’ pictured carrying weapons. PSNI officers in Foyle and Newtownards even took to social media to say they would arrest anyone dressing as killer clowns.

The PSNI in Newtownabbey issued an appeal on October 12 after man dressed as a killer clown was reported to have followed three teenagers along the Glenville Road.

Police said they would take a “zero tolerance, no nonsense approach” to the craze, which is expected to spiral over the Halloween party period.