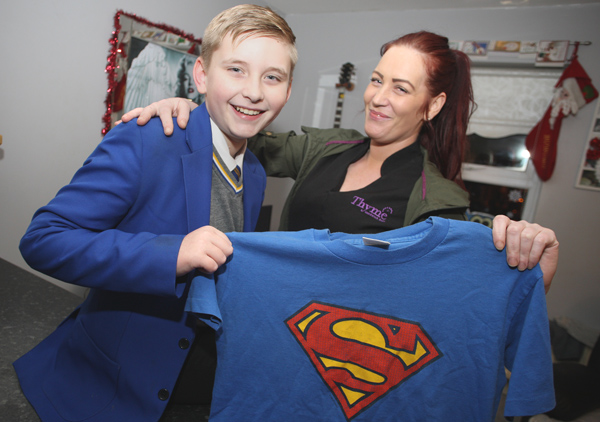 BRAVE: Neil Francis with mum Natalie and his gift from the school

A YOUNG boy from the Cliftonville area has been hailed a “hero” after pulling a toddler from the Waterworks lower pond.

11-year-old Neil Francis Montgomery from Brookhill Avenue was walking through the park with his friends on Sunday when a toddler slipped into the duck pond.

While other passers by looked on in shock, the Edmund Rice College boy leapt into action, jumping into the freezing water to pull the child out.

Speaking to the North Belfast News, Neil Francis said: “Me and my friends were walking out of the playground and this baby walked down towards the pond. We saw a woman pointing towards the baby and he slipped into the water face first.

“All the other people started panicking and they all ran over and people were screaming. I got on my stomach and tried to reach in to get him, but I couldn’t reach so I just jumped in lifted him under the armpits and lifted him out.

“A woman took the baby and cleaned him and dried him. I was scared, but nobody else seemed to be doing anything so I just jumped in. I was worried that it might be a bit deep, but I was more worried about the baby. I’m just really happy that the baby wasn’t hurt.”

Neil Francis has been recognised as hero at his school assembly, and was gifted a superman t-shirt by his religion teacher Mr Wylie.

Paul Berne, acting Principal at Edmund Rice College, said: “We’re delighted that these kids are able to do what they’re doing. It’s the second time our pupils have saved someone’s life in a month. We’re very, very proud of them. They are top class role models for the school. About a month ago a sixth year helped someone in a hit-and-run and now we have this.

It’s great that young people that age are able to do that – it’s incredible. Some people would freeze in these situations. These kids are top class. It’s a very tough thing and a very brave and courageous thing for any child to do.”

Neil Francis’ mum, Natalie, added: “We’re so proud of him. We were scared that he did it, but we’re very happy that he did.”