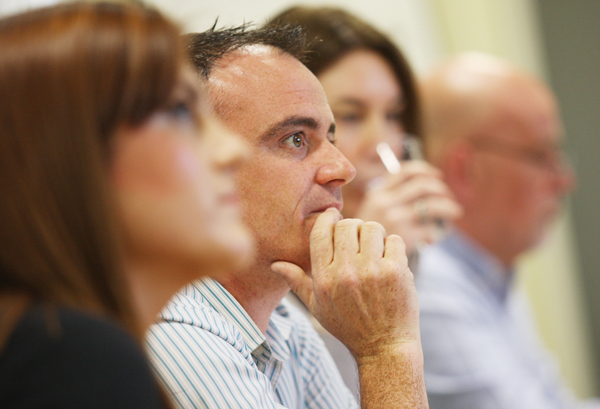 A government deadline to remove peace lines by 2023 should be removed and the interfaces given over to the community, according to a loyalist representative who described the walls as being “part of who they are.”

Dr Johnny Byrne from the Ulster University, Rab McCallum from the North Belfast Interface Network and Barbara McAtamney from the Department of Justice joined her on the panel.

Julie Ann, who is a Progressive Unionist Party Councillor on Belfast City Council, said she was attending the event as a community worker with the Alternatives group and not as a political figure. She said it was up to society to move at the pace of the communities and not impose deadlines.

Responding to figures in a community survey that show 95 per cent of lower Oldpark residents said they didn’t want to see peace lines removed and had welcomed the repainting of the existing interface, Julie Ann said it was positive that people had responded, even though a suggestion by community workers to lower the peace line by one metre was countered with a proposal by residents that the height be increased.

“There was a real concern among the local community about the height (but) it was a success to even have that conversation to get them to the point where they were happy for it to be painted. It’s part of who they are.”

Two residents from Tigers Bay who attended the talk said they also opposed the 2023 deadline, with community worker Dean McCullough branding it “unhelpful”. He said economic development had to be introduced before action could be taken on peace lines.

“Where is the incentive for people from Tigers Bay and Mountcollyer to remove peace walls at present?” he said. He added that the onus was on the government to lead local economic redevelopment.