‘Lucky to be alive’ 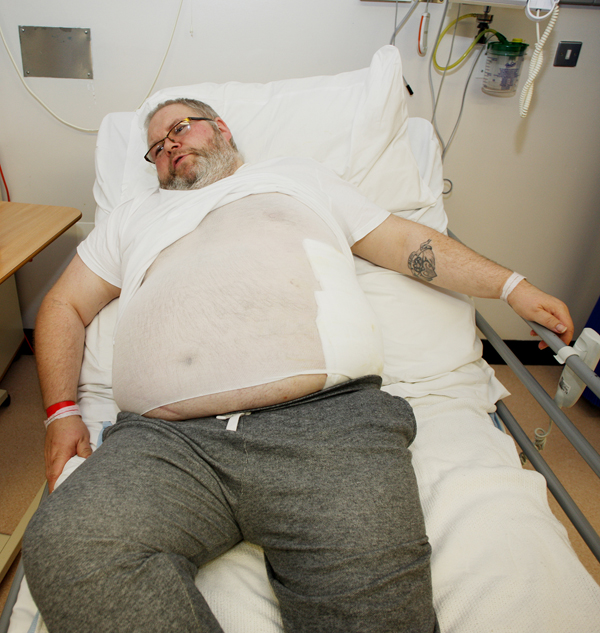 AN Ardoyne man who says he is lucky to be alive after a firework exploded beside him in a chip shop is suffering sleepless nights as a result of the ordeal.

Ross Hayes was at the ‘Oh My Cod’ fast food outlet on Alliance Avenue at around 9.15pm on Friday night when the firework exploded,

Speaking from his hospital bed in the Royal Victoria Hospital on Wednesday, the 47-year-old told the North Belfast News he did not think anything of the device, which looked like a toy initially.

“I went in and ordered two chips. I was standing reading the paper waiting for my order and I noticed a hooded figure at the door,” he said.

“I then noticed what looked like a toy on the ground between me and the front door – like an Iron Man figure.

“I saw smoke coming from it and just thought it was going to go bang.

“A girl behind the counter then shouted for me to get down on the floor. I put my hands over my face and the next thing I noticed was a real burning sensation down my sides.

“My clothes were on fire so I tried to rip my shirt off. I was shouting and screaming and didn’t know if I was alive.

“Two guys helped me outside and got my t-shirt off and poured water over me. I don’t remember much more – I was just in a state of shock,” he added.

Ross suffered serious burns to the side of his body from the breastbone to his waist and is currently in the Royal Victoria Hospital, awaiting skin graft surgery.

Ross’s partner Lisa, who is disabled cannot get to the hospital to visit him. The couple also have a disabled son, Joseph, who is confined to a wheelchair.

The stricken victim has called on those responsible to ‘wise up’ in the run up to Halloween and he admits he is suffering mentally after the incident.

“I’m having flashbacks. It’s affecting my mental health and I’m having problems sleeping.

“I think I was in the wrong place at the wrong time. It may have been a Halloween prank that went wrong,” he admitted.

“I would say to people, simply for these ‘yahoos’ to wise up. If they knew what they put a person through, it would hopefully change their mentality.

“I’m going to be mentally scarred but I still have my life. If it had have been a child or an old person, they would have been killed.

“I can’t help my son or my partner who are both disabled and I won’t be able to return to work until after the New Year at least.”

Detective Sergeant Michael Hawthorne would appeal to anyone who may have witnessed this incident or anyone who has information about it to contact Detectives at Reactive and Organised Crime, Musgrave on the non-emergency number 101 quoting reference 1319 14/10/16. Alternatively, if someone would prefer to provide information without giving their details they can contact the independent charity Crimestoppers and speak to them anonymously on 0800 555 111.