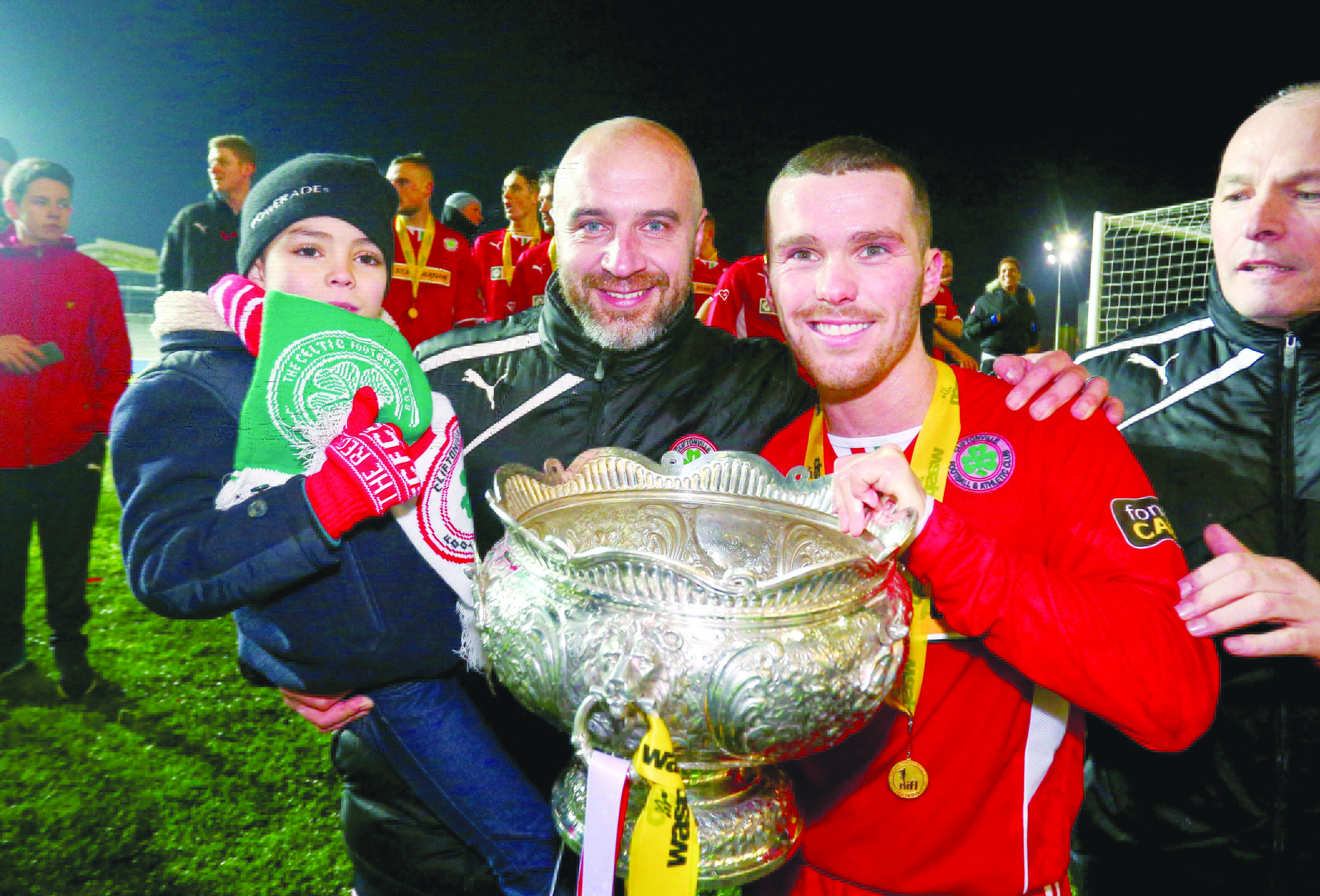 Gerard Lyttle and Martin Donnelly celebrate after last year’s League Cup final. Lyttle is hoping to get his hands back on the cup this Saturday as manager of the Reds Picture - Kevin Scott / Presseye

CLIFTONVILLE manager Gerard Lyttle believes that his side have had their warning as they prepare to take on Championship One side, Ards in the JBE League Cup final this weekend.

The Reds are bidding for an historic fourth League Cup triumph in a row, but face an Ards side that have already dumped Danske Bank Premiership sides Ballinamallard United and Coleraine out on their way to the decider.

Solitude will play host to Saturday’s final (5.30 kick-off) and although home advantage will make Cliftonville even stronger favourites in the eyes of many, Reds boss Gerard Lyttle is not willing to buy into that argument.

“I’ve said last week that Ards in my opinion are a Premiership team,” said Lyttle.

“We’ll not be taking Ards lightly and if we’re not on our game, then we’ll be in for a hard game, so it’s up to our boys to focus and get back training this week, get a good week ahead of us and prepare for it.”

Saturday’s decider is Lyttle’s first as manager of Cliftonville having been appointed initially as interim boss when Tommy Breslin announced his shock departure in September before getting the job on a permanent basis a month later.

Lyttle is eager to claim his first silverware as manager, but insists he doesn’t want the focus to be on him and would rather it be on the players. “Saturday will be something to savour for me,” acknowledged Lyttle.

“Obviously, as a manager you always want to get your first trophy as quickly as possible and that’s an opportunity for me on Saturday to get that, but I don’t want that focus to be on me, I want it to be on the players.

“It’s up to them, there’s a lot of players in the changing room that haven’t had that. The new signings that have come in haven’t tasted the success that we’ve had in the last lot of years, so it will be good for them to get their first trophy under their belt as well. “I’m sure we will be well prepared and well tuned in, so hopefully we can get our League Cup and keep it here.”

Cliftonville kept their third successive clean sheet during Saturday’s 4-0 win over Sport and Leisure Swifts in the Tennents Irish Cup and that pleased manager Lyttle.

“It has been well documented in the previous games before that we had been leaking goals,” said Lyttle.

“We’ve worked on a few things, talked about a few things and the pleasing thing is we have kept three clean sheets, regardless of who it is against. I thought against Portadown we were very very good.

“I thought we should have won by more than 1-0, but the thing was we kept a clean sheet against a team that on paper is as experienced as anybody.

“They’ve players like Twigg [Gary Twigg] and McAllister [Mark McAllister] on their team. “On Saturday, Sport and Leisure came to frustrate us.

“They played five at the back, four in midfield and one up top, so it’s up to us to try and break that down and it can become very frustrating, but the thing is just being patient and picking the right moments, picking the right time to open teams up and that’s just what we’ve got to be prepared to do.”

Jay Donnelly has hit form at the right time with a hat-trick against Sport and Leisure Swifts and a goal against Portadown which has brought his tally to the season to 14 goals.

Donnelly will be expected to partner David McDaid upfront in Saturday’s cup final, with new signings Darren Murray and Daniel Hughes cup-tied for the showpiece.

Lyttle is delighted with the form of McDaid and Donnelly who have managed 31 goals between them this season and has tipped Donnelly to have a bright future ahead of him.

“Jay [Donnelly] is a kid I’ve known very well, I’ve had him in an academy before Cliftonville here and I’ve coached him for a long time. I know him personally, I know what ticks for him, I know what doesn’t and I told him that he just needs to trust me in terms of how I manage him and if I do leave him out to rest him, it’s not because of his performance."

“He is as good as anyone I’ve seen. He has all the right credentials to be a top top striker. He is now playing with confidence and he is excellent in the air. Technically he is very good, but the big thing that he has is the work rate.

“His work rate is unbelievable. Last week against Portadown there was one that broke from a corner and Jay was the last man in our box marking from the opposite side.

"He has that real desire and will to win which for a young man is something. If he keeps his head on the ground and keeps working hard he has a great future ahead of him."