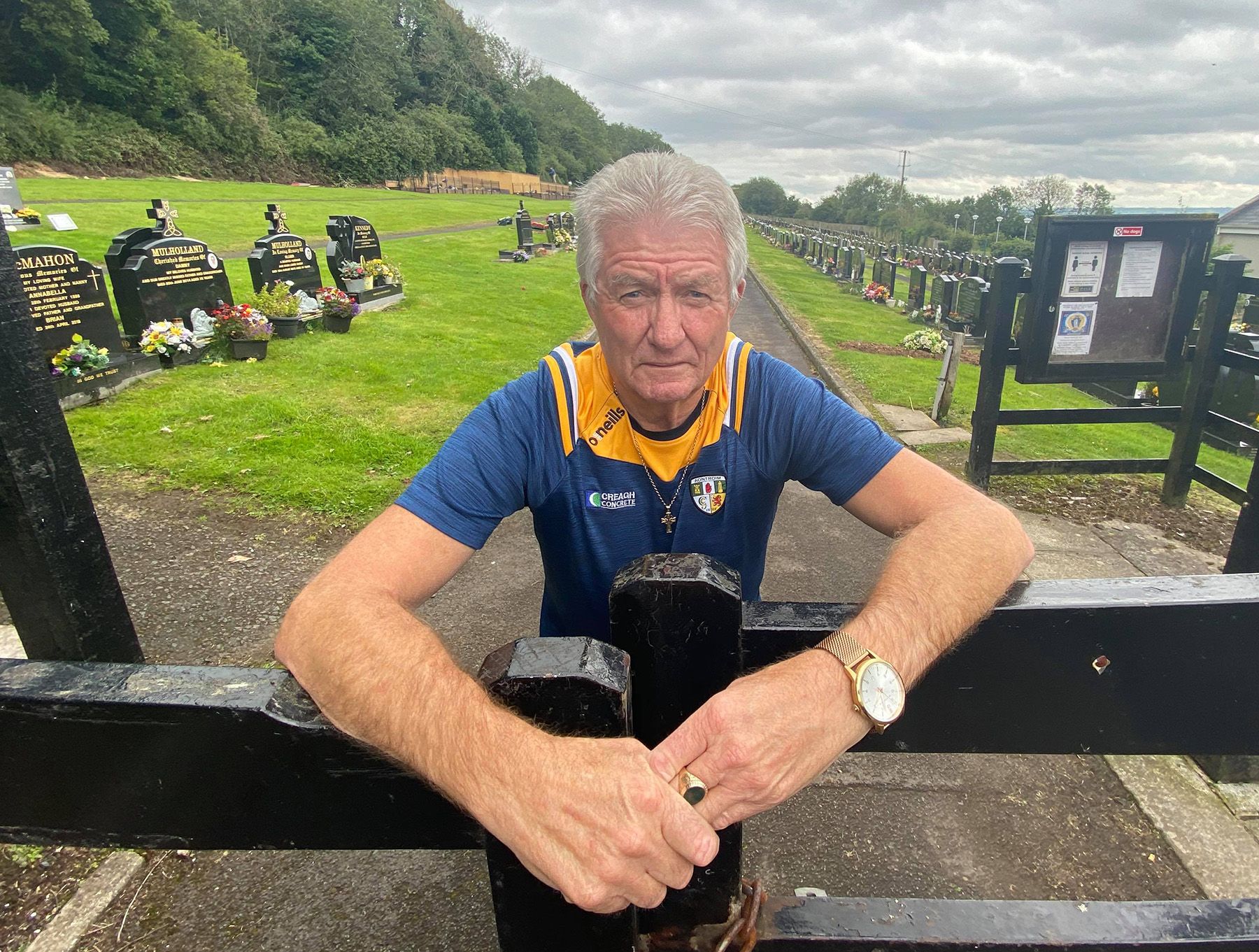 MAINTENANCE ISSUES: Michael Clarke at St Joseph’s Cemetery in Hannahstown where his grandson is buried

A bereaved grandfather, whose grandson is buried at St Joseph’s Cemetery in Hannahstown, has described the family’s sadness due to the  “mess” caused by maintenance work at the graveyard.

Michael Clarke said that family headstones have frequently been covered in muck and grass clippings following routine maintenance at the Hannahstown cemetery.

Speaking to the Andersonstown News, Mr Clarke raised concerns about the use of heavy-duty grass strimmers, which he says are flinging debris onto family tributes.
He told how contractors used a strimmer to cut freshly laid grass at the grave of his grandson, Pearse Connors, who was buried in January.

“Over this last couple of years the people who are carrying the maintenance out are making more of a mess of the graveyard than they are tidying it up,” Mr Clarke said.
“You go out and do work on a family grave and do the best that you can to it, but then you come back and they’ve made a whole mess of the headstone and the surrounds.
“It’s really, really sad.

“To be honest I understand that some people complain at the slightest thing – and I wouldn’t be one of them – but we have a couple of family members up there and we’re all grieving badly.”

Mr Clarke said his family had raised the issue with the parish a number of weeks ago, but were told to “contact the contractor”.

Headstone
“It’s a sham,” he stated.
“It’s gone beyond a joke. Anyone could go up today and clean their headstone from top to bottom, but when they come through to do their maintenance the grave is ten times worse than when we cleaned it. The headstones are covered in muck and all sorts.
“They just use a heavy-duty industrial strimmer, but they don’t do anything to lift the grass. They seem to go round as quick as they can.

“My wife’s parents are buried there a few years and its hurting, but when we go to our grandson’s grave, the grief is still raw. It’s just not on.”

A spokesperson for the parish said: “The parish of Hannahstown engages on an ongoing basis a professional contractor for the maintenance and upkeep of St Joseph’s and Our Lady’s cemeteries.

“During the growing season, the grass within the cemeteries is scheduled to be cut on a regular basis which includes the strimming of grass from around the headstones.
“On occasion, individuals have contacted the parish office to raise concerns in respect of cemetery management and maintenance.

“The parish treats all such complaints seriously and responds to them appropriately. If there are any concerns or complaints regarding cemetery maintenance, then these would be brought to the attention of the contractor.

“The parish would encourage anyone who may have a concern or complaint in relation to any aspect of cemetery maintenance to submit them in writing to the parish office.”