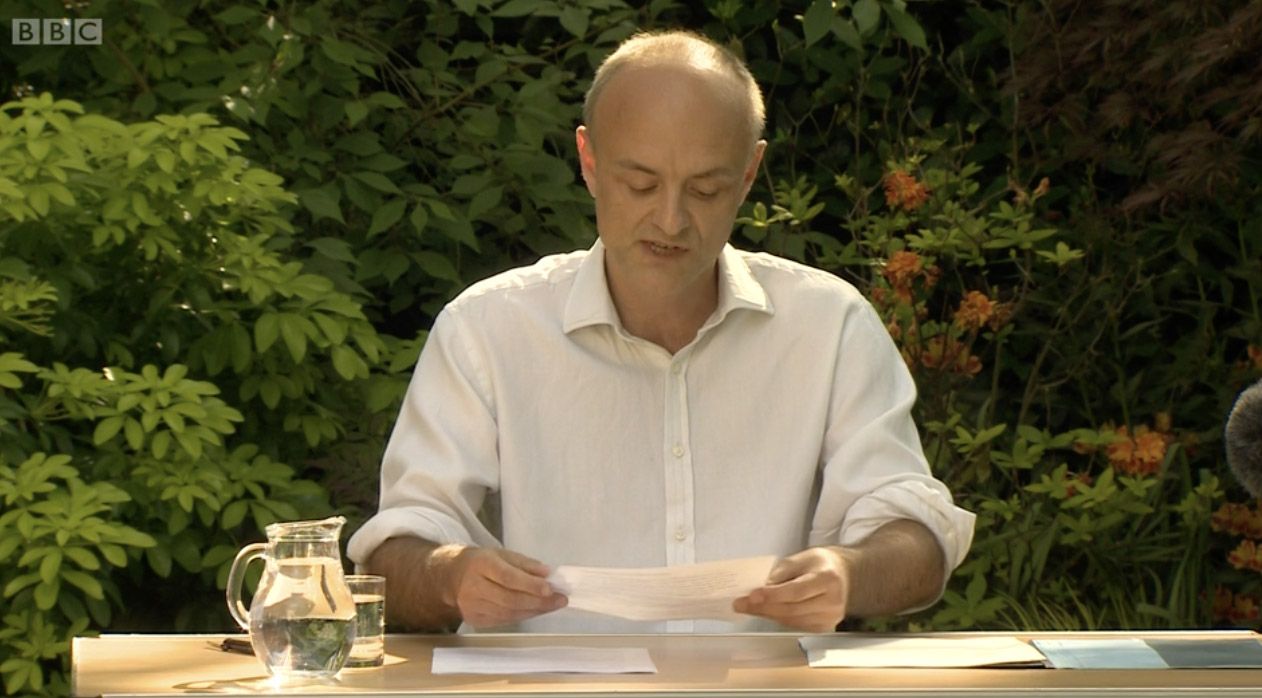 SHAKESPEARE never hesitated to contradict himself. In Macbeth he has King Duncan declare: “There’s no art to find the mind’s construction in the face” – there’s no way of gauging a person by just looking at them.  In Julius Caesar  he has Caesar declare: “Yond Cassius has a lean and hungry look /He thinks too much; such men are dangerous”  – he distrusts skinny, intense Cassius for being a thinker and thus dangerous.

Could there be a better description of Dominic Cummings than that second one?  The appalling clothes, the thin, hungry face,  the eyes swivelling above a tight, determined mouth – you could see that he not only wanted to win the Brexit vote, he wanted to kick over the tables of British institutions  in general.  Not the kind of man you’d want to meet in a dark alley without a hurley stick in your hand.

But now, in this season of surprises, when in the US bulky and sulky Donald Trump refuses to concede, in Britain we have Dominic Cummings, the man we all thought was pulling Boris Johnson’s strings. Then how come this éminence grise is suddenly out of favour and tripping down Downing Street, his box of personal stuff in his arms?

Given that he survived breaching the Covid regulations by driving 300 miles up north to the family homeplace, you’d think he was fireproof.  Word in some quarters is that Johnson’s fiancée Carrie  Symonds couldn’t  stand Cummings, which if true would be slightly hilarious: Why did you sack that man, Boris? Well, the fact is, the girlfriend didn’t like him, so of course I had no choice but to fire him.  Word in other quarters was that Johnson had decided to go for a deal with the EU and that Cummings was a major obstacle, so he simply had to get the heave-ho.

But shortly after the firing, Johnson was at the microphones telling reporters that Britain had to stand by its fishermen and of course by the natural (yes, Virginia, I said ‘natural’) unity of the UK. Yet we were told that Cummings was singing that very same song, right up to the hour of his exit. Can sense be made of it?

It can. There are rumours that Cummings was briefing against Johnson, claiming he was indecisive at a time when clear and consistent thinking was more necessary than ever. Like his transatlantic alter ego, Johnson doesn’t take kindly to criticism.

Conservative and even Labour MPs, like the rest of us, will be glad to see the back of Cummings. He  treated Tory MPs with contempt and was intent on lodging as much power as possible in Downing Street. Now that Cummings has gone, there’s a hope that relationships between Johnson and those MPs – even Labour MPs – will improve.  Jonathan Ashworth, the shadow health secretary, has deplored “the soap opera of these self-indulgent spin doctors” while the pandemic has the NHS creaking at the seams.

There’s also the matter of Brexit, and whether Johnson will stand by the British fishermen and the integrity of the UK.  Whatever about the fishermen, we should all drop to our knees and pray that Johnson doesn’t wave the sovereignty flag as he ensures that goods from Britain to the north of Ireland aren’t checked. Because if they’re not checked, the border between the UK and the EU will be pushed back from the Irish Sea and on to the island of Ireland.

If that happens, the prospect of widespread protest and violence becomes as obvious as lies on the side of a bus.