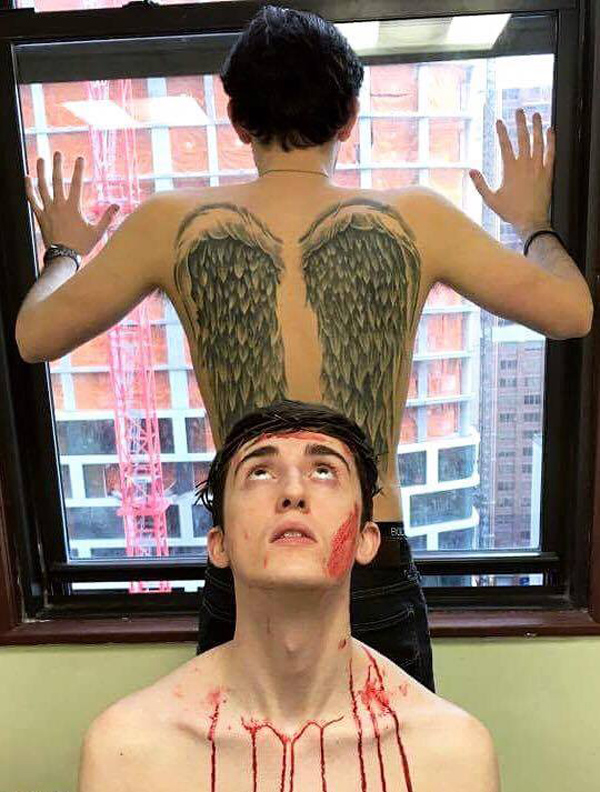 A FORMER Malone College pupil is set to make his theatrical debut on the New York stage.

20-year-old Joseph Jones is starring in ‘Christ Detained by the Department of Homelands Security’ at the Neighborhood Playhouse School of Theatre. Written by Anthony P Pennino as part of the 2017 Planet Connections Theatre Festivity, the play follows Jesus – a refugee, resident of the Middle-East, activist and subversive – as he attempts to enter the United States illegally. Completed a mere eleven hours before the inauguration of Donald Trump, the play offers an angry protest to new US governmental policies that call for the building of walls, deportation of illegal immigrants, and the vilification of the ‘other’. What was Jesus, the play asks, if not all the things we now despise?

Speaking about the play Joseph told the South Belfast   News that the part was written specifically for him.

“As momentous as this journey is for all involved, it is doubly so for me. I was born into one of the poorest neighbourhoods in West Belfast – Poleglass. Despite this, my home was rich in love and support.

Speaking about his love of drama Joseph said: “My first lesson in school was Drama, of which I was initially sceptical. Our first play was 'A Night in November' by local playwright Marie Jones, and I decided to take a leap of faith into this strange new world. Within this production I had the lead role as Kenneth, a bigoted Protestant office worker who changes his outlook towards the corrupt society after attending a sectarian football match.

“This is where I learnt that an actor's job is to celebrate what it ultimately means to be human. Including all of its putrid, disturbing and beautiful moments. If you filter that, you're not telling the truth. That experience catapulted me into something incredible. I became determined, focused, driven, emotionally emboldened and whole. I had found my spiritual home.”

Two years ago Joseph took a leap of faith and went to study drama in New York. This year he graduated from the Neighborhood Playhouse School of Theatre in New York City.

“I am so proud to be a part of this talented community of artists as we have ended our challenging and fulfilling two-year journey under the tutelage of such renowned faculty as Ron Stetson, who trained recent Oscar-winner Viola Davis.

“And I am honoured to pursue my dreams that would make my neighbourhood in Belfast, my family and myself, proud,” he added.