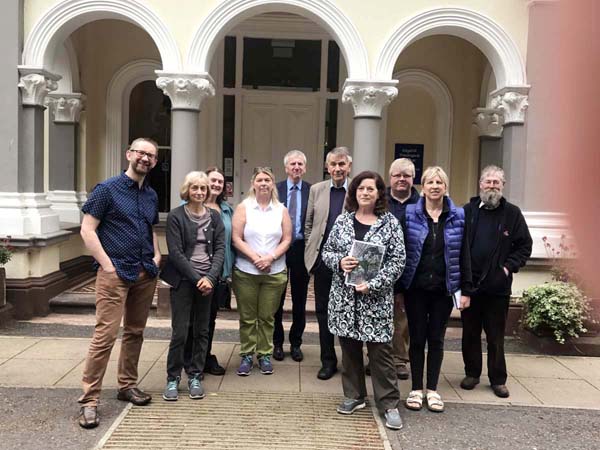 RESIDENTS of Malone have called for new developments to be better regulated in line with Conservation Area requirements.

New developments are appearing with no parking facilities, with the result that residents are being hit with a large increase in on-street parking. And locals are also concerned about the gradual loss of precious green spaces.

Speaking to the South Belfast News, Eileen Sung, Chair of the Sans Souci Residents’ Association, said: “There seems to be no sanction of developers who exceed planning permissions and ignore Conservation Area requirements. Complaints from residents are falling on deaf ears or are dismissed. Residents are fed up and are calling for assurances that Conservation Area policies will be enforced and the 'green corridor' between Lennoxvale and Stranmillis that provides green lungs to an increasingly polluted arterial route be preserved for future generations.”

Eileen added: “When Stranmillis grounds were removed from the Malone Conservation Area and other changes to boundaries announced five years ago, some residents were convinced these changes would enable exploitation of long established woodlands. Residents say these should be public assets with strong protections – they contain some environmentally and historically unique areas in a continuous and linked corridor.

“The woods at Stranmillis were reputedly among some of the 18th century Mass sites. Ponds which passed into Queen's University possession are believed to be part of Belfast's 19th century water service provision, and are of special environmental significance. The Environ-ment Agency has designated the lush grounds of Lennoxvale, Edgehill, Summerhill and Riddell Hall as historic desmesnes of significant interest, while the whole area forms a substantial bat and badger habitat which needs to be protected.

“Residents point out that over the past 20 years piecemeal development has been permitted, with removal of badger sets and destruction of bat foraging territory.”

New developments, say the residents, are approved on a case-by-case basis that ignores the overall impact on the character and amenity of the Conservation Area. Residents are calling for reinstatement of the third party right of appeal which was removed under reforms to the planning process, and for the introduction of Article 4 restrictions which would tighten conservation provisions across the Conservation Area.

Geraldine McAteer said: “In recent months Máirtín Ó Muilleoir and I met with residents from the Malone area regarding their deep concerns that the natural and built environment in the Malone Conservation Area was in danger of being steadily eroded.

“Last Thursday morning, we met up with the residents and during a walkabout in the Sans Souci, Lennoxvale and Malone areas, we heard a range of concerns regarding what they view as the gradual chipping away of the distinctive natural and built heritage of the Malone area. Whilst we were shown some excellent examples of listed buildings which had been sympathetically restored and repurposed for housing, we unfortunately also saw some glaring examples of beautiful old Belfast buildings which were obviously being allowed to fall into decay by the owners. It was also alarming to see large housing developments – approved years ago – crammed into small sites which sit in stark contrast to the built heritage around them.

“As a Belfast City councillor, I believe the new planning authority in the city has a key role to play in the stewardship of our built and natural heritage – a heritage that is both distinctive and irreplaceable and contributes to our sense of place and history. Planning regulations clearly state that our aim should be to conserve, protect and where possible, enhance our built heritage and our natural environment and to manage change in positive ways so as to safeguard that which society regards as significant whilst facilitating development that will contribute to the ongoing preservation, conservation and enhancement of these assets.

“I look forward to working with residents and planners in the coming months to ensure that the natural and built environment in the Conservation area is protected and cherished.”