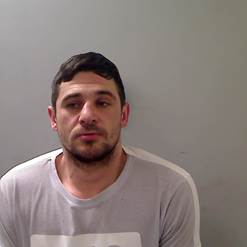 A MAN accused of an attack on a bus lane camera in which a man and woman were assaulted has been arrested.
Gerard Donegan was arrested on suspicion of criminal damage, common assault and grevious bodily harm after the incident on the Falls Road last month.
Police had issued an appeal for the whereabouts of the 37-year-old, wanting to speak to him as part of their ongoing enquiries into the incident on April 17.
Footage emerged on social media which showed a man climbing on top of a Department of Infrastructure vehicle which was parked close to Dunville Park.
He also appeared to grab a woman who had been inside the vehicle by the throat. Another male at the scene intervened and traded blows with the accused before wrestling him to the ground.
A PSNI spokesperson said: “Mr Donegan was unlawfully at large after his licence was revoked by the Department of Justice on April 21, he was returned to prison.”