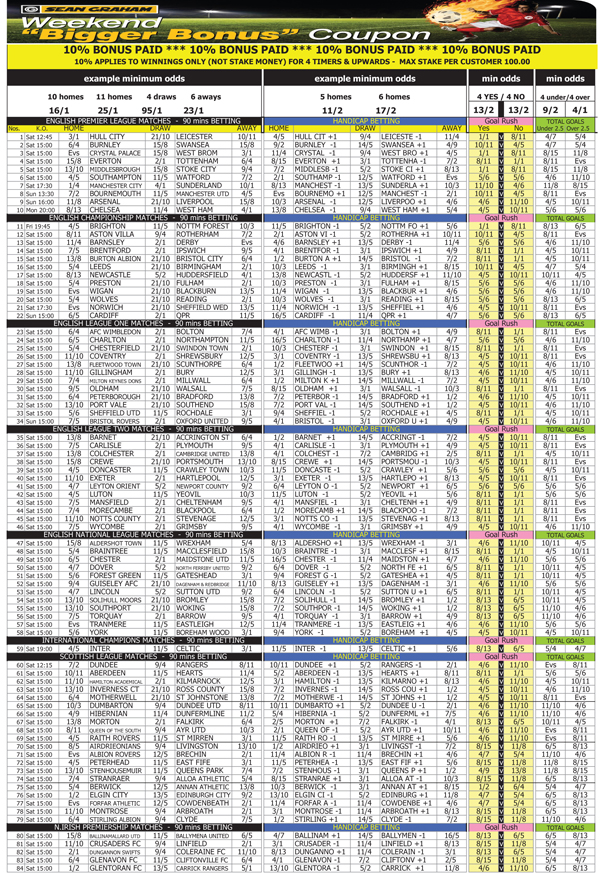 THE English Premier League is back and it looks like the toughest one to call for many a year with at least six teams battling it out for the league title glory in the coming season.

I can’t see that shock Leicester win of last season being repeated this year and I think they will struggle with Champions League football and the Premier League this season and don’t think they will make the top six.

So who wins it? We are drawn to the magic of Pep Guardiola at Man City who are 9/4 favourites with Sean Graham and he has added quality with Nolito and Ilkay Gundogan the marquee signings to his already multi-talented squad.

If Pep gets them playing his way then they will be hard to catch - if he gets rid of Joe Hart they stand a much better chance.

Man Utd (3/1) have brought in Jose Mourhino and again, they have spent big with a mind-boggling world record fee of £89 million for Paul Pogba - again the ‘Special One’ looking for instant success but they’re still in the process of a rebuild at Old Trafford and they could fall short come May.

Arsenal (6/1) finished second last year and blew their best chance in years to reclaim the title. So far, Arsene Wenger has kept his spending to a minimum with Granit Xhaka the big one coming in for £32 million, but he needs to add to his attack and defence for the Gunners to be in the mix.

Chelsea (6/1) have brought in the flamboyant Antonio Conte and to be honest, they look the value of the big four. He has done good business with N’Golo Kante and striker Michy Batshuayi coming in so far and they will be big players this season.

Liverpool (8/1) improved last season under Jurgen Klopp and he has brought in Sado Mane and Georginio Wijnaldum for big money. They will improve again this season and will be in the mix.

Spurs (9/1) had a great season last year but fell short when it mattered. They have brought some steel in with Victor Wanyama from Southampton, but I think they might struggle with the juggle of Champions League soccer.

So here we go - top four time for the PG:

The surprise team could be West Ham this season while we expect Hull, Swansea and Burnley to go down with Michy Batshuayi the value bet at 16s to grab the Golden Boot in his debut season.

All of the other leagues are up and running from last week and we start locally in the Irish League where Glenavon get a general 9/1 pricing and look value over the Crues and Linfield.

Newcastle (2/1) got off to the worst possible start but should prevail in the Championship while Bolton (11/1) look excellent value in League One as do Doncaster (8/1) in League 2.

Celtic are odds-on 2/7 to win the Scottish Premiership with Old Firm rivals Rangers 3/1 - Aberdeen without the champions could be the value here at 5/2. Hibs (10/11) look nailed-on in the Championship while Alloa (9/4) are a solid bet in League One as are Forfar (4/1) in League 2.

Newcastle killed our quad last week on Friday night, but to be fair to the punters, we latched on to the remaining three teams over the weekend which paid 9/1. We are hoping for a better sweat this week and we start in the Championship and are banking on a Derby (21/20) win at Barnsley.

Staying in the Championship and we are taking Leeds (5/4) to get their season up and running at home to Birmingham.

Peterborough (13/8) have made a solid start in League One and can make it three wins in a week at home to Bradford.

Hopefully we have three in the bag as it’s back to the Championship on Saturday evening to complete the quad and we are taking Norwich (1/1) to follow up on that Blackburn romp at home to Sheffield Wednesday.

On to the draw trixie at the weekend and we suggest sitting on the fence in the following Premier League games: Burnley v Swansea, Everton v Spurs and finishing with the Middlesbrough v Stoke game. Remember the trixie bet, double usually pays 12/1 which is better than no pick-up at all.

On to the weekend odds-on acca bet and remember Sean Graham enhance certain PG bets every week, so keep an eye out in all shops and online via our Facebook/Twitter feeds this weekend.

We start in Championship and take another chance with Newcastle (4/6) who should get their season up and running against Huddersfield, as can Aston Villa (3/4) who entertain Rotherham.

We head to the Scottish Championship and Queen of the South (8/11) have started the season well and can see off Ayr while Dundee Utd (4/6) look too strong for Dumbarton.

Again, it’s a bit of a wait to complete the acca and we are hoping Man Utd (8/11) can get off and running at Bournemouth on Sunday.

We are giving away free matched £5 bets this week and next with Sean Graham on this bet (voucher at bottom) so we can only pray for a miracle at the weekend.

The odds work out at around 477/1 and with the free £5 matched bet on top of that - you are looking at a near five grand pay day if they come in - betting dreamland.

On to our lifesaver of last season and we’re hoping we can get off to a dream start this weekend and suggest both teams to score in the following games: Wigan v Blackburn, Southampton v Watford, Middlesbrough v Stoke, Everton v Spurs, Preston v Fulham and finish with the Norwich v Sheffield Wednesday game on Saturday night

Great news as the PG has signed Sean Graham bookmakers up for some free £5 matched bets for the new soccer season starting this weekend and another for next Saturday.

The matched bet will be on all WINRUSH QUAD bets and is worth a dabble with the average quad in these bets paying around 100/1 so you would be doubling those odds to around 200/1.

It’s also 20% bonus weekend at Sean Graham. If you can pick a quad or upwards on featured betting markets in the Premer League and Championship then you get a 20% bonus - check out special coupon in shops.

We will be online daily on our popular Facebook/Twitter feeds with cracking bet competitions sponsored by Sean Graham.