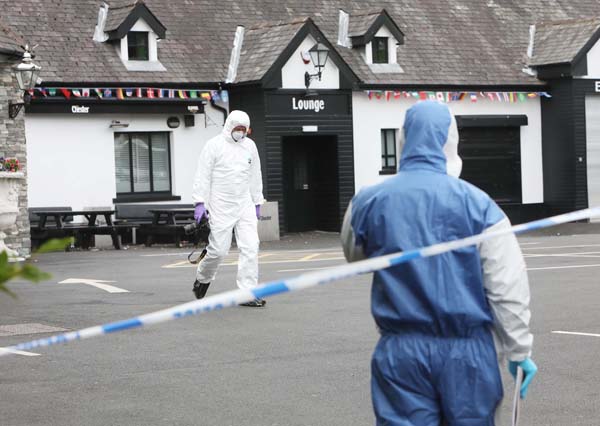 THE Police Ombudsman is investigating the circumstances surrounding the death of a 26-year-old man who died at Musgrave police station.
The man died in the station’s custody suite after an incident at the Chester bar on the Antrim Road on Sunday evening.
He was arrested at around 9.30pm on Sunday evening following a brawl that spilled into the car park of the bar.
It is understood that a doorman suffered serious facial injuries after being bottled during the incident.
Police said that the man died after receiving medical treatment on Monday morning.
The Chester remained closed yesterday as a police forensics team examined the scene.
Detective Inspector Stephen Harvey said: “Tragically, a 26-year-old man who was arrested following this incident, died later following medical treatment while in custody at Musgrave Police Station in the early hours of Monday 9 July. As is normal procedure, the office of the Police Ombudsman has been informed of the matter and has begun an investigation. A post mortem examination will be carried out in due course to determine the cause of death.
“A police investigation into the circumstances surrounding the disturbance is underway. I am appealing for anyone with any information which could assist detectives with our enquiries or anyone who has mobile phone or dashcam footage of the incident, to contact us at Musgrave Police Station on 101 quoting reference number 1561 of 8/7/18.
“Alternatively, information can also be provided to the independent charity Crimestoppers on 0800 555 111.
“As PONI are investigating, it would be inappropriate to comment any further.”
A spokesman for the Police Ombudsman’s Office said: “Police notified us of the man’s death and we commenced an immediate investigation into the circumstances.
“Our investigators have been at Musgrave police station throughout the night, and are continuing to gather information about the course of events leading up to the death.
“We will be speaking to all potential witnesses, gathering forensic evidence, reviewing CCTV footage and securing all relevant PSNI documentation.
“A post mortem examination will be conducted in due course. The man’s name has not yet been released.”
North Belfast MLA Kelly said: “I am deeply concerned to learn about the death of a 26-year-old man in police custody and I extend my sympathies and thoughts to his family at this time.
“I spoke with senior police today [on Monday] and this death was automatically referred to the Police Ombudsman who is now is in charge of an investigation to determine the circumstances surrounding this man's death in police custody.”
SDLP North Belfast MLA Nichola Mallon said: “I have been in contact with the PSNI about this incident. The death of this man while in police custody is deeply concerning and it is right that it is now with the Police Ombudsman for investigation.
"Our thoughts are with this man's family and friends who are having to come to terms today with this horrendous news.”