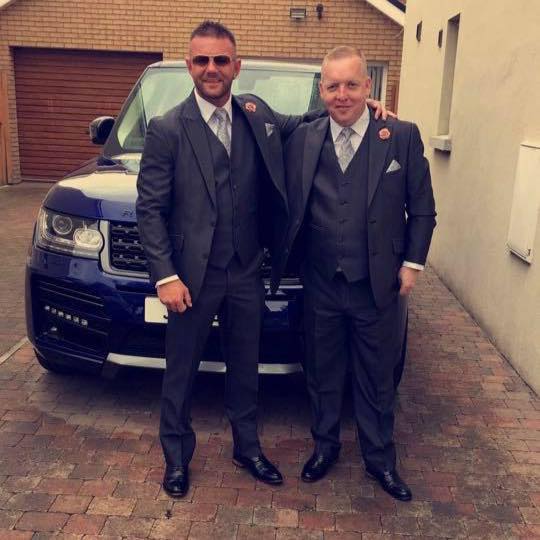 GUNNED DOWN: Sean Fox (right) was a known associate of Jim 'JD' Donegan who was shot dead outside St Mary's Grammar School in 2018

THE man shot dead in the Donegal Celtic Social Club on Sunday has been named locally as car salesman Sean Fox.

Mr Fox had been drinking in the bar around 2:30pm as the Manchester derby got underway on television when two masked men entered the bar and shot him at point blank range up to nine times in what eye-witnesses described as a "professional hit".

Sean Fox, who had previously played Irish League football for Donegal Celtic, was a known associate of Jim 'JD' Donegan who was gunned down outside St Mary's Christian Brothers Grammar School in 2018.

Donegan was shot as he sat in his top of the range Porsche as he waited to pick up his son from school with his killer making his way off on foot into a nearby housing estate.

In a similar manner, it is believed that Fox's killers made their way off on foot into Lenadoon after Sunday's attack.

At the time of Donegan's killing, dissident republicans were said to be behind the hit which was the first in a number of killings linked to the drugs trade within Belfast, as well as the murder of former dissidents who had fallen out of favour with their leadership.

It is believed that Mr Fox had been warned of an attack on his life in the days leading up to his murder.

Police have appealed for anyone with information to come forward.

Detective Chief Inspector John Caldwell said: “At approximately 2.45pm, police received a report that two masked men had entered the Donegal Celtic Sports and Social Club shortly before 2.30pm and shot the man a number of times.  He was pronounced dead at the scene.  Both gunmen are believed to have made their escape on foot along Suffolk Road.

“The investigation is at a very early stage and I would urge to anyone with information or anyone who was in the Suffolk Road area at the time the shooting took place and seen two men running from the club or who may have captured dashcam footage to contact us on 101 quoting reference number 1120 02/10/22.”