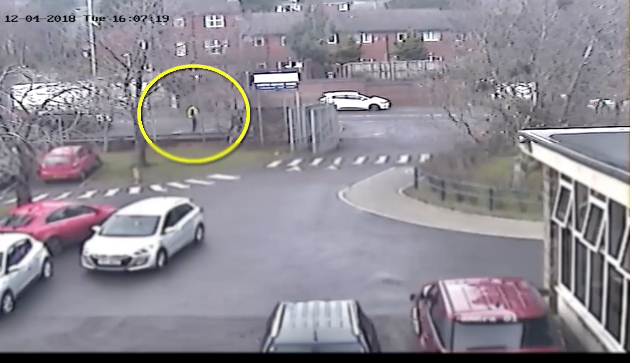 DETECTIVES from the PSNI’s Major Investigation Team have issued new CCTV footage and made a fresh appeal for information one week on from the brutal murder of Jim Donegan.

The 43-year-old was killed as he sat in his red Porsche Panamera waiting to pick up his son from St Mary’s Christian Brothers Grammar School last Tuesday afternoon.

Police are continuing to hunt the gunman, believed to be in his 40s, who was wearing a hi-vis jacket with the word ‘security’ on the back.

New CCTV footage shows the gunman casually activating the pedestrian crossing lights opposite St Mary’s before crossing the road and walking alongside schoolchildren seconds before firing his weapon eight times.

Detective Chief Inspector Pete Montgomery said: “We are now one week into the investigation of Jim’s murder and I am keen to hear from anyone who saw the man who callously murdered him just as the school bell rang for pupils to go home.

"Hundreds of children were pouring out of the three schools in the Glen Road area of West Belfast at the time – many of them witnessing the assassination of the father of two. Jim’s son was spared from this thankfully but only by a few seconds.

"Mums, dads, grandparents, young siblings and people in the community also saw the brutal slaying. The callous actions of the gunman will have catastrophic psychological effects on them all.

“The chilling CCTV footage shows him walking down the Glen Road before stopping outside Christian Brothers Secondary school . He then activates and waits at the pedestrian crossing for the ‘green man’ before walking casually across the road in front of schoolchildren. He then shoots Jim and while fleeing from the scene, walks out in front of cars holding his hand up to stop them before jogging back along the Glen Road and into Clonelly Avenue, where he disappears.

“Were you standing beside the gunman at the lights, were you driving one of the cars stopped at the pedestrian crossing as he walked across, were you the driver of one of the cars when he stepped out onto the road after he’d murdered Jim? If you were please get in touch with me or one of my detectives as you may have information which is vital for my investigation.

“The gunman was wearing a high visibility, hip-length yellow jacket, with ‘Security’ written on the back, dark bottoms, with a grey coloured hat or hood and carrying a black or dark bag over his shoulder.

"I would like to hear from anyone who saw the gunman or was in the area during these times. Were you driving in the area and have dashcam footage which could be of use to our investigation?

“I also want to speak to anyone who was in the area at the time, even if you did not witness the attack or see the gunman as I need to eliminate you from my enquiries.

“A dissident republican element is a main line of enquiry and I am appealing to the community to help identify who put the lives of countless children at risk and murdered Jim. It was utter madness to fire a gun so close to the school as any one of these bullets could have ricocheted and hit the children standing nearby.

“I need to remove this dangerous man from our streets. A man who thought it was acceptable to traumatise young children. Children who should be dreaming of presents and the magic of Christmas, who are now, instead, having nightmares.

“If you were in the area at the time did you see him disappear into a house or car in the Clonelly Avenue area?

“His murderous actions have left Jim’s family devastated, which is even more poignant at this time of the year. Jim was a husband, a brother, a father to two sons and a stepfather.

“I would appeal to anyone with information to contact police on 101.”

Mr Donegan’s Requiem Mass will take place tomorrow (Thursday) at 10am in St John’s church on the Falls Road followed by a service at Roselawn Crematorium at 1pm.