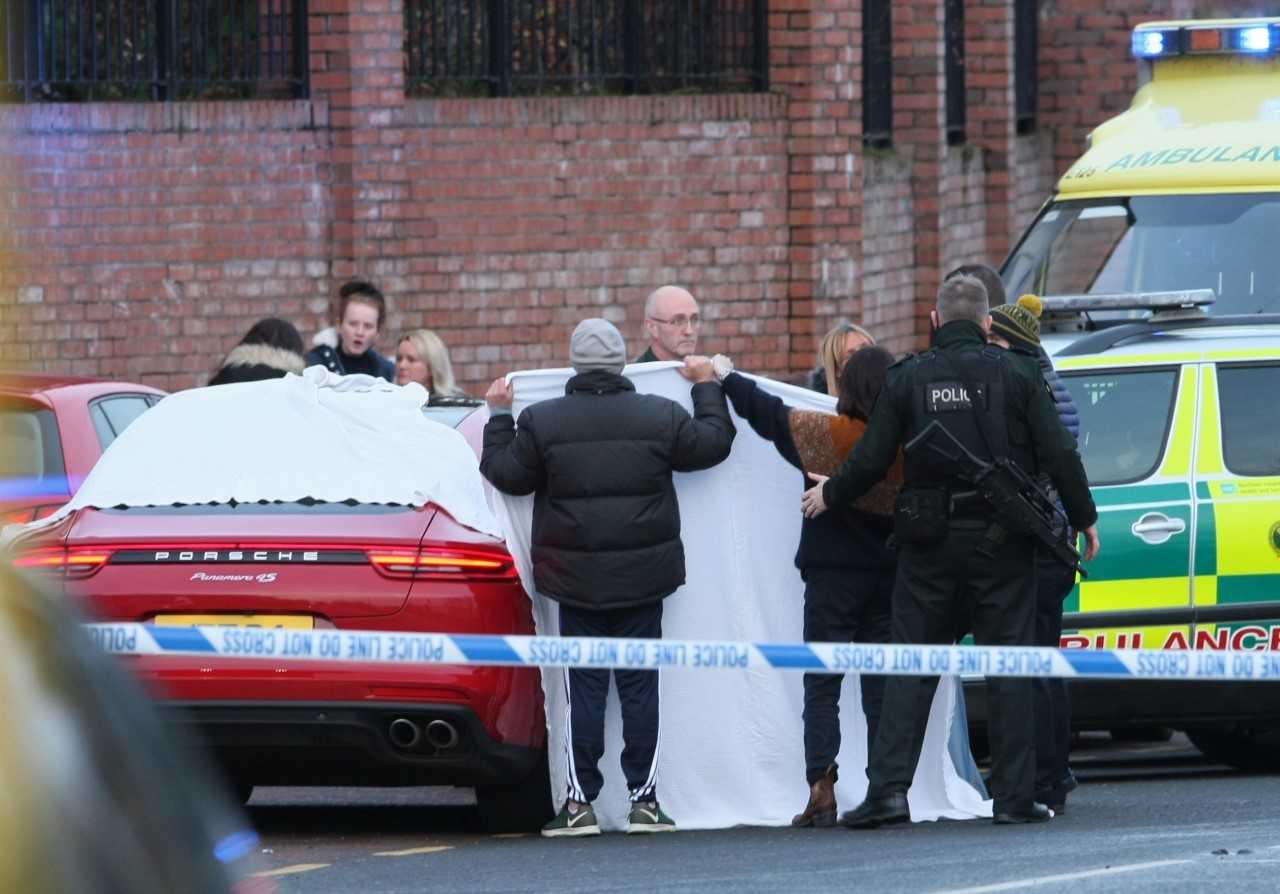 The scene immediately after the brutal murder yesterday afternoon

POLICE are appealing for information after a man was shot dead outside a West Belfast school on Tuesday afternoon.

The victim, who was in his 40s, was shot several times as he waited for his son outside St Mary’s Grammar School on the Glen Road. He has been named locally as Jim Donegan.

Police say the victim was shot dead by a lone gunman in a high-vis vest. They also want to hear from anyone who saw the red Porsche Panamera being driven by the victim in the area or who might have dashcam footage which would help in their investigation.

Detective Chief Inspector Peter Montgomery said, “I would like to appeal to anyone who saw a man in his 40s, wearing a high vis vest with the words ‘Security’ on the back heading in the direction of the Glen Road, as well as anyone who witnessed the shooting or was in the Glen Road area from 3pm on Tuesday, to come forward and speak to police.

“An incident room has been set up in Musgrave Police Station and anyone with information can contact detectives there on 101 quoting reference 741 04/12/18. Alternatively, information can also be provided to the independent charity Crimestoppers on 0800 555 111, which is 100% anonymous and gives people the power to speak up and stop crime.”

The Glen Road between Caffrey Avenue and Airfield Heights remains closed on Wednesday morning with both St Mary’s and CBS opposite closed for the day.

A statement from St Mary’s Grammar School read: “The thoughts and prayers of the Principal and all the staff are with our pupil and his family at this very sad time.
“Ensuring that all pupils got home safely was our absolute focus following this tragic incident.

The shooting has been condemned by local political representatives.

Sinn Féin MP Paul Maskey said: “This is a disgraceful and horrific attack. A man has been shot dead while picking up a child from a local school in the Glen Road area.
“It is deeply concerning that this killing was carried out in full view of hundreds of kids who were leaving school at the time.

“I unreservedly condemn this murder and my thoughts at this time are with the family and friends of the victim."

West Belfast PBP MLA Gerry Carroll said: “News that somebody has been shot several times on the Glen Road is horrible and deeply concerning and should be condemned by everybody. It is especially worrying given the amount of children and young people in the area at that time, that somebody sees fit to pull a gun and open fire in the middle of the day.”

SDLP Cllr Tim Attwood added: “A number of pupils witnessed this fatality and are understandably very disturbed and frightened after this reckless act occurred nearby the school gates. There is absolutely no place for this in 2018."