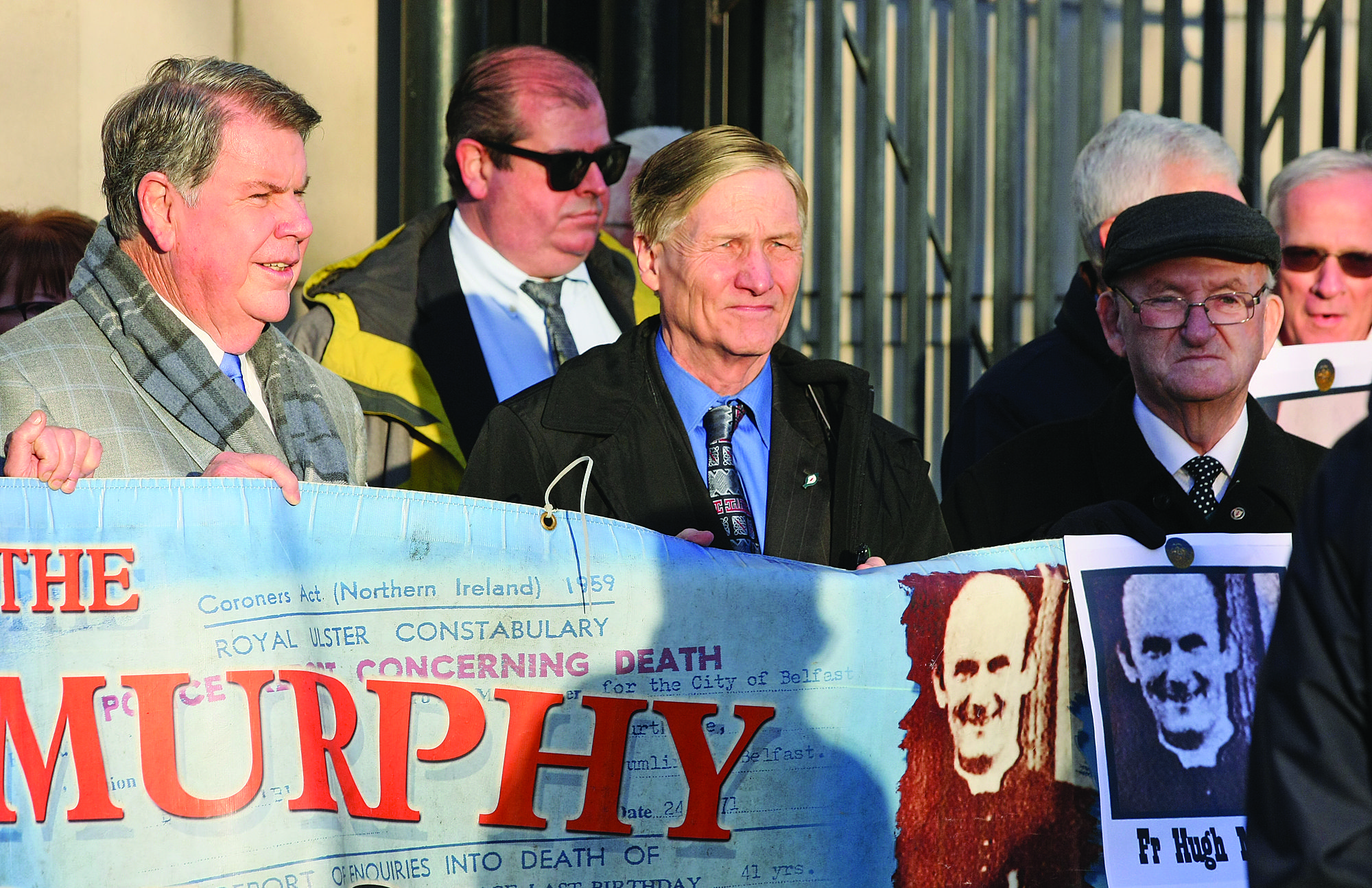 SUPPORT: Martin Galvin (centre) with Ballymurphy Massacre families; he’s proud of the record of the INA in backing Irish republicans

LIMERICK University Professor Robert Collins’ book, ‘Noraid and the Northern Ireland Troubles, 1970-1994’, is a  study of Irish Northern Aid (INA), examining how throughout a quarter century of armed conflict, INA members, despite opposition, and indeed vilification from the British and American governments, provided crucial political and publicity backing for the republican struggle and money for Republican prisoners.

It is remarkable that an Andersonstown News reviewer would turn from the book to insult these republican supporters as being of no “real benefit to Sinn Féin”. (‘Exploring the role Noraid played during the conflict’. Book review by Roy Greenslade, Andersonstown News, 1.10.22.)

Today we enjoy support from President Joe Biden and leading members of Congress. However, as reviewer Roy Greenslade acknowledges, for two decades, at Britain’s behest, the American Government “worked hard to undermine the Republican struggle”. INA and its members were targeted, particularly under Presidents Reagan and Bush (1980-92) who were completely aligned with Margaret Thatcher.

Sinn Féin leaders were blacklisted and denied American visas.  The British told Americans that Irish republicans were “mindless criminals” and their INA supporters “misguided”. Sinn Féin leaders could not come to answer.

Importantly, the author traces how INA helped in ending visa denial against Sinn Féin, a Presidential election issue, with myself, a leading INA member, selected to ask for Bill Clinton’s pledge of a visa for Sinn Féin President Gerry Adams during the historic Irish American Presidential Forum of 1992.

Collins writes of those in America, who despite all obstacles, contributed millions of dollars for republican prisoners, highlighted British injustices which caused the conflict, and won support from Congressional leaders like Mario Biaggi and Ben Gilman. He includes names which deserve remembrance, like lawyers Paul O’Dwyer and Frank Durkan, or elected officials Peter King and John Dearie. Most important is the name of Mike Flannery, a Tipperary IRA veteran of the Black and Tan and Civil Wars, who was there fifty years later to found INA. Greenslade wants all that forgotten because Flannery sided with his friend Ruairi Ó Bradaigh on abstentionism.

Importantly, the author traces how INA helped in ending visa denial against Sinn Féin, a Presidential election issue, with myself, a leading INA member, selected to ask for Bill Clinton’s pledge of a visa for Sinn Féin President Gerry Adams during the historic Irish American Presidential Forum of 1992. Clinton’s Irish pledges followed by election victories opened the door for the American involvement that followed.

The book also covers events which led to that breakthrough. These include blanketmen Ciaran Nugent, Fra McCann, Joe Maguire and Seamus Delaney coming to the US illegally, in campaigns organised by INA across the US, making the H-Blocks an American issue. The massive numbers at daily INA rallies during the 1981 hunger strike contributed to the victory of the hunger strikers over criminalisation and convinced Assemblyman John Dearie to begin Irish issues forums.

Older readers might remember seeing INA bringing Americans to meet Sinn Féin leaders in tours organised by Tom Hartley. When the British retaliated with an Exclusion Order against me, and a brutal attack murdering John Downes and wounding scores more, Congressmen Biaggi and Gilman led a Congressional hearing, humiliating the RUC.

There is too much to list here. INA members came forward because they were inspired by and wanted to help republicans in Belfast and across the six counties. We wanted no thanks, but deserve better than Greenslade’s insults.